Hey look, it's half way through December, must be time to review November's totals, right?  At least I'm doing it before the end of the year.  November was surprisingly a good month for me.  I really had no idea where my numbers were going to be and I was shocked to see where they were.

Run Miles--78.49!!  Yes, you read that correctly--78 miles in November!!  Crazy.  I have no idea how I managed to find the time to run 78 miles, but I did.  I think part of it is that my "short" runs are really no less than 5 miles now.  I find it hard to even bother to get dressed to run 'just' 3 miles anymore.  It seems like such a waste of time.  My shortest run this month was 4 and longest was a half marathon.

Swim--5500 yards.  Slowly getting back into swimming again.  I do like it, it feels good for my body to do something different than running.  It's just so hard to change into a swim suit, go and be cold for 10 minutes during the warm-up, get all wet etc.  It's so much easier to just change into running clothes and run.

Tennis--2 hours  I had skipped tennis for most of the fall because I have to rearrange my work schedule to go and I had decided that I would rather miss work to see the girls' field hockey games than play tennis.  Now that field hockey is over, I can get back to tennis again.  I like it because it's fun and different but I really don't get as good a workout from it like I do on a 6 mile run.

Races Run--I did a kinda virtual Turkey Trot on Thanksgiving.  There was supposed to be an actual organized run that morning but the weather screwed everything up again and the roads were super icy so they moved the run inside the YMCA on the track.  Yuk.  My running buddy, Stacey, and I decided just to go a bit later and take it outdoors.  WAY better decision.

I also did the Santa Hustle Half Marathon this month and it was a BLAST!!  Really, one of the most fun races I have ever done.  Partly because it was actually fun, and partly because I scored a sweet PR, cutting around 7 minutes off my time!  BAM! 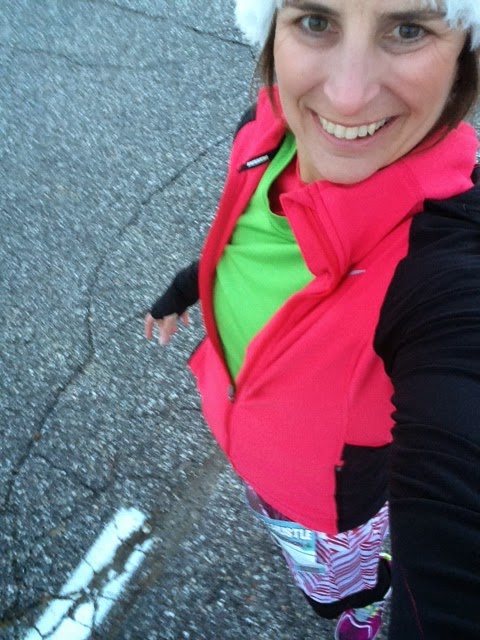 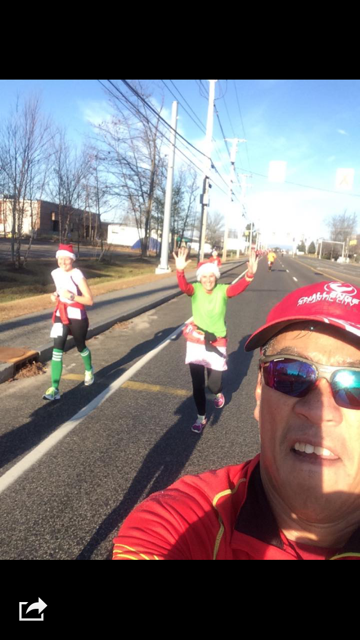 I loved dressing up and I loved running well.  You can read the race recap here if you wish.  But I would totally do this race again next year if they come back.  Loved it.

~FINALLY finished the Game of Thrones Series.  Wow, that last one sucked.  It was long, boring and never really seemed to go anywhere.  I feel like a whole lot of nothing happened and I wasted 3 weeks trying to drudge my way through it.  Otherwise, I really enjoyed the series and I'm ready to watch the tv series now.

~Gone Girl--finished this book in about 4 days.  I had started this one about a year ago and never got into it, but then tried again this week and for some reason, I liked it much better.  Anyway, good book if you want to read it.  The ending was not at all what I expected and it left me a bit pissed.

New Music--all things country, again, all things pop are bugging the shit out of me.
~Chillin It
~Ready Set Roll
~Somewhere in My Car
~Take it on Back
~Beachin


New and Exciting--I guess the biggest thing right now is that after the high of such a successful half marathon, I got all delusional and signed up for a full marathon......  Excited and scared all at the same time.  The feeling I had after that half in November was the first time I really truly felt as though I had the stuff to complete a marathon.  I have never finished a half and not felt like I wanted to die.  This time I felt like I could do more.  It wasn't hard.   So I got all stupid and signed up for the Maine Coast Marathon in May.  On Mother's Day.  Cause really, who doesn't want to run 26.2 miles on Mother's Day?   Seriously, like I've got something better to do that day.

All things basketball are going on right now.  Big Sister made varsity this year and I think she will see some playing time if what happened in pre-season continues to happen during the regular season.  I think we have a pretty good team this year--going in underrated, we may just surprise some teams.  Unfortunately, the weather here has sucked this past week so the first 2 games of the season have been rescheduled.  ugh.  Opener is tonight.

Things I'm Loving
~Loving my running and totals right now.
~Loving my accomplishments this past month in regards to running.
~Loving my weight and size.  Hovering around 137-140 which is excellent for me.  My stomach is close to showing legit abs.  Many of my pants are loose.

Things I'm Hating
~I'm hating this winter.  I'm hating all winters.  The cold sucks.
~I don't usually get all down on getting older but wow, I am really feeling it lately.  I can see how people go through a mid-life crisis.  It's not so much how I feel inside about myself, it's more how I'm being perceived.  Example--20 somethings look handsome to me, they look at me like, mom?   It must be a real struggle for those that have always been so focused on their looks and were always the beautiful ones.  I was never that girl, always very average and blah.  Not the one that anyone noticed at a party.  I cannot imagine going from being the beauty queen to the pretty woman in her 40's.  No wonder all of Hollywood has so much plastic surgery.  The struggle to stay young and relevant is real.
~Dark at 4:30 sucks the life out of me.  Maybe I have seasonal affective disorder.....
~Christmas sucks the life out of me as well.  I wish Christmas were more like how Thanksgiving is and less about the buying of presents.

I hope you all are having a great December thus far and good luck with Christmas shopping and celebrating!