I'm not sure how I used to be able to blog 3 x week because I can't seem to come up with much to say more than monthly lately.  I think part of it is that I used to write about my kids a lot and now that they are older and teenagers, I'm not allowed to write anything that might be even remotely embarrassing to them.  Obviously, that takes away a lot of blogging material. haha  Oh well, soon enough they will be out of the house and I will be missing their bitchy faces.   So on to things I can talk about.....

I have my final surgery planned for 5/24!  Expanders are coming out and implants are going in.  Woot!  I'm not super excited about having another surgery, but I am super excited about getting through the recovery and going back to a normal life.  I'll need general anesthesia again (ugh) but this one is a much shorter and easier surgery.  I don't have to stay overnight and I should be able to go back to work on Monday.

Back before all the cancer business, I had signed up to run the Sugarloaf Marathon and make a BQ attempt.  That is clearly not happening this May, either the BQ or even running a marathon, so I opted to drop into the 15K race instead.  So many of my friends are going to be there and running that I didn't want to miss out.  So I planned to have my surgery directly after the Sugarloaf weekend so I could still participate, but have my 3 weeks of no exercise recovery not mess up my entire summer.

I'm imagining that this surgery will not be nearly as involved as the first one.  The plastic surgeon said he planned to use the existing incision sites so I won't have any new scars.  It sounds like it's just a matter of removing the expanders and placing the implants.  We had some discussion about what type of implants and of course, I have no idea now what we decided on other than I know it's not the "rough" ones that have some incidents of a secondary blood cancer (no thanks) and it's a type that isn't completely round--more teardrop shaped?  I think?  But not super tear drop shaped because those ones needed drainage tubes and no way, no how, did I want those again.  They said I'm scheduled for 75 minutes (which is literally nothing compared to the first!) and a couple of hours in recovery and I'll be able to go home for lunch! woo!  My daughter has a lacrosse game that night I was hoping to be able to see so it looks like that will probably happen!

I CANNOT WAIT TO BE ALL DONE WITH THIS!

I've been taking the tamoxifen for a bit now and haven't had any side effects that I know of.  Unless weight gain is one of them.  Well, I haven't really gained any weight but I haven't lost any either.  And one would think that I would go back to my normal weight of 143-5ish after I started running and exercising again.  But here I am still at 150.  So maybe I need to monitor my food a little better, I'm not sure.  Or maybe it's because I'm 46 now and getting old. Whatever it is, I don't drop weight as easily as I used to. Also, I have been getting pretty warm at night while sleeping and one of the side effects is hot flashes.  I wouldn't call them hot flashes, but I do wake up and I'm sweating.  But that isn't a big deal. I just throw off a cover and go back to sleep.  So I guess tamoxifen will be in my life for a while.

As I said, I have been running around 5 days a week, always at least 4 miles and sometimes more on the weekend.  The weather is starting to get a little bit warmer--it's kinda spring here in Maine.  Full on summer on Easter and then back to winter two days later.  ugh. 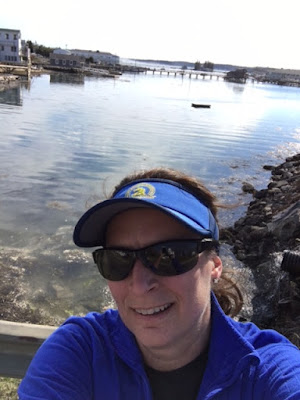 sporting my Boston Marathon visor my friend bought for me.  I LOVE it.

So anyway, that's whats going on in my world right now.  I just want to get back to the business of living my boring, normal life.  And on that thought, I will leave you with this picture of the ugly town I live in.  Poor me. 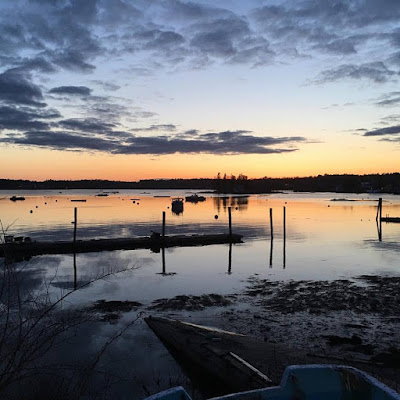