Well, hey, it's been awhile since I've posted.  Guess I've been feeling good and getting back to normal.  I did a couple of races, both 10Ks, and although they were much slower than my best time, I was proud to do them and finish them strong.  The Beach to Beacon 10K was a great moral victory for me in that I ran it in 52:14 which is under 9:00/miles.  I wasn't sure that I was physically able to run under 9's anymore.

But I am.  So it's my head (and my weight) that's holding me back and not my lungs or legs.

I got to meet and run with Joan Benoit during a training run and that was pretty cool.  She's a really nice woman and obviously a super fast runner! 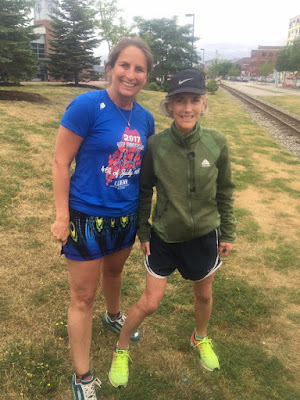 Here's a couple of pics from the Beach to Beacon 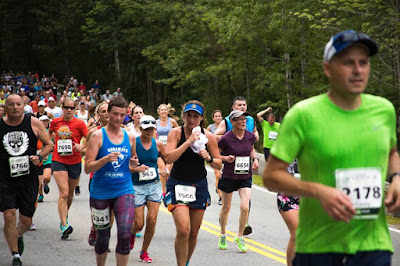 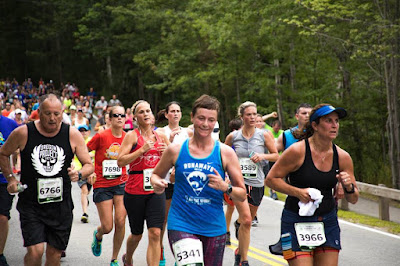 the camera loves me


Back to the comment above regarding being heavier--over the past year, I have gained about 10lbs.  I'm not sure if it was happening before the cancer debacle or just after because I never weigh myself but it was certainly more apparent to me after surgery.  Clothes weren't fitting, running slower etc.  I tried a few things on my own and nothing was working.  I was sure it was the tamoxifen because I was doing all the same things as before.

Last ditch effort before talking with the doctor about stopping the tamoxifen, I decided to try a program that was recommended to me by a friend. Stronger U.  You can google it if you want, but basically, it's a food tracking program where you are allowed a certain amount of macros each day.  Macros are carbs, fat and protein.  You weigh your food, track it all and eat whatever fits into your macros for the day.

Turns out I was eating WAY too many carbs and fat and not nearly enough protein.   Huh.  That could explain the weight gain.....

Anyway, at the start of week 4, I'm down 6 lbs and 1 inch off my waist.  8 more weeks to go so we'll see where that leads.  I have a series of pictures I've taken before and at the end of each week, but I'm not ready to share those just yet.  Stay tuned.


Also related to the weight gain and my considering going off the tamoxifen--I'm glad I did this program and now have an alternative that doesn't involve stopping the tamoxifen.  I haven't really thought about how having had cancer might affect me in the future--I kinda felt like having the mastectomy was the end.  It wasn't in my lymph nodes and that's that.  But the other day I was talking with someone who lost his wife to breast cancer.  We talked about how I was doing and he was glad I was doing well.  He spoke of his wife and how she had breast cancer too and when it came back 10 years later, it came back with a vengeance and meant business.  I never knew her story and I was glad he shared it with me.

But later on it struck me, that could be me in 10 years.  Maybe I only have 10 more cancer free years before this bitch comes back to get me for real this time.

She probably thought she was cured.

Only to find 10 years later, she wasn't.

That, folks, is some hard medicine to swallow.  What if I only have 10 more years?  What if?  What do I want to do with those 10 years?

Well, I'm gonna make them count.  These next 10 years are going to be the best years of my life.  If I want to do something, I'm going to do it.  I'm going to see every one of my kids' games and go to every one of their events at school.  I'll never regret saying that I was there.  If that means driving hours on end, then I'll do it.  If I want to run a race, I'm going to do it.  You better believe there's going to be an Ironman in there somewhere (Stacey, you'd better be all in for this!) and probably another marathon and maybe races in other states and hopefully a trip to Australia.

If I only have 10 years left of this life, then they are going to be 10 years well spent and hopefully, with no regrets.

Posted by ltlindian at 9:05 AM No comments: