This recap has been a little late coming because directly after the race, we left for a 5 hour ride north to get to my parent's house on a lake for vacation.

This is the view in front of me: 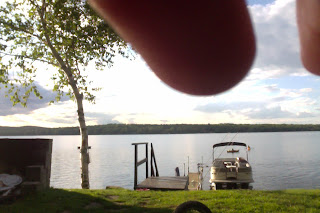 And this is the view behind me: 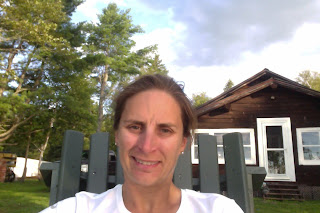 It could be worse.

Anyway, the Beach to Beach was Saturday in Cape Elizabeth, ME.  There was a start time of 8:00 a.m. so I had fully planned to leave my house around 5 to get there at 6.  This is a very large race for Maine so there is very little parking at the start.  Plus, it's a point-to-point race so if you park at the start, you still have to find a way to get back to your car when the race is done.

Last year I parked at one of the satellite parking sites and there were shuttle buses to get you to the start line.  Getting there early last year got me to the start super early and I was able to get pictures with everyone I wanted to and the start line.

This year was a different story.  I ended up waking up at 5 and leaving the house around 5:25.  Doesn't seem like it should matter all that much, those 25 minutes, but it sure did.  There was actually some traffic as I got closer to the parking area and there was a GIANT line for the shuttle.  WTF.  Last year, I walked on to the first shuttle that came, no problem.

I did make a good decision to wait in the porta-potty line there rather than at the race.  smart.  So I got that out of the way.  When I got out, there were 3 huge lines waiting for the shuttle buses.  I noticed that they were taking folks from the first line first, so I hopped into that one.  The bus got full and then left.  Another bus came and we thought for sure that they would load people from the second line, but nope! They filled it with the first line people!  Yay!  I was so psyched because it was already 7:10 at that point and we still had to drive to the start line!

I thought for sure that there might be a battle about the lines, but no one said anything.  I felt a tiny bit guilty for cheating the line, but not really.

We seemed to take the longest route ever to get to the start, but we finally arrived at 7:30.  Last year we had to walk about a quarter mile to the actual start line but this year the bus driver got us right at the porta potties!  So I guess the extra long ride was worth it.

I had made great plans to find so many people, but really only ended up finding two.  Danielle and I met up after some text messages and then I found my friend Bobbi and her husband Greg.  Danielle and I had a total blogger fail and never got a picture... wah wah, but at least I did get to see her.  She looks fabulous after having had a baby just a couple months ago.  Skinny minnie again.

Thanks to the great photographer Greg is, Bobbi and I got plenty of pictures! 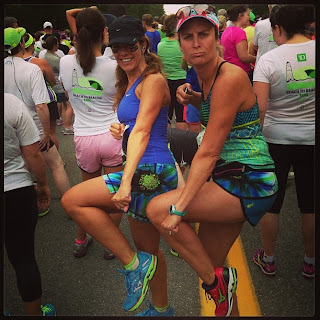 here we are being silly.  me trying to look tough, but I get duck lips instead. #fail 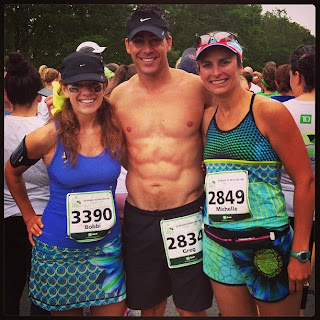 Bobbi, Bobbi's husband Greg and I.    Notice we are all matchy-matchy with the dragonfly pattern from InkNBurn

The run itself was great!  The weather was perfect, probably around 65* and overcast with some drizzle.  There were 6400+ people running this race so it was crazy busy with people everywhere.  Because of our late arrival we never made it up to anywhere near the 9:00 minute mile start line so we were way back behind even the 10:00 minute mile start.   I think we finally made it across the start line about 6:00 into the race! 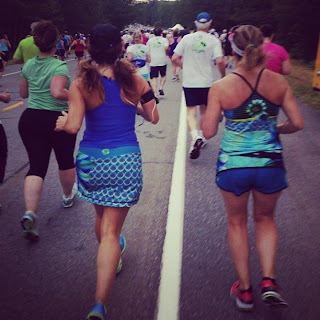 one of my favorites!  I didn't even know he took the picture.  Nice to know I look ok from behind.

It was so fun!  The people along the route we awesome with their cheering and we decided that the race could use some more cowbell.  So we would cheer loudly when we passed by folks who were ringing a cowbell.  There were two places where the fire department had firetrucks and American flags and that was awesome.  It was such a great atmosphere. 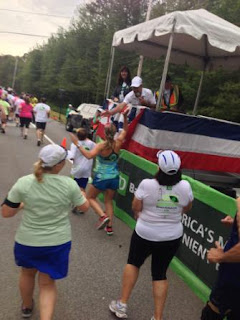 me high-fiving the announcer!


Here I am having ALL THE FUN!

We ran all three together for about half of the race and then I think Bobbi stopped for some water and when I looked back, I couldn't see them so I kept going.   Around mile 5, I found Danielle and her husband.  They were running together so I just kept going on my own.

Unlike last year when it was so darn humid and people were passing out everywhere, it was perfectly cool and everyone was so happy and having a great time.  I loved it!

I love the last little bit of the race where you come into the park because there are people lined up everywhere to cheer you on.  Our race bibs have your name on them so it was great to have total strangers call out your name and tell you you are doing awesome.

I did manage to get a few finish photos this year--I made sure that no one was around me when I crossed the finish and that seemed to work.

I have 3 or 4 finish line photos to choose from.   See them here.  None of them are great but much better than the NONE I had last year.

I love this race and it is becoming my most favorite one to do.  The crowds are crazy and there is no expectation that I will win or place or anything so it's just really fun to run it and have the best time.  I will totally be signing up again next year.

Posted by ltlindian at 5:40 PM

you look awesome! and it was perfect running conditions. damn knee keeping me from running that race! oh well!

I was bummed that I didn't connect with you at the race! We are going to have to get together soon!

yes, we fail at all things photographic. i could maybe photoshop something...
anyway, LOVE your recap. no shame in breaking all the rules we tell our kids (im learning that we lie to our kids a lot now that im a mom haha). still going to attempt to get you to mdi this year... especially since they just added a half marathon option! COME ON! PEER PRESSURE!

You still beat me getting the recap up! Nice job out there. I agree with Danielle...MDI!

That is a really speedy time, glad you had a good race!

You and Bobbi are rocking some really awesome outfits! Great job on the race!