Last Friday I took the day off to get down to Portland to see my dermatologist.  I have the rash thing on my face and the medicine was 7 years old and didn't seem to be working.  Hmmmm,  I wonder why?  Once I knew I was heading down for the appointment, I set up a run date with my friend, Danielle, who lives down there.  Little did I know that it was going to be 7* out that am....

But, being the badasses that we are, we went anyway.  5 miles around Back Cove, mostly on the roads because the run path was snow and ice covered and being the preggo that she is, we didn't want any falling mishaps to occur.  Surprisingly, 7* didn't seem all that bad once we got going.  In fact, I was almost a little too warm when we were finished.

Danielle has been my 'pretend friend' for awhile on twitter and via our blogs but I had only met her for real just last month when we did the Operation Jack 10K run.  It's weird, but I felt like I already knew her even though we had never met.  You would think it would be weird to spend an hour running with someone you've only met once, but it wasn't.  I think that's partly because she's just so nice and someone I would have been friends with anyway, but just hadn't met.  The other reason is that there's just something about running and runners that overall, they are just a nice group of people who are welcoming and genuine.  All of the running folks that I've met via this blog have been really great--Jen, Carrie, Danielle and Jen.  I think it's easier to find friends among runners because you already know you have something in common.

Anyway, after our run I had about an hour to get to the local Y and get a shower before heading to the Dr.  I thought the doc might appreciate me washing the stink off before I showed up to see him.  Danielle got me to the Portland Y and then headed out.  I had to drive around a bit before finding street parking and then I had really about 40 minutes to shower and get to my appointment.  I rushed in and checked in with the desk lady to ask where the showers were because I had never used this Y before.  She said all the keys were out already but I could just knock on the door and it was down that hall blah blah blah.  Keys?  The locker room is locked?  Oy.

So I knock and someone lets me in.  Let me just say, that I must be really spoiled by our really nice, new Y facility in Boothbay Harbor.  I have no idea why they would need to keep the locker room locked.  This locker room was shaped like an O, with the showers in the back and the changing area was like a narrow hallway.  Gah.  This means that in order to find the tiny spot in which I could change, I had to squeeze my way past 7 70 year olds in various stages of undress to the way back of the 'hallway'.  I brushed boobs and butts and just tried not to think about it.

The showers were 3 shower heads in a gang style shower.  Didn't gang showers go out in the 70's?  I opted for the one shower that had a curtain--I guess it was the handicapped shower because it also had a stool.  Screw it.  There weren't any wheelchairs in there so I was taking the curtain.  Honestly, I don't think a wheelchair could have even fit through that hallway locker room anyway.  Fastest shower ever and I was out of there.

Never will I ever complain about our YMCA again.  It is the Taj Mahal compared to this Y.

Sissy had playoff games for her 7th Grade Busline League Friday when I got back from the doctor.  They won that game so they got to move on to the Championship on Saturday--which they won also!  Sissy had a great game with some great foul shooting, ball handling and 12 points.  They finished the season 16-1 and won the regular season trophy and the championship trophy!  Such an exciting day for her and us.

Follow this link and you can see my kiddo eating that girl up.  #33 white team.  Or here. 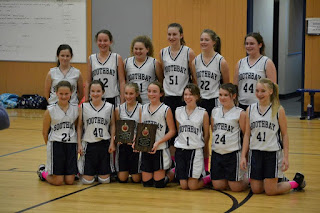 My kiddo is in the front middle holding the trophy on the right.

Have you ever visited another gym and been grossed out?


Don't you agree that runners are the nicest people?
Posted by ltlindian at 11:13 AM

I agree runners are nice people! Its always amazing that you can strike up a random conversation with a group of runners that you have never met before. :)

Runners are the nicest people and you always have something in common to talk about with them ;0