Yesterday was the Maine Lobster Ride which is a large group ride along Maine's coast with distances ranging from 15 miles up to a century.   My friend and I had registered for the 50 miles.  I thought if I were going to tackle 70.3, I probably ought to ride 50 miles at some point.  So this was the event.

It is put on by the Bicycle Coalition of Maine and this ride was recognized by Bicycling Magazine as one of the top 10 centuries in the country!  Right here in Maine!  Bonus for me, it was only an hour from my house.

The weather was *perfect*.  I mean perfect.  The humidity had finally broken and it was a lovely 58* when I woke up.  Cool and clear.

I left my house at 6 a.m. for the hour drive up.  It took even less time than that because there was literally, no traffic at that hour.  So I arrived super early (which I like) and had plenty of time to check in and grab some breakfast.  They had donuts and bagels for the riders as you checked in, which was great since I hadn't eaten anything yet and knew I would need something before 50 miles.

I checked in and got my bib and map and instead of t-shirts, they give out socks.  Which happened to match perfectly with my Tough Chik kit. 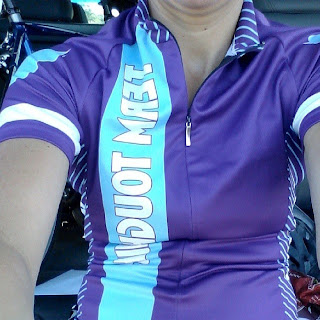 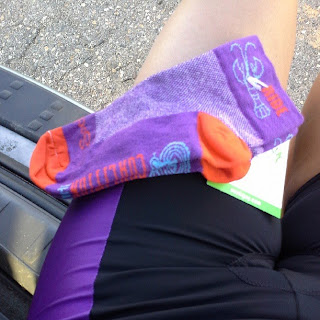 Of course, I put them on immediately.  How could I not?

My friend arrived and we got her all checked in and then it was almost time to start.  I wish I had thought to get a picture of the people lined up for the 50 miler.  There were so many.  I had never been to a group ride before so I had nothing to compare it to.  The 100, 80 and northern route 50 milers had already gone, so this group was just southern route 50 milers.  It had to be around 200? bikers?  So many.

I never saw so much spandex in my life.  Some of it good and some of it bad.

A shorter, older man with a large belly was getting ready and he was wearing one of those unitard biking things.  You know, the ones that look like a wrestling uniform?

Not a good look.  Hairy chest and all.  Seriously man, put your bike shirt ON please.  There are children here. 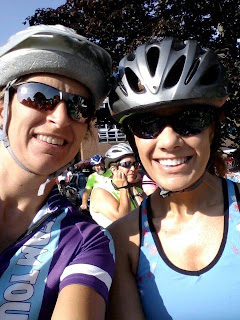 Anyway, the ride started a little later than it was supposed to and it was slow at first with all the bikers.  We had a police escort for the first mile or two at 12 mph, so that was hard to pedal that slow with so many bikes around.  It finally loosened up around mile 6 and we could ride pretty comfortably that way.

It wasn't a timed race and I was riding with my friend, but it was still pretty hard to not want to ride as fast as possible and try to get ahead of people in front of you.  I would race up hills to challenge myself (and beat people) and then take it easier on the flats and chat with Bobbi.

There were two scheduled rest stops along the way and of course, they were scenic.  I didn't get a picture at the first stop, but we had another rider take a photo for us at the second stop.  He seemed like photography was his real-life job and if it wasn't, it should be.  He took great care to get that lighthouse centered between us. 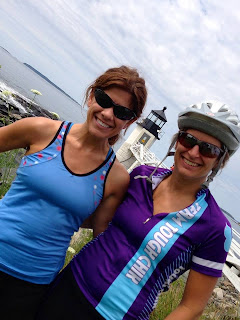 Maine is so ugly.  Don't waste your time coming here.

The rest stops were well stocked with snacks and drinks.  They had water to fill your bottles with and you could add powdered gatorade if you wanted.  The first stop had nutella and bananas on graham crackers (YUM), granola bars, plain bananas and cheese cubes.  The second stop had the above stuff but also M&M's!!!  I was psyched.

The first two legs of the ride were about 13.3 miles each and the last was around 23.5.  I thought the last leg would seem like forever, but it really didn't seem any longer than the first two.  The road itself was great for the majority of the ride.  The pavement was even and there weren't a lot of spots where there were cracks or danger areas.  If there were, they were well marked with warning paint.  The last 4-5 miles of the loop the right side of the road was horrible.  You could tell that was where the frost heaves occur in the winter because there were so many cracks and the pavement was all uneven.  That was my only (kinda) complaint.

My bike started making a weird ticking noise right from the get go that had me a little worried.  I had noticed it on another ride, but not on my most recent one so I never brought it in to be checked.  It started making it when the chain was on the large gear in the front (the one I used the most), but would go away when I needed to shift down to go up a hill.  By the end of the ride it was clicking in every gear and I kept thinking that something was going to just fall off.  But it never did.  I'll be heading to the bike shop this weekend to see what that was all about.

The ride took us about 3 hours and 45 minutes including the time spent at the rest stops.  We spent about 10 minutes at the first and 15-20 at the second.  Overall, not too bad for our first 50 miler.

I personally felt *awesome* on this ride.  My legs were strong and I could have ridden much faster and harder if it were that kind of race.  My only pains were some upper back/lower neck pain after the 40 mile mark.  I'm definitely going to get my handlebars raised a little.  I didn't need to rest at the rest stops and when I was done, my legs could have ridden another 20 miles without problem.  In fact, I almost went out for a run after because I've never done a brick workout and my legs felt fabulous.

But then I saw the lobster rolls. 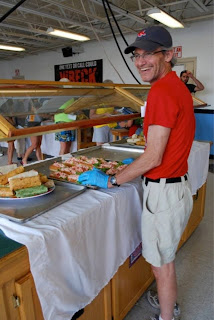 So I ate instead.

The after-ride lunch was part of your registration fee, you just had to get a ticket by showing your bib.  The food was really great and plentiful.  There was cole slaw, cookies, watermelon, and of course, lobster rolls. (For you weirdos that don't like lobster, there were wraps.)

The Good:
Great meal, great ride, great weather.  Just great.  All of it.  The people were so nice everywhere you went.  I do believe that bikers are just as nice as runners.  People called out "on your left", "car back" and would also point out potential danger spots as they were riding in front of you.  The motorists were either really nice, used to bikers or were well aware of the event because they were very courteous as well, giving plenty of room when passing and being patient about passing when it wasn't safe.

The event was well organized, with plenty of parking and people to help you park properly.  There were plenty of volunteers to keep all lines short and moving.  I loved the socks and loved that they match my kit. There was also support at the rest stops and volunteers driving the course to see if anyone needed help or a ride back.  That was comforting when my bike starting clicking.

The food was great and there was plenty of it.  If you were hungry it was your own fault.  They had breakfast, snacks and lunch covered and all of it was good.  The drinks were cold and plentiful and there were also plenty of bathrooms for those who needed them.

The Bad:
I have no complaints about this event at all.  It really was that good.  I didn't love the crappy-ish road the last 4 miles of the ride, but that is no fault of the race coordinators.  We can thank good ole Mother Nature for that.

My bike clicking and making weird noises was the only thing that was kinda bad.  It didn't prevent me from shifting or riding and nothing broke but I was a little worried about breaking down.


This triathlete/runner has maybe found a new love.  Biking is awesome and I thoroughly enjoyed myself yesterday.  I highly recommend this ride to anyone who enjoys biking or wants to try a group ride.