The Maine Half Marathon was a race I signed up for during the summer because I was going to run it with my friend who had never run a half before.  I had run this race two years ago in the 50* pouring rain and it sucked.  Read all about it HERE.  Unfortunately, Bobbi didn't end up running it because she was injured.  But thankfully, I found Danielle was running it just 4 months after having her baby!  She is awesome!

I went back and forth between wanting to run it and not wanting to run it.  In fact, I decided just that morning at 5:15 that I was going to go.  I had nothing set out and nothing packed.  See, part of the problem was I hadn't done any long runs over 8 miles.  That's some good training right there.  The other issue was that my son's soccer game was at 9:00 a.m.  I couldn't do both.  I was really torn between doing the thing I said I was going to do and paid money for, and being the good mom and seeing my son play.

I did the selfish mom thing and went to the race.  I still have a little mixed feelings about my choice, but I hadn't missed any of his other games and he still has his tournament in 2 weeks that I am going to see all of.  So I went.  To make up for it, I took the kids apple picking in the afternoon.  That gets me back my good mom points, right?

Anyway, I got up around 5:15, banged around in the dark trying to collect all the crap I need to run for 2 hours straight--sneakers, clothes, fuel belt, music, ear buds (where are the damn ear buds???  there are 50 pairs when I don't want them and none when I do want them..), water, bib, clothes to change into.  Jeez, this getting ready for a half marathon thing takes a lot of time and stuff!  Probably should have done something the night before.

I left the house around 5:45 and headed to Portland.  I got there super early, which is great, and scored a perfect parking spot, maybe a 100 yards from the start/finish!  Score!  No lines for the potties.  Double score!  After a bit of texting, Danielle found me and we headed over to the start. 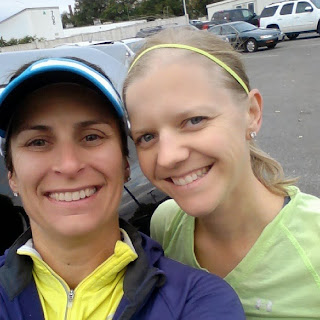 so happy there's no rain

We found Danielle's friend, Kristal, and then it was time to run!  The first mile seemed like forever.  It goes along Back Cove in Portland and I don't know if it was all the people or what but it seemed to take the longest time to reach the mile marker.  The route was a little different this year because of some construction on the bridge but I barely remember the course from 2 years ago, so other than the addition of some hills that sucked, I didn't find it much better or worse than the other course.

Not sure which mile it was, maybe Mile 4?, but we were overtaken by the moose man.  A bit humiliating, but he was indeed faster than us (me). 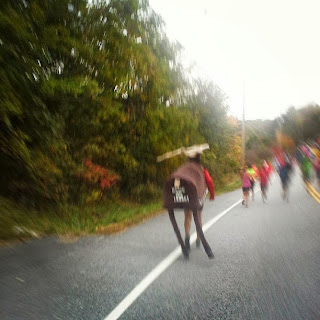 a man wearing a mailbox that looks like a moose.  Antlers and all.  And he ran a half marathon.  Maybe the full, not sure.

Right around Mile 6 we saw a girl pushing a stroller-like thing.  As I got closer, I could see a sign that said "assisted runner" and that she was disabled.  I yelled a little "you go girl!", and then could see her face as she looked up with a big smile.  It was familiar.  I looked to her bib for her name.  I knew it!  I knew her!  She was my patient!  With a little bit of tears in these eyes that never cry, I ran over and hugged her and told her how awesome she was.

This girl was a perfectly normal teenager all the time I saw her in high school.  She had something happen while in college that caused cardiac arrest and she has since been disabled.  It was a total shock to see her out running.  Just amazing.  I should remind myself of that when I start to whine about my pains and feel like I want to quit.

Mile 8 was difficult because there was a big hill.  I still had Danielle with me, thank god, because I probably would have walked it.  She was all like "you can do it!" and "this will be easy!", like she was just heading out to get an ice cream or something.  I need more Danielle's in my life.  After that friggin hill I think I started to slow my pace some.  Danielle went on ahead because she some speedy marathon runner, or something like that, which was fine with me.  I didn't want to slow her down because I knew I was getting to that hard place.

I thought Mile 9 would be uplifting because I knew I only had a 5K left to do, but somehow it wasn't.  My ankle started to hurt.  It felt like I had twisted it but I couldn't remember doing it.  It hurt so much on and off that I started doing this limping, hobbling thing.  I'm not sure that helped any because my knee started hurting.  I can't even imagine what I looked like then.  Men, women, grandma's and kids on tricycles (not really, but you get my point) were passing me then.  I'm surprised I didn't see the lighthouse guy sprint by me.

The last 2 miles suck so fucking much because you can see the finish.  And you can also see how much further you have to go to get there.   I used every once of will that I had to go that last 2 miles.  And for once, I actually had some recognition crossing the finish.  "Here comes Michelle Bouchard of Boothbay Harbor!  Great job Michelle!"  I was the only one crossing at that particular moment!  Yay!  That means I'm probably going to get a finish shot.  This is a first. 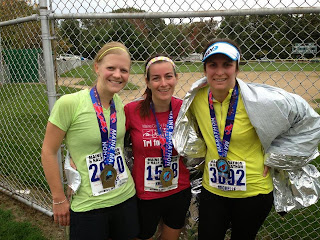 danielle, kristal and me.  they are all like, Let's get pizza! and I'm all like, I can't fucking stand up.

Can you even believe how awesome the finisher's medal and the shirt is?  This race swag rocked! 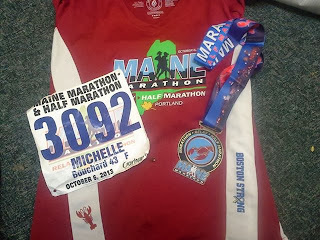 see the cute lobster and the Boston Strong?

The lobster on the medal is on a disc that spins inside the outer part of the medal.  My best looking medal so far.

So to summarize the 2013 Maine Half Marathon and my experience this year:

~I suck at being a mother.
~I am a mediocre runner that gets chased down by moosemen.
~I need to do more long runs.
~The race swag was more than spectacular.
~The weather didn't suck.
~Always be grateful for what you have, because someone else is working harder with less.

Remember that the moose is really fast, and that he is also fast as a lighthouse. GRRRRR!!! Congrats on a great race, I'm glad you guys stayed dry (I did not...) and i'm jealous of your race swag because Smutty's is lame and I came home with a half marathon medal which makes me sad, whoops! :-)

this is a fantastic race report! you are not a bad mother, you went apple picking!! :) im sorry i left you out there (bad runner friend) but hey you got your PR ;) xoxo and damn that moose man!!

It is so beautiful out there.

It was so awesome to meet you! Your description of the last two miles is perfect!!!
I hope we can run together again soon.
Great job on the PR!

Wow what a flurry of emotion in this post!!! Great job getting out there and, although I don't have kids, it sounds like you balance it just fine (therapy shouldn't cost you much either...:))