The postings on this blog has gotten few and far between lately.  I don't have much to talk about with no races on the schedule.  I'm still running, probably more than usual, but none of it is really blog-worthy.  I run alone, mostly during the day or early evening and mostly on the road but sometimes the trails.

Life has slowed down a bit, which makes things a little less crazy at home.  Last night the entire family was at home by 5:15!  Everyone.  Nothing planned.  No activities.  We cooked a real dinner and ate it together. Imagine that.  The kids carved their pumpkins and were still in bed before 8.  Ahhhh.

So this is a little bit of what my boring ole life has been like lately. 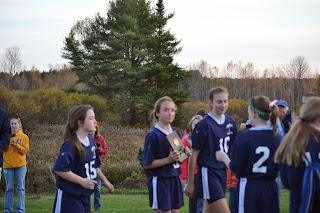 receiving the runner's up trophy--not super happy about it. 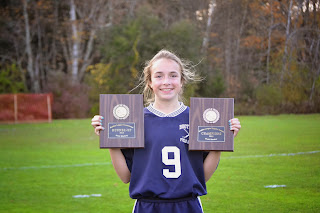 A sad last game for sure, but our field hockey team has not won anything for a really long time so to be the number one team at the end of the season is fantastic! 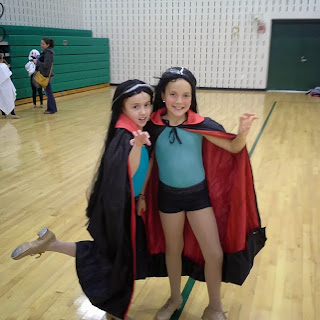 Dance recital number 1 is out of the way.  Princess' dance studio does 3 recitals a year:  Halloween, Tap Nutcracker and the spring recital.  The girls did a tap routine to The Adams Family and a jazz routine to Bruno Mars Just the Way You Are.  One down, two to go.

FYI--Elvira hair is not easy to work with.

This past weekend, Big Sissy had a 3 hour tryout for club field hockey.  Three hours is a long time to sit and wait in a not-so-warm indoor turf facility so I ended up going for a run.  I didn't have any Garmin with me so the guys at the dome told me the high school was just down the road and they had a track there.  I ran to the high school, about 1 mile, and then did 6 x 400 on the track.  I timed myself even though I have no idea what time I was shooting for or what is even good for my ability.  The splits were:

Afterthought:  My legs were so sore the next day!  Sprinting kills me.  Maybe I should do it more.  Hmmmm.


I found a recipe on facebook, of all places, that was a new way to make spaghetti squash.  I've done the usual and replaced my pasta with the squash when having red sauce and meatballs, but that is getting old.  This one ended up being very tasty.  Cook the squash first by cutting it in half, scooping out the seeds and placing the halves face down on a cookie sheet.  Bake for 20 minutes or until done.  Scrape out the squash using a fork and place in a bowl.  Saute onions with olive oil (and butter, yum!) and whatever spices you like. Add the onions to the squash when they are clear.  Add shredded cheddar cheese and sour cream, I think the recipe called for 1/2 c. of each but I just add until it looks good.  I suppose you could use plain greek yogurt if you would prefer.  Mix it all up and then bake in a casserole dish for 20 minutes.  YUM!

I have eaten the whole thing already and I only made it last night.  Therefore, no picture.  #bloggerfail

Do you use the track for your workouts?