One wouldn't know it's November by my choice of clothing today or the weather.  It's a balmy 63* here in Maine.  Crazy.  This fall has been so fantastic, we are going to be spoiled for all other falls.  Pretty sure we won't ever get another one like it.  The only fail was Halloween when it rained.  Pissing on your parade.  Well, pissing on your Halloween.  Whatever. 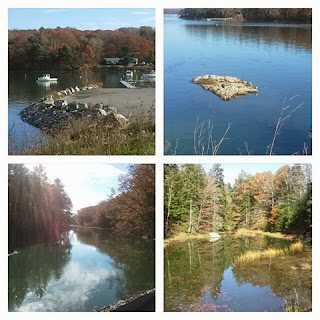 A collage of pictures from my run this morning.  Maine, on November 1.  #notnormal

Anyway, it's time to recap the past month.  Here goes--

This might be my highest mileage month ever.  I know that's pretty lame for most of you, but 50+ miles is pretty damn good for me!  Here's hoping I can keep it up in the coming months.  It's going to be a little difficult with the time change but if I keep myself going with races, that will keep the number up.

A bit lame but not entirely my fault.  The pool is finally open on Sundays now so that will make it so much easier to get my swims in.  It seems like something happened every Friday that prevented me from getting out of work early enough to get to the pool before it closed at 1.  If I can't leave work by 11:30 then it's not worth going.  Next week they are going to be keeping the pool open until 2 so I shouldn't have any excuses for not swimming on Friday.  Even if I get stuck at work.  #noexcuses

Eek.  Pretty lame.  Probably is time to move the bike inside on the trainer and it might get used more.  Again with the kids schedules loosening up now that fall sports are over, I should have more time to get to a spin class or spin at lunch time.

I just didn't make it to the Y very much in October and if I don't get to the Y, I don't do weights.  My core and arms are showing it too.  That one day I worked on my arms and abs, I could barely do 20 pushups when I had been up to 40 without stopping.  So weak now.  There really is no excuse for my arms becoming that weak since you can really do pushups anywhere.  I don't need to be at the Y to do pushups.  I should make myself do 20 before bed each night.   That won't take any time at all and no equipment needed.

I raced the Maine Half Marathon at the beginning of the month and even though I didn't do as well as I hoped, I did beat my previous best time.  And I got to run with a really cool girl.  And I met a new friend.  And I saw an old friend.  And I was inspired by her.  There may have been some tears.  By more than one person.  And it didn't rain.   And I had a finish photo.  Even if it was not very good. 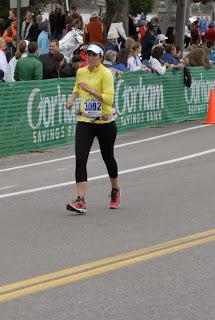 But it was worth it to make this meme. 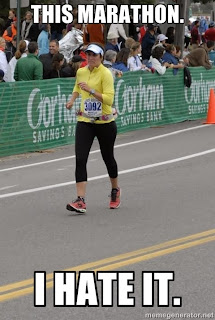 ~The weather continues to be perfect.  I can't remember a fall that was ever this perfect.
~ USCellular is going to be carrying iPhones in one short week!  I can now join the cool kids!!! #cantwait
~I love my hair all brown.  I darkened it last month and stopped trying to be blonde (I'm not).  I have gotten so many complements on it and how nice it looks.  Makes me wonder how crappy my hair looked before.  You know when you get those complements--Oh I love your hair!  It looks so much better!  You look so much younger!  Translation:  Wow, you finally did something with that rat's nest you had on your head before.  Good thing because you were really beginning to look like an old hag.  Now you only look 50 rather than like you have one foot in the grave.  Now pull out those chin hairs and you'll be doing something.

~I guess I'm not really hating it per say, but I really don't care for all this beard crap this is going around. Like all men everywhere forgot what the heck a razor looks like.  Can you imagine the uproar if woman all over stopped shaving?  Please men, give us a break and shave your damn beard.  I get the team unity and superstition thing with the Red Sox, but none of those men are nearly as handsome as when they shave.  And really that's the only reason to watch baseball as far as I'm concerned.  Please, Jacoby, hear my plea!

~What does the fox say?  Who the fuck cares.  That has got the be the stupidest song I have ever heard in my life.  And they are actually playing it on the radio.  Those people who made that song should be shot.  Or maybe they had too many shots.   But seriously.  That song has got to go.  And if you don't know what I'm talking about, consider yourself very lucky and don't google it because you'll regret it.

~Turning the clock back.  Oh, how I hate that.  Well, I do like the extra hour of sleep that seems to last for the whole week, but darkness at 5:00 really sucks.  I think I complain about this every year so I'm sorry if you've heard this from me before.  I need to move closer to the equator.  That would solve the problem.  Or move to Arizona.

~Still waiting to get my root canal.  I think even though that totally sucks, it will be so wonderful to have relief from the pain of this tooth and the TMJ it is causing.  18 days and counting.

How was your October?


What are you loving and hating this month?

yay for US Cellular finally getting on board with iPhone!!! Darn that we're in a contract with Verizon. I loved US Cellular

Great meme! I haven't heard this what does the fox say song, must not be country music ;) I do know I hate the royals song, what a whiny sounding annoying song!

Great month! You just crack me up!