This might be a first ever--doing the month in review on the last day of the month.  It appears as though this will actually get published on time.  That's what a 4 day weekend will do for you.

I've been slacking on the spin bike a bit since the weather has gotten colder.  I haven't quite gotten to where I'm heading to the Y on a regular basis to get on the spin bike.  I should be much better with this in the next month.  A friend of mine is teaching a 5:30 a.m. class on Tuesdays that I'm really going to try to make it a routine to get to.  It's nice to get that out of the way for the day.

I love that the Y is open on Sundays again and also they have extended the lap swim during the day so that I don't have to hurry after work to get there.

They've asked me to be on a tennis team….. I'm not sure what I think about that.  I don't really love playing tennis when it counts.  I just don't have that competitive drive to win matches.  I play well, but just get in my head if I start playing poorly.  I'll let you know what happens with that.  I'm not even sure I'll have time to do it anyway.

Nothing major or even timed, but we did do a Turkey Trot on Thanksgiving.  Our local Y organized a Turkey Trot again this year.  It's untimed, no water stations, no medals or prizes.  Just show up, donate money to the local food pantry and run.  No frills, just fun.

I wanted to go this year dressed as a turkey and had been working on an outfit for the past couple of weeks.  My kids were mortified and refused to take a pic with me or even run with me.  Party poopers. I wanted them to dress as pilgrims and chase the turkey (me), but nope.  Maybe I'll bribe them next year. 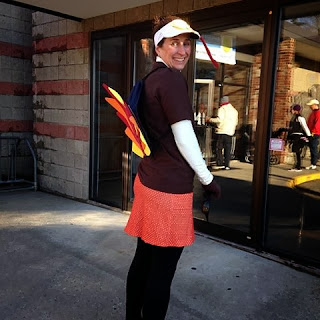 that's a pretty epic turkey if I do say so myself. note the wattle.  there's a beak on the visor that you can't see very well.

I have no idea how fast I ran it.  It was untimed, as I said.  I also was ahead of my daughter and turned around to find her and run with her a bit so I ran a little over the 5K.  Great fun.  Great day.  Great amount of money raised.  We raised over $2100 with around 160 people showing up on Thanksgiving morning.  Good stuff.


Am I too old to love Ke$ha?  Cause I pretty much love all her songs.  Although, technically, this one is Pitbull's song but Ke$ha makes it.

Other Notable Events in November

Root canal went just fine.  Really, a piece of cake.  In fact, it was much much easier than the original filling for the cavity in that tooth.  I just have to go back in a couple of weeks to have it finished.  Then the crown.  Then I will have no money in my health savings account.

Danielle and I are hosting a challenge on instagram called the #holidayselfiechallenge.  It's just a little thing to get you in the mood for the holidays.  Or to show how grinch-y you are.  Either way.  Just post a selfie on instagram doing some holiday something or other, tag me @ltlindian2 and Danielle @RTdanielle09 and use the hashtag #holidayselfiechallenge.  Now through 12/5.  Or longer if you want.  Whatever.  No prizes or anything.  Although I might come up with something for the picture that makes me laugh the most.

Posted by ltlindian at 5:59 PM

You know you are doing something right if you traumatize the kids. Love the costume!

I love the costume!

overall looks like a had a pretty good month!