The Many Ways This Tuesday Blows

Tuesday is the day my friend teaches spin class at 5:30 a.m. at the Y.  Last week I managed to get my ass in there for that class and it was great.  Nice to have the exercise done before most of the world is even awake and bonus that I didn't have to run in the freezing cold later that night.  So I had fully planned on getting up again today to make that same class.

I even called myself out as attending on Facebook.  (mistake #1) 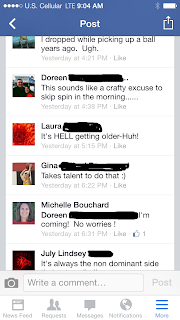 So I didn't bother to shower last night (since I would need a shower after spin class anyway), got my clothes all set out and put them in the hallway so I could find them at dark o'thirty and not wake everyone up in the process.  Then I went to bed at a reasonable hour.  Yay me.

Needless to say, I didn't go.

When I finally do get out of bed at 6:30 (cause now I have to shower since I didn't do it the night before...), I look out the window to see snow.  !!!!!  Seriously?  I'm positive that the meteorologist did not even mention snow for today.  LIARS.  IDIOTS. 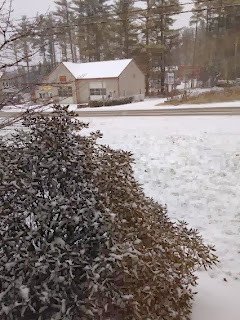 Mind you, my snow tires are not on yet because my car guy is in Florida until next week. asshole  So I have to wait until then and drive my van of death along with every other idiot who's not prepared for this snow.

Surprisingly, the drive was pretty uneventful for 80% of the way.  I slid a few times while trying to stop but never came close to hitting anyone until I was about a mile from work.  We were driving through town and the car in front of me puts on his blinker to turn left.  I am not tailgating so I have plenty of time to stop (so I think) but my shitty non-snow-tires think otherwise and I proceed to slide towards his stopped car.  I'm not going fast at all, but I'm positive I'm going to hit him so I turn my wheel to the right to try to hit the curb instead.  My car finally stops about 8 inches from his bumper.  Phew.  At which point, this ass decides that he really doesn't want to go left at all and starts going straight again.  ?@!!**?@%  What the what?

Oh and as an added bonus, I get to work late tonight. 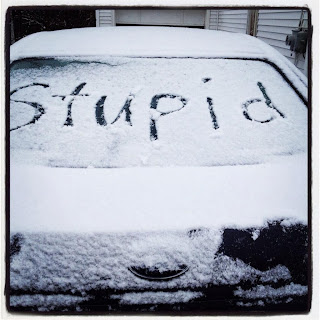 On a happy note, I was able to get registered for the Mid-Winter Classic 10 miler that sold out in about 4 hours yesterday.

Is your Tuesday going better than mine?

Posted by ltlindian at 6:36 AM

We just have rain instead of snow but I don't have to leave the house, so I'm winning over here :)

UGH my Tuesday was stupid too! Like, the stupidest. And then there was more stupid snow this morning, and even though by Maine standards it is a "dusting" it is causing everyone in the world to panic and drive like a damn fool... MEH.. Oh well, today is still bound to be better than yesterday because it is 30 out instead of 17 (it's the little things, right?)

I could complain all day, every day, ALL WINTER, about how much I hate snow. And drivers. And people. And work.

My day isn't the worst ever, but is less than half over so I'll just wait for things to implode later.

My tired sucked ass too….and the entire way to work, I just prayed I didn't get in an accident. The plus side is that my commute is only 3 miles…so if I did go off the road, I could just walk to work. Probably safer….. ;) At least you got into MWC!!!! I'll see you there!