that post in which I finally write a recap....

So I'm finally getting around to reviewing September and October's totals.  I am seriously the lamest blogger ever.  Some serious shit has been going down in the Average Girl's household that has kept my mind otherwise occupied.  Details will be forthcoming, but let's get through the basics first. Ugh.  Here goes.

Bike--195 minutes on the bike.  Biking on an actual outdoor bike gets so much harder this time of year when it starts getting dark earlier and earlier.  So most of this was on the spin bike.

That's it folks.  No swimming, no weight training, no tennis.  Nothing.

Races--I didn't have any races in September.

Weights--15 minutes (seriously, why even bother mentioning it?) and 1 hour of yoga.  Not including my yoga fails...

Races--I had one race in October.  It was a brand new race called the Trail Fest.  It was a race on trails (duh) in Kennebunk Maine.  A friend of mine was kind enough to give me a code for a free entry, so I thought, why not?  There was a 5K and a 10K and I chose to do the 10K.

It was an afternoon race, which was really weird, and it was a lot longer drive to get to the start than I thought it was going to, but once I got there it was a perfect day for running and the trails were beautiful. 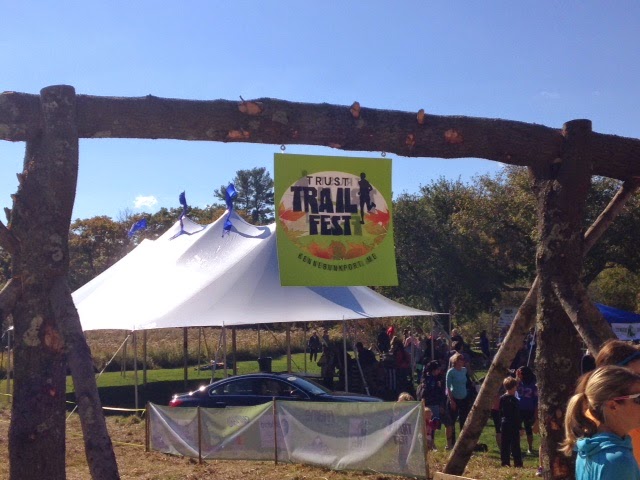 
I knew only one person there so that was weird in that I didn't really have anyone to hang out with at the start.  Princess came with me and she was such a good sport about just hanging out on the deck while I raced.  She even videoed me as I finished!


Books--still trudging through the Game of Thrones series.  I'm on the final book now.  I say trudging not because I'm not enjoying them but because they are long ass books!  It is taking me forever to finish this damn series!  I can't wait to finish so I can watch the show.

What's New--omg so much going on this fall.

~Big Sissy had a great freshman season in field hockey this year.  Not only did she start and play varsity, she was the team's high scorer with 10 goals and 7 assists.  She was also selected for our conference's all stars second team.

~Princess' field hockey team also did very well this year, ending up as runner's up for their league.  She got to play a bit (she's a 6th grader on a 6-8th grade team) and really improved quite a bit.

~Manimal finished out his first year of football also making it to the championship game for their league 3/4 grade.  He had quite a few touchdowns, an interception, long runs and some great blocks this year.  I am so incredibly proud of all my kids.  They are far better athletes at their ages than I ever was and most importantly, they all continue to make excellent grades as well.

~Eldest daughter has a boyfriend.  eek.  A senior boyfriend.  My freshman daughter.  This has occupied my mind many, many hours and has been very stressful for me.  I have recovered from the initial newness of it and I really like the kid/boy/man/whatever.  He's super nice, a hard worker and he treats her well.  It's too bad the first boyfriend wasn't a sophomore or a freshman, but oh well.  Go big or go home, right?  Did I mention this is the same daughter that is turning 15 this weekend?  How is that possible, I'm only 30.....  #old #ifeelsoold

Music--new music on my iphone lately:
~Leave the Night On
~Drink a Beer--not for running but I really like the song
~Fireball
~Animals
~Look at You

Lots of country because pop is bugging me lately.


What's on the Agenda

~Basketball is starting in the next two weeks for both Sissy and Manimal and that will take up almost every day of the week once it gets started.  I love and it and hate it all at once.

~I've signed up for the Santa Hustle Half Marathon on November 23.  I'm super excited to dress up like Santa and run 13.1 miles!  Who wouldn't be?

~I'm trying to figure out a day to go to the Celtics game in Boston, but with basketball practice and traveling to get there, there aren't many days available.  Looks like it's either going to be next Friday or Super Bowl Sunday.

That's all this time around I hope everyone is having a great fall!