I guess I didn't really think any of it being blog-worthy.
Or I'm lazy.
Or I think my life is boring and couldn't come up with anything clever to say.

But here I am again.

Even if it's not interesting or funny, I need to keep writing here because first of all, it keeps track of all my miles for me!  Secondly, I had no idea that I broke my 10K PR TWICE this summer.  Until I just looked at my lonely blog this morning, I didn't have a clue.  I've taken 2 minutes off the damn thing!

Anyway.  Back at it.  I need to review my entire summer but I'll first do this race and get back to that later this week.  Or month.  Whatever.

So yesterday was the Portland Trails to Ale 10K.  Our high school cross country coach (who is damn fast btw), wanted to get a team together from Boothbay for this race.  Top 3 finishing men and women's time combine and whichever team has the fastest time wins.  The men pretty much had it in the bag because we have some FAST men in our area and some pretty fast women too!  (I am not one of those, but somehow I was on the team anyway. :) Charity, I suppose.  haha)

No real training for this race other than the usual running with my best running buddy, Stacey.  Who, BTW, just had her Boston Registration accepted!  Yesssss!!

Race start time was 9:00 which was perfect so I didn't need to get up at the ass crack of dawn.  We left at 6:30 to drive to Portland and find parking, which we were able to find off street kinda near the start.  As I got out of the car, I noticed a cat outside, not on a leash, just hanging out in the middle of the city.  It was in front of a townhouse -sorta thing, but I was really surprised to see the cat just hanging out.  Wouldn't you think it would get run over?

I hoped he wasn't a stray but my daughter went over to him and he was the nicest, purring, loving cat ever.  He rubbed all over us and purred.  My daughter noticed he had a collar and checked it--Scooby. hahaha!  Love it. 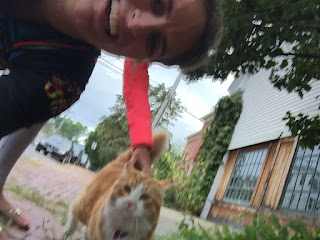 Cat selfies are hard to do when the cat keeps rubbing all over your phone....

I had followed my friends and teammates, Stacey and Sara, down to Portland and then ran into my other running friends, Danielle and Sarah before the start.  They were part of another team--but more of that later.

Danielle and Sarah went to go "warm-up" and run 2 miles, (I cannot see any point of that!  Run 2 miles before running another 6?  Silliness.) so we milled around the start area trying to find the rest of our team.  The guys were apparently out running and warming up too (again, more silliness). 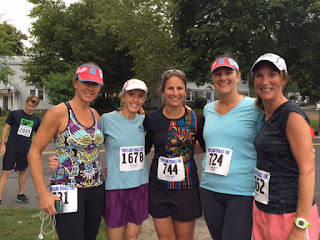 most of the girls

And then finally everyone was done with their foolishness and we got a most-of-the-team pre-race photo. 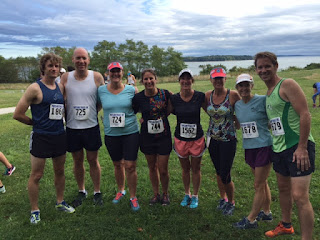 dudes on either end are FAST!

Peninsula Pounders.  Cause we're all from Boothbay.  Which is a peninsula.  And we pound the pavement.  Get it?  #soclever

Weather was coolish but a little humid and everyone was worried I'd be hot in a long sleeve, but I hate to be cold so I didn't change.  The course was down hill for the first mile or so and then very flat.  The "trail" part of the race was a gravel walking path around the bay in Portland.  To call it a trail is a stretch, so if you are looking for a true trail race, this is not it.

Stacey took off ahead of me and even though we usually run together at the same pace, she was off like a shot this time.  Makes me think she is running slower to run with me 90% of the time........  Anyway, that left me running alone with no Garmin.  I did have my stopwatch going but the miles weren't marked until Mile 3 so I had no idea of what my splits were.  I guess that's better for me.  Not knowing.  Just run on feel.

Pretty uneventful run.  I did feel like I was working hard for the first 4 miles.  There was a constant headwind.  Like seriously.  We'd turn a corner and there was headwind.  Around the next bend, headwind.  I thought it would never end.  It was like running with a rubber band that someone had attached to you from behind.

The last mile was super nasty as we run by the sewer treatment plant and I don't know if they were mixing up the shit or what, but holy hell, it was frickin stinky.  Just what you want to smell at Mile 5 of a 6 mile race.  Gag.  I passed a bunch of people anyway on that last stretch and for the finish I could see my friend and teammate, Brian, and he was cheering loudly when he saw me.  I sprinted that last bit and finished somewhere around 51:00. 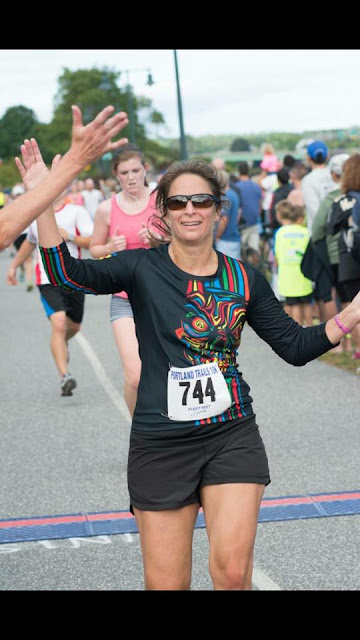 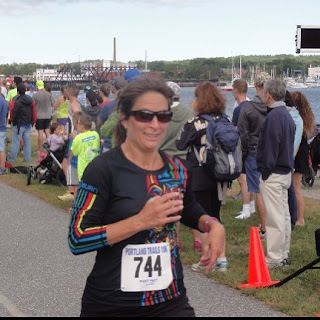 Apparently, I am the master at awkward finish photos.  Not just one, but TWO!  At least my outfit rocked.  And I actually look kinda muscley in that top one.

There was pizza and beer (hence the trails to ALES) at the end.  I had pizza but since I don't drink, I skipped the ale part.  I did hang around for the awards since the print out showed I came in 4th in my age group and our team did pretty well.  The cross country coach came in 2nd overall and 3 of our men were not far behind him.  I knew two of our women finished in under 50 so that's pretty good too.  I thought we would place for the team and I wondered if I might get third because the overall winner looked like she was about my age and that would pull her out of the age group awards.

We ended up with 3rd in the team division.  Turns out Danielle's team had a bunch of younger runners who were overall faster even though us old fogies won a bunch of age group awards.  Damn those young whipper snappers! 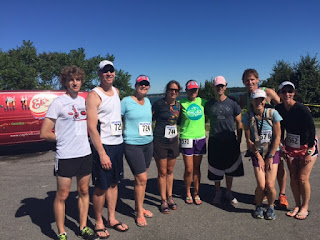 all the team minus 1 female


I didn't end up with 3rd  (BOO) so we left right after the awards.

But wait!  I looked up the results later on just to see what my actual finish time was.  Check this out: 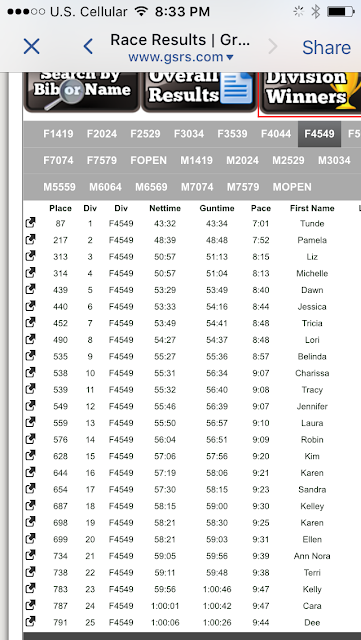 See me, number 4?  My time is the same exact time as #3, but I have a faster split and a faster gun time!  I should have been the 3rd place winner dammit!  Her name came up first, so they gave it to her.  I was robbed!  I want my damn bottle opener!  To open bottles of beer that I don't even drink!

My first big race that I actually won something, and I didn't.  Wah.

All in all Portland Trails to Ale was a fun race, great atmosphere and I had a good time with my local running friends.  Sign me up for next year!  Although I'll be checking the finishing times much more carefully.......


***Edited after posting the original blog post***
I wanted to update you all regarding my missed 3rd place award.  I wrote to the race director to inquire about the tied times and she agreed that we should have tied, then forwarded it on the the timing company to have them correct it.  She then forwarded me the explanation from the timing company as to why there wasn't a tie.  Here is his response (I paraphrased some):

"All events use net times to score their runners so that the person who runs the fastest from start line to finish line will receive the nod in close finishes.  As for the "tie", by USTAF rules, times should be rounded up to the next whole second so that the chance of a is remote and Liz had a net time that was actually about a full half second faster than Michelle.  So, she was properly listed as the third finisher in her age division."

So, wah.  I guess even though you can't tell by the posted times, it sounds like I didn't get third.

However, the race director is still happy to recognize the tied finish time and award me a medal.

I may or may not go get it since I feel a bit like a crybaby and that I'm getting a participation medal to shut me up.

It was a valid question though, wasn't it?