So apparently, I suck at post-op recovery.

I pride myself on being able to take care of myself.  I don't need help.  I don't really want help.  And apparently, that is not the way to recover from this surgery.

I went back on Tuesday (in a snowstorm, of course!) for a follow-up appointment with the plastic surgeon.  I was supposed to have the last set of tubes removed and be able to wear a regular sports bra.  Unfortunately, the fluid output was too high for him to remove the tubes.

He went through the exam and said that everything was healing nicely and I looked good.  But in order to reduce the fluid output, I have to do less.  He asked if I was doing housework and increasing my activity.  Of course, I was.  He said the fluid won't decrease output until I slow down and stop doing things I shouldn't be.

I don't sit down well.  I don't "do nothing" well.  It's almost impossible for me to sit and ignore the dishes, laundry, dirty floors, whatever needs to be done.  It makes me crazy.  But that's the way to get these tubes out.

He made an appointment for me to see one of his associates on Friday and if I behave, I will be able to get the tubes out.  So for three days I'm going to do NOTHING.  If my family wants to live in a shit hole, then I guess we will live in a shit hole.  If no one does the laundry, then I guess they will just have dirty clothes.  Dishes?  They can eat with plastic forks and paper plates.  I don't care.

My output of fluid has been down to less than 30 each day.  I have succeeded in not doing anything, nothing at all but watch tv and read.  It has been horrible and boring and shitty but these tubes need to be out.  There is laundry waiting to be folded.  There are some dishes on the counter.  But for the most part, the family has stepped up and done the work so I don't feel like I have to.

And I got the tubes out! 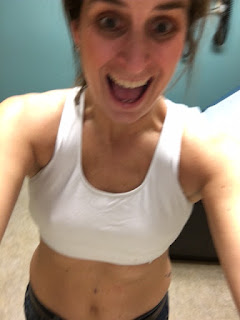 That's a regular sports bra and NO FUCKING TUBES!!

I got myself a little bit of a belly roll, but what do you want when you're sitting around for 2 weeks.  Still no exercising, no heavy lifting and only light housework.  ugh

Oh, and even funnier, I think my temporary boobs with just the expanders in, are bigger than my previous boobs.  I haven't even had a fill yet.  lmao

Did you know that you can sport small refridgerator magnets on the ports of your expanders?