1.  How fitting on my bloggy birthday that I would reach 10,000 views!  I thought it might happen that way, the numbers were looking right and then views dropped down earlier in the week and I thought I might not make it.  But thanks to Helicopter Parents and the Popcorn Giveaway I have zoomed right by that magic number!  Thank you so much to everyone who reads this blog!  I love to hear from all of you and I'm so excited when I look at my phone and see that someone has left a comment--no matter how short it is.  I love getting them all, so thank you for swinging by and taking the time to post.

Speaking of my bloggy birthday.....I did promise some kind of giveaway didn't I?  Well, I am still working on that.  I have some things collected and I'm trying to decide if I give them away one at a time or give them all to one winner.  What would you rather have?  A collection of stuff that one person wins, or a bunch of giveaways of little stuff that mulitple people win?  I'm leaning toward a bunch of stuff to one person but will change my mind if I have enough feedback from you.

2.  A while back I had purchased some new swim goggles to try out.  My old cheapos finally broke after my daughter got a hold of them.  Grrr.  They were old, so I won't blame her.  Much.  I bought a few pairs from swimoutlet.com to see if I could find the *perfect* pair.  Two pairs to try and one to giveaway.  First up  Vanquisher 2.0 by Speedo. 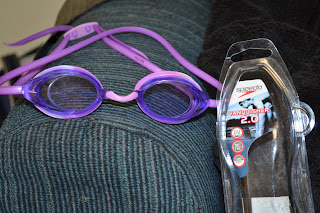 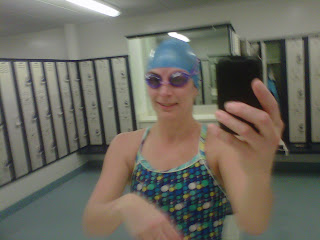 there will be no laughing allowed.  it takes guts to post a pic in a swim cap

They are a pretty purple color which matches nicely with my suit.  As you can see there are two small straps that go around your head.  My previous pair only had one thicker band so it was a little adjustment to get this one to fit properly.  These goggles fogged up after about 6 lengths, which is kinda annoying.  I had to stop and spit on the lenses and then it was fine after that.  They did leave some crazy goggle marks and it was a little sore under my eye when I had the tightness that I needed so that they wouldn't leak.  Cost $5.95  Grade = B-

The second pair I tried was the Women's Air Seal XR Mirrored by Speedo. 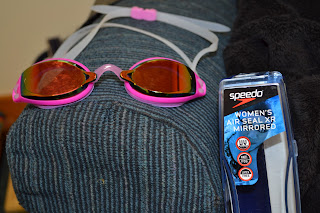 Pretty fancy with the orange mirror and the pink goggle huh?  These had the two straps too but were a little easier to fit to my head.  This pair also had a nice cushion around the eye piece that was way more comfortable after my 40 minute swim.  I had to make some minor adjustments but these didn't leak at all.   They did fog up after 6 lengths like the other pair.  Again, annoying. 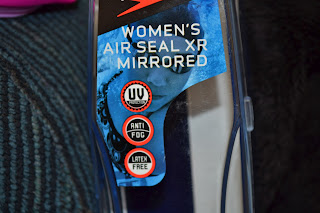 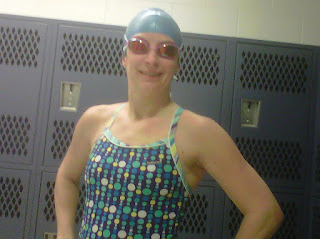 This pair felt way more comfortable than the previous pair and I don't feel like the raccoon eyes post-swim were quite as bad with this pair as compared to any other pair I've used.  Cost $19.95  Grade= A-

*side note--the suit is a $9.95 special from the grab bag at swimoutlet.com as well.  My favorite so far.

3.  A FB friend of mine posted this on her wall earlier in the week and I find it crazy addicting to watch.  It's a webcam pointing at an eagle's nest and the mother had just laid her second egg!  So awesome. 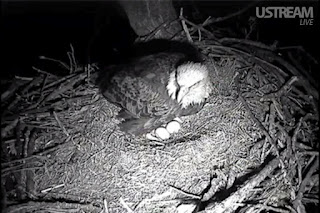 You can go to this link to see them live or google Decorah Eagles.  It is pretty cool.  I watched most of the day Tuesday and it was so windy, I was getting seasick from watching the nest sway back and forth with each gust of wind.  I don't know how it didn't blow right off.  I guess they know what they are doing when they make the nest, right?

Have a great Thursday everyone!

Posted by ltlindian at 8:35 AM

Congrats on your bloggy birthday!

I have a great new pair of goggles that I just started using. I love them. They are Aquasphere Kayenne. They work incredibly well. They are a larger lens and I have virtually no fogging or leakage.

Thanks for sharing your blog. I enjoy reading it!

Happy Bloggy Birthday!!! & congrats on the 10,000 visits. Sweet! Love that eagle video. Now if you run on the RT with us, you'll see an eagle perched up high in the trees.

Here's another comment for you! Happy bloggy birthday! Eagles are so incredible. Oh, and as much as I would love more chances to win something, it might save you a lot of hassle and postage to just group a bunch of stuff together. Or just make sure someone local wins...*wink wink* I'll try to get over there tomorrow with your stuff.

Happy bloggy birthday and congrats on 10k views! Color me clueless on goggles but score on the swimsuit!
That webcam is too cool.

wooooo hooooo party time!! Love it when it's time to celebrate!

Grab bags can be such a score:)