This weekend Big Sissy had her final basketball game as an 8th grader.  Their team was undefeated this year and had the championship game Saturday.  My daughter is the point guard and I have never seen her handle the ball as well as she did that game.  They were playing a 1:3:1 press to trap the girls in the back court and our team was floundering a little to get through it.  But the she started using her dribbling skills to break the press and it was so fun to watch.  Our center had a fantastic game scoring most of our points and was deadly from the foul line.  My kiddo had 2 3-pointers and many times she drove in with some great moves for a lay-up but had the wrong angle and just missed, most of the time our center was there to get the rebound and put it back.  If she can finish on her drives, she will definitely be someone to watch.

What a great way to end their middle school career.  Over two seasons, they are 31-1.  Proud momma moment. 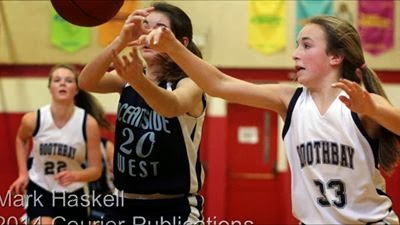 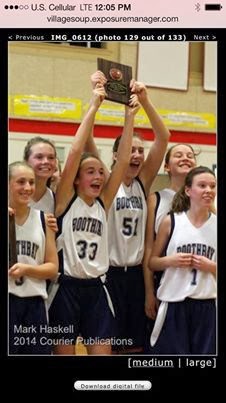 Ultra runner and founder and director of the Mount Desert Island Marathon, Gary Allen, is running from the top of Cadillac Mountain here in Maine to the Super Bowl in New Jersey.  He is running 50 miles a day for 10 days to raise money for the Wounded Warrior Project.  He is pretty awesome and quite the legend here in Maine.  On Saturday, I was able to see him and his crew, including my internet pal Sarah, as they ran along Route 1.  We passed them twice as I was on my way to the basketball game and then again as we were heading home.

I was so hoping that I might be able to run some miles with them on Sunday as they passed by my town, but I had no idea how I would get back to my car or what do to with my kids.  I had to bring #33 above to her field hockey practice so I thought, if he didn't run too fast, I might catch them on the way.  Which I did!  I was so thrilled to be able to catch them while he was taking a water break and have a minute to talk with him.  And of course take a photo! 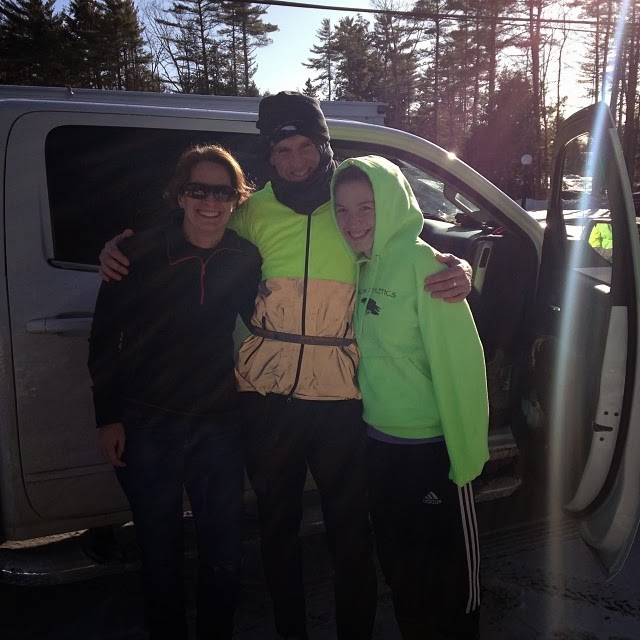 even though it looks nice out, it was freezing! and windy.  probably around 14*

Unfortunately, he has not had the best weather thus far.  It's been bitter cold, and yesterday when it warmed up, it was sleeting/snowing/raining for pretty much his whole leg.

If you haven't heard about Gary or the Wounded Warrior Project, please take a minute to click  HERE and check it out.  It's an amazing charity and definitely worth donating to.

As we approach this time in life called "middle aged", it seems more and more friends and family alike are filing for divorce.  It upsets me even though it really has nothing to do with me.  I'm not making any judgments or anything but I just feel very sad inside when marriages of 10, 12 even 20 years are breaking up.

I have no words other than that.

So, I'm watching the Grammy's last night and chatting on Facebook when one of my friends posts a link about the show Alaska: The Last Frontier.  This show we have been watching for 2 years anyway and basically it's about this family that lives totally off the grid.  They grow their own food, shoot their meat, no electricity, no indoor plumbing etc.  Basically, about how much work they need to do to just exist.  It's a pretty cool show.  Anyway, the people on the show are Jewel's (the singer) family.  The head guy is her father and the men are her brothers or cousins.  I knew she grew up in the wilderness of Alaska but had no idea that this was about her family.  HERE is the link if you are interested.  It's worth watching.  Both the show and the link.

How was your weekend?  Happy or sad?