Tri for a Cure Race Report

A few months ago a friend was looking for a person to do the bike portion of a tri relay that she was signed up for.  The biker they had couldn't participate this year and so she needed a fill in.  The race was the Tri for a Cure, which is a hugely popular race here in Maine.  It fills within minutes and many use a lottery system to get a spot.  Oh, and it's all women!  Fun!  Not to mention it raises money for cancer research and treatment for people right here in Maine.  A good cause indeed.

I had toyed with the idea of doing this race for a few years, but had never tried to get in.  So when I saw Kristal looking for a biker, I offered right away!  I think I got the best part of the tri for sure!

Like any other fundraising race, this one had a $350 fundraising minimum for all participants.  I got a late start since I was a fill-in, but did manage to meet and exceed the fundraising requirement.  Thank you, thank you to all that donated.  I really appreciate your generosity.

The weekend of this race was a particularly crazy one for my family--I had one kid at lacrosse camp and another at field hockey camp and neither were near each other.  I was driving all over the state to get everyone everywhere.

Saturday was packet pick up and bike racking day.  I was fine with that because even though it was 90 minutes away from my house, it was close to where one of my kids needed to be that morning.  I went right at 10:00 when it opened thinking I would be in and out. 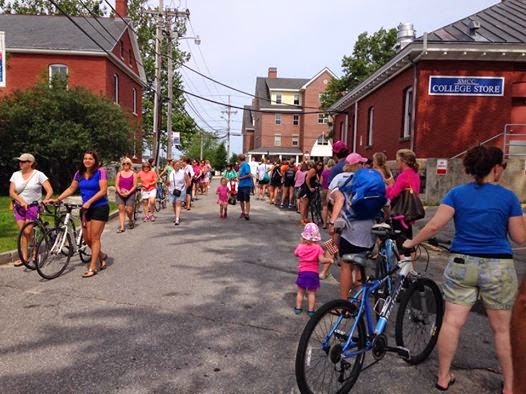 I guess everyone had the same idea.  After about an hour's wait, I got my shirt and stickers for my bike.  Then I had to walk to a different location to rack my bike.  ugh. 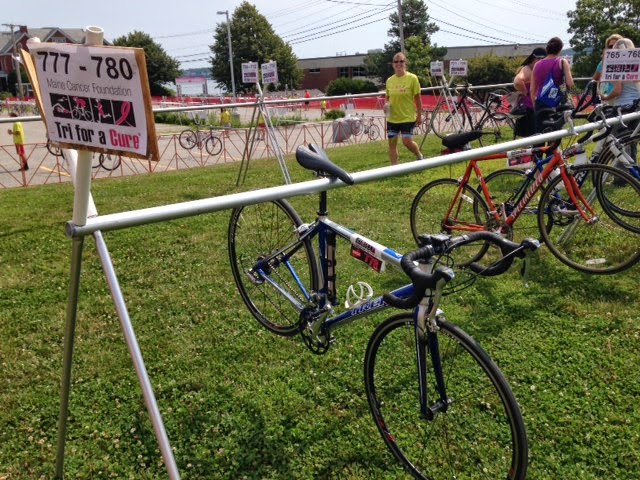 bike is ready to go

The next morning was a pretty darn early start for me.  Again, I live about 90 minutes from where the race was being held and it was starting early due to the tides, so I was up and out at 4:30.  That's AM folks.  4:30 a.m.  I never see this time of day unless it's to pee.

Through the magic of cell phones and texting our team was able to find each other in record time.  Thank god.  One stress over with.  I finally got to meet Candace, the lovely and brave girl doing the swim portion. I was so, so thankful that it was not me swimming.  Swimming in the ocean is my least favorite part of the tri and that morning it was cool, foggy and the water was COLD.  I hate being cold.  Especially cold and wet. 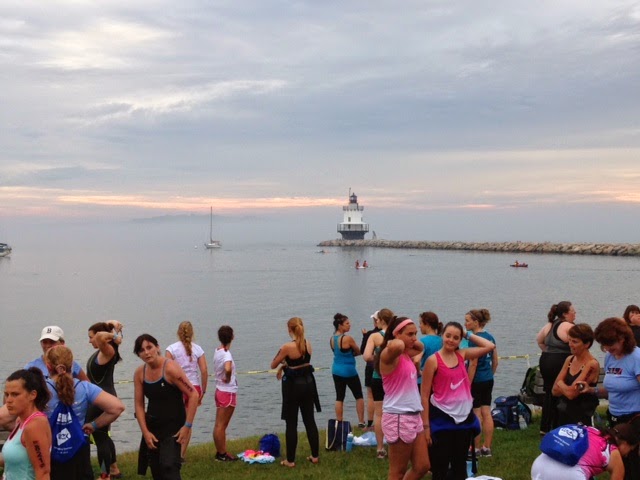 There was a fair amount of standing around and waiting as per usual at tris.  Once we got kicked out of transition, we went down to the water to wait for the opening ceremonies.  They do a little bit more than just the National Anthem (which was sung very well--good job Emily Kane) at this tri.  They take some time to honor the cancer survivors that are participating in the tri, which is kinda cool and very emotional for some, and to also remember those that have been lost to cancer.

The survivors are the ones who get to start the race.  The first wave is survivors, second wave survivors that are part of a relay team, then they go by age groups with relay then novices at the end.  It was very emotional to see all those survivors run into the water to start their swim. 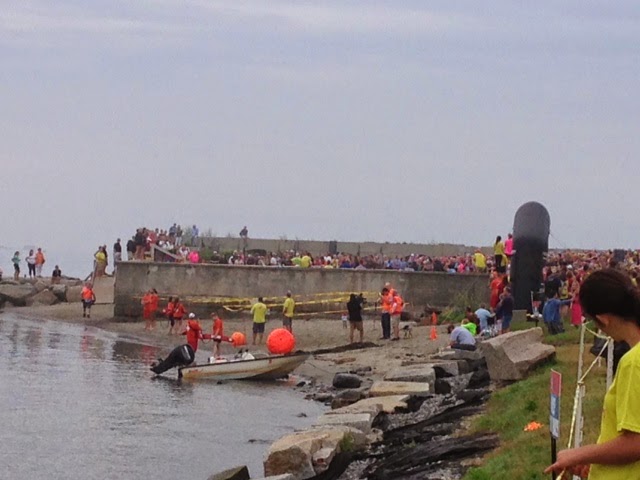 Candace was in the second to last group to go because we were a relay team.  Poor girl.  She went for her "warm-up" swim and came back frozen.  The water was 53* that day and even with a full wet suit, she said the water was "ice cream headache inducing cold".  I was, again, so thankful I wasn't swimming. 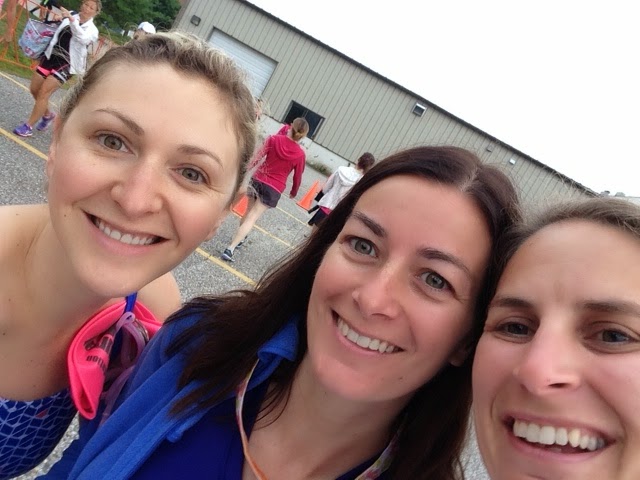 before her "warm up swim", she's still a normal body temperature here

I left shortly after the survivors got in the water.  I was not doing the running from swim to transition because I use bike shoes so I needed to wait by my bike to swap off the timing chip.  Kristal sent me a text when Candace got in the water and I knew it was going to be about 9-10 minutes from then so I got myself ready to go.

It wasn't too long and I saw Kristal racing up from the swim area, we were one of the first relay teams to head out on the bike!  A quick switch of the timing chip and I was off.  I had some issues getting one of my bike shoes to clip in, but once I did, I took off!

I had told the girls that I thought I could average 18 mph and I wasn't going to let my fast swimmer and fast runner down.  I biked my ass off.  I didn't need to save any energy for the run, so why not hammer the bike?  This tri is a group of all abilities and sizes.  I passed so many people to start, many were on just regular bikes.  I played cat and mouse with a few women who appeared to be serious tri-folks.  You know, tri bikes with aero bars.  I'd pass them on the hills, they would pass me on the flats.  Eventually, that group of 3 women just were too far ahead and I couldn't catch them.  There was one woman riding a fat tire mountain bike that I seriously, biked my ass off to catch up to her.  I eventually passed her and told her she was killing it on the mountain bike--I can't imagine her speed with a road bike and some skinny tires!  I biked as hard as I could and I really don't think I could have biked that route faster than I did.

Soon enough, I could tell I was just about done.  People were lining the road and cheering.  Kristal was waiting for me right at the bike rack and before I knew it, she had the timing chip and was taking off!  I looked around and I was one of the few bikers that was back in the relay group.  Jenn snapped this pic of me while she was waiting for her runner. 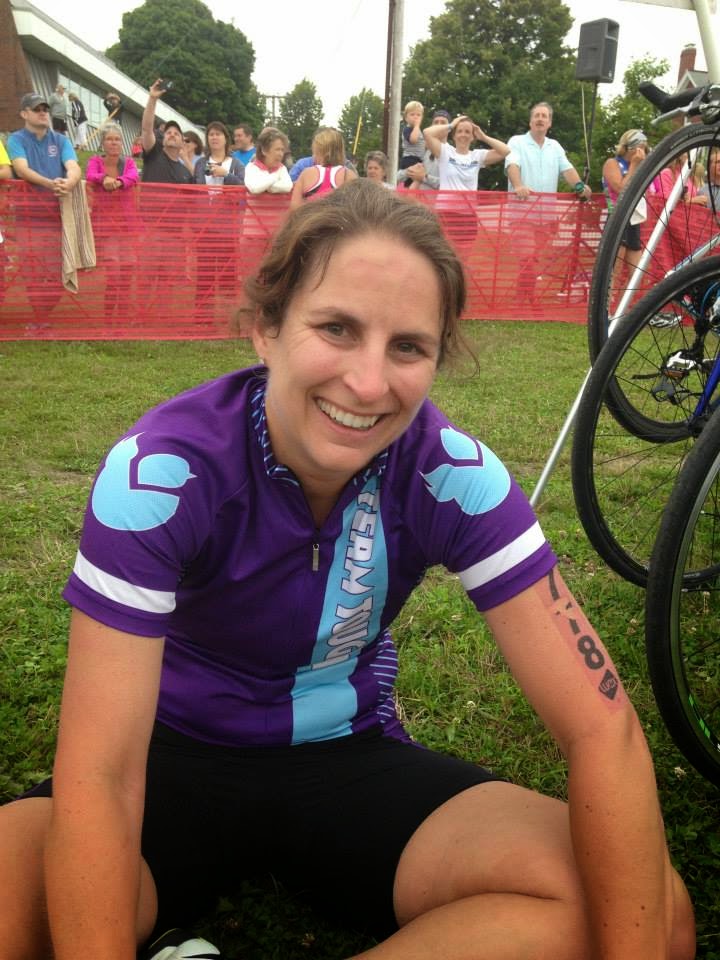 hot and tired. and poor posture

I got a drink, changed into sneakers and then made my way down to the finish line.  There was a place where relay racers could meet up and run through the chute with the runner and I totally wanted to do that.  I found Candace and we went down to the chute to wait.

Kristal was looking for a PR on this 5K course so I knew she should be coming right along.  We waited about 10 minutes and there she was!  Candace and I ran in with her and we all held hands.

For about 3 seconds.  Kristal was running about 7:00 miles and she was not slowing down or stopping for anyone.  Including us.

We kept up with her for about 20 yards then another woman was in our way and I had to let go of her hand.  This is the finishers photo: 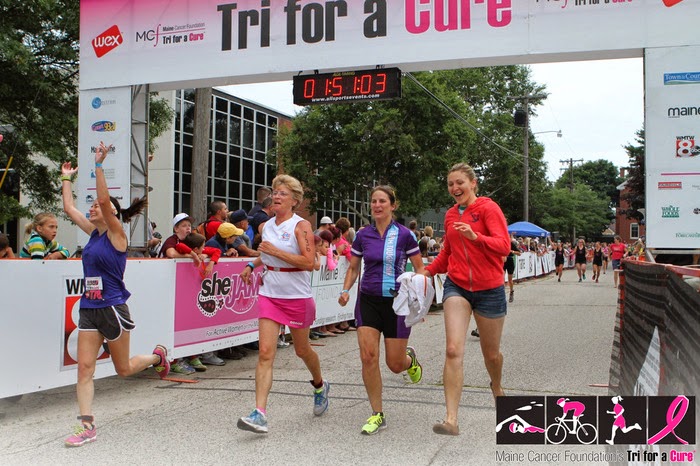 Kristal winning it all on the left and Candace and I barely keeping up on the right.  Random woman next to me.  I have seriously, never laughed so hard as I did when I saw this picture.  Notice the other relay team coming in behind us all holding hands and running together.  I'm guessing they weren't going for a PR......

We got medals and water bottles and then promptly went to the scoreboard to see where we finished.  Sixth!!   We finished 6th out of 200+ relay teams.  Not good enough for a prize, but close! 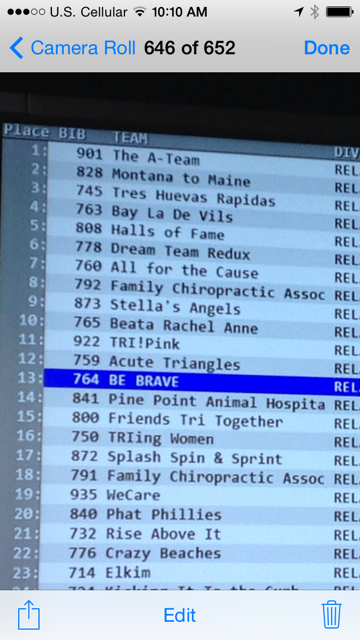 We did end up getting a proper finish photo, thanks to Candace's significant other. 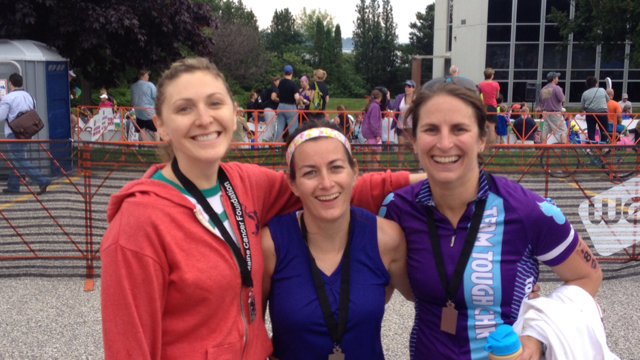 Thanks for letting us be in this one, Kristal!  haha j/k

What a fun morning!  Thank you so much to my teammates for letting me in on this team!  I had a really great time.  The race is very inspiring and has such a good feeling about it.  Women of all sizes and abilities coming together for a common cause.  Everyone so supportive of each other--it was a good day.  I hope they'll let me join them again next year.

Oh, one last photo to share.  When the official photos came out I could not stop laughing at the finisher's photo of our team.  But there was more.  Maybe we could have finished 4th if Kristal was concentrating on running fast rather than hamming it up for the cameras..... 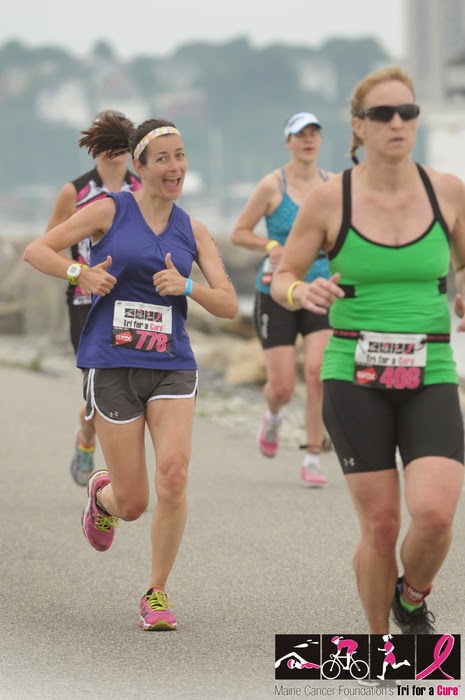 I'm sorry, but is that not the freakin' funniest thing?