Dear Tough Mountain Challenge--you certainly lived up to your name!  Holy crap!  That was one hard race.  I'll get on with the race recap shortly but first we need to review the events leading up to the race.

Friday--took the day off.  Thank frickin' God.  95 frickin' degrees out.  Felt like a pressure cooker out.
The. Hottest. I. Have. Ever. Felt. In. Maine.  Really.
Kids last day of gymnastics/arts & crafts camp.  Mile swim in the most heavenly cool water pool.  Lunch out with kids.  Dentist with kids.  Then home.

Ok.  So the Tough Mountain Challenge is at Sunday River Ski Resort which is about 2.5 hours away from our house.  I had been looking for places to stay up there Friday night so that we would not have to drive in the morning.  I was not having any luck.  Either everything was full, or $300 or didn't have A/C.  (There was no way I was sleeping without a/c that night.  No WAY!)  So we figured we'd drive 1/2 way to Lewiston and find a hotel there.

We finally get motivated and pack up and head out.  We arrive in the Lewiston area around 7ish and drive up to the Hilton where a friend had mentioned it was $130/night.  I walk in to pay for a room and they say they have one left for $350!  I asked why it was so high and she said that everywhere was sold out because it was Camper's Weekend.  All the sleep away camps in the area have a parent's weekend where all the families come to visit.  Excellent.  We called about 10 places listed on our GPS and only 1 even had a room available.  Of course, it's the roach motel.  (not really called that, but close enough)  The only redeeming quality is that it is directly behind my favorite Mexican restaurant.  Bring me a pitcher of margaritas STAT!  The night wasn't too bad except my husband said he had an ant or two crawling on him...ick.

We head out to Sunday River with about an hour left to get there.  I had called every person on Sunday River's babysitter list looking for someone to stand with our kids while we run the race.  No luck.  We went anyway hoping for a miracle sitter or we were just gonna let the kids stand alone.  The oldest is almost 12 so it's not that bad.

We arrive with a couple of hours to spare before our race time which was scheduled for 12:40.  I find my friend from high school, Kerry, who works at Sunday River and chat with her!  It was so nice to see her.  We get our packets which contained a t-shirt, mug, beer ticket and race number.  We were a team so only one of us wore the number and we both had to cross the finish at the same time.  Another friend of mine from high school, Todd, was running when we arrived and we were able to meet up with him after he finished.  He offered to stand with the kids for us while we ran, so that was a huge relief!  (Kerry offered too, but she was working so it worked out better with Todd.)

Here we are pre-race: 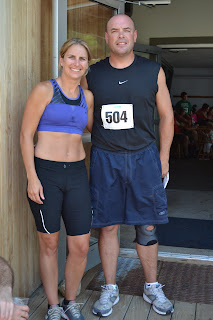 I opted for the no-shirt just bra top cause it was so damn hot out!  I figured I might sweat a little less....  B knew he was going to sweat a lot and Todd advised him to keep his shirt on so he did and wore the number for us.  B hasn't run a lot and this was only his second race (the first was the Warrior Dash) so we knew we were in for a challenge.

My daughter, the photographer, caught every moment.  Here's the start. 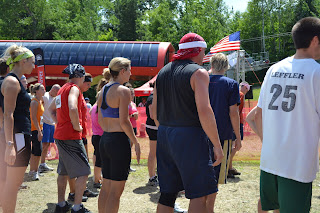 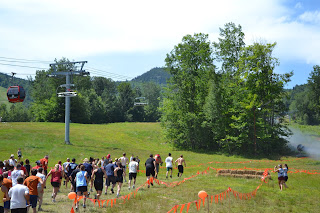 If you look carefully, the third from the front, a man is carrying his wife up this mountain!  They were the wife-carrying champions 2 years ago and just got back from Finland competing in the Nationals!  They were training/showing off.  lol  He only made it up the first hill, then they ran regular. 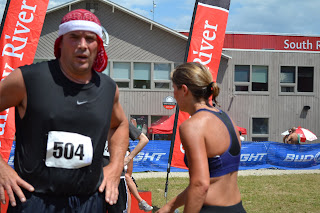 This course was definately much more diffcult than the Warrior Dash.  Not even close.  We had at least 4 times where we had to run straight up the ski slope and not just a little ways either!  The trail running was uphill half of the way.  The obstacles were a relief from the hill climbing.  B was just about done in the first half mile.  He really thought he was going to have to stop.  It was so hot for him and he had to take a lot of breaks and rest.  But he didn't quit, yay! and we kept going.  We had to climb over the snowboard obstacles, crawl through culverts, trail run uphill, rope climb over walls, rope climb up a ravine and slide down a slip and slide.  We finished in 54:08.  32 out of 70 duos.  Not bad considering how much walking we did.  The snow guns blowing water were such a help.  It was hard to see through them but the cooling effect was awesome!

There was a kids run too which was the cutest thing.  I wish it was a little longer though.  It wasn't long enough to weed out the bottleneck effect from the start line.  Kids who didn't start in front had a hard time making it to the front even if they were faster.  Oh well.  Here's a few pics from that.  Manimal: 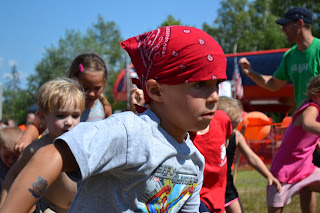 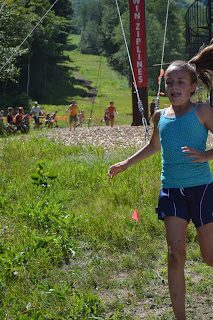 Princess didn't do it cause she was being a princess but that didn't stop her from going down the 'slip and slide' obstacle covered with vegetable oil at least 10 times when the adult racers were mostly done.

All in all a great day and a great race!  We will most likely be back next year to do it again.  I hope everyone else had as fun as weekend as we did!

Loved this comment: Princess didn't do it cause she was being a princess. :)