No, not exactly what you think.  Not the trifecta of bowel movements, but the trifecta of shitty food.  This weekend was a mecca of crap eating.  (Which you would think would turn into a trifeta of actual shit.  But not so.  Not with my weird bowel anyway.)  I have ruined about every good workout I did last week and probably this week (!), by the amount and quality of the food I ate this weekend.

It started out really good on Friday.  I got my 10 mile run in after work!  I only work until noon on Fridays, so I was planning to get my long run in before the kids got out of school.  I didn't have to rush as the hubs was around to see them off the bus, but I was still didn't want to take forever.

I was ready.  I ate dinner the night before and had a good breakfast/lunch.  I was hydrated.  I had water for my run in the car and also some gummy energy chews.  There would be no bonking today.  I ran 6 easily, came back to the car, drank water, chewed three gummies and back out.  The next two were pretty good and the last two sucked.  I went from a 9:00/mile average to 10:00 and the last was 10:45.  ugh.  But I did it!  I finished.  Total time 1:42.  I think I might be able to run the half mary around 2 hours--maybe under??  We'll see.  I'll try the 10 again next week.

So, that night began my crap food festival.  We went to the high school home football game.  Which is where my family I ate dinner.  We ordered food for the family (2 cheeseburgers, chili and french fries), but no one ate much of anything.  Sissy ate 1/2 a cheeseburger, Princess wanted GRILLED CHEESE.  NOT A CHEESEBURGER.  Stupid mom.  Manimal just ran up and down the hill catching a football.  So who ate the food?  Obviously, I did.  I hate to throw out food and I was hungry from my 10 mile run, so I ate it.  Not the fries though.  Princess does like french fries.  Those were acceptable to her.

The next day we had an all day shopping adventure which meant eating out again.  Restaurant (if you can call it that...) of choice was KFC/Taco Bell.  Side note:  Isn't it great that you can go to one spot and get fried, grease laden chicken AND fake taco meat tacos or burritos??  America is great.  Anyhoo, I enjoyed a snack bowl.  Which is basically fried chicken nuggets, mashed potatoes, gravy and corn.  Can you ask for a more nutritious meal?  Shame on me.

On to the evening and my finale.  We went to the local fair.  Need I say more?  Can you guess what deep fried pleasure I had there? 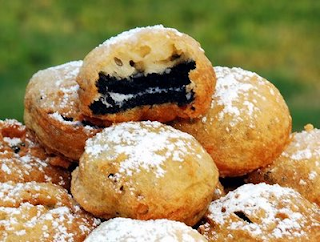 Oh, yes.  Deep fried oreos.  They had a deep fried whoopie pie too, but I managed to resist.  (Next year...)  For the record, these are un-freakin'-believable!  No joke.  They are one of the yummiest things I have eaten.  I was fully expecting to turn my nose up at them and think they were gross and greasy.  Boy, was I wrong.  Totally yummy.  And worth every disgusting calorie.

Have you ruined a good workout by crappy food?
What's the nastiest, most un-healthy thing you ate this weekend?
Have you tried deep fried oreos or whoopie pies?﻿
Posted by ltlindian at 6:27 PM

My weekend was just as awful, 3 days of crap eating. I too treated myself to Fried Oreos at a local fair. There were fried oreos covered in powdered sugar, fried nutter butters, and fried vanilla cream oreos covered in maple cream. What was I supposed to do, not eat them?

Also shared ice cream, french fries and maple coffee that same night...this was all after dinner which was preceded with cupcakes and sweet potato fries..........

Oh, my, very interesting reading! I have not tried fried oreos although when I arrived here Bruce was adament that I try fried pickles. It took at least 7 months to get me to try them. They were good, but I do not think I have eaten many since then. Fried foods just do not make me feel real great afterward:( I ended up eating Nutella cupcakes this week-end with extra Nutella added onto it. Stopped by not adding the vanilla ice cream:) Did also have Nachos Sunday afternoon. Time to get back on track I guess:)))

I've heard of these deep fried confections but never laid eyes on them. Does the Oreo get soft? Is it like funnel cake dough?
I'm sure I've ruined fantastic workouts with craptastic food, just must have blocked out the specifics.
I was ok this weekend. Other than a vanilla DQ cone, pretty clean.

Thanks for your comment on my fastinista post! I think if I looked like the cover model I'd be happy to flaunt pepto arm warmers too...or maybe not.....That's so funny about your husband. My husband literally flinched when I showed him that cover.

Wow, that food....I'm trying to eat clean ahead of my marathon in less than 2 weeks....now I'm craving Oreos...must put them on my post-race indulgence list...along with ice cream and massage....

And btw, I have never tried deep fried oreos and don't know as I should.....you know what your Nutella and pretzels recommendation did to me....