This weekend was a bit of a crazy one with double duty games on Saturday.  We had to drive Friday night 2 hours south to Massachusetts to get near where Sissy and Princess were playing a field hockey tournament the next morning.

This tourney was Princess' last tourney and she was about done.  She didn't really want to play goalie anymore even though she is the best one they have.  She agreed to play the first game as goalie and the other two games she could play as a field player.  The first game didn't go so well.  Our team is a U12 team and most of the girls are 9.  We played a more skilled team with mostly 11 and 12 year old girls and, of course, we lost.

She had quite a few saves with most of the goals coming off a good save and they had a player there to hit the rebound right in.  As she came off the field, she had tears in her eyes (which isn't unusual cause she tends to be very dramatic), so I thought she was sad about losing.

But what she said to me almost had me in tears myself.  I went to help her take off her helmet and she said that a girl on the other team told her that she sucked at goalie.  Those exact words.

I swear to god, the mother bear in me came out and if I knew which kid it was I probably would have throat punched her.

What compels a child, under age 12, to say that to another girl?  None of my kids would ever dream of saying such a thing.  How mean can you possibly be?  There wasn't a trophy, medals or anything for the winners.  It was just a round robin.  The games didn't matter at all, other than just to have fun and learn.

Of all the kids to say that to, Princess is the one it would hurt the most.  My other two kids would have been mad, but would either have ignored them, or played harder.  Princess is easily hurt by comments and she didn't want to play anymore.

Thankfully, coach was awesome and spoke to the other coach and to her credit, she came right over and apologized to Princess and told her what a great job she did and that she was going to speak to her team about what had happened.

All in all, the adults handled it well, but I was so sad it happened in the first place. 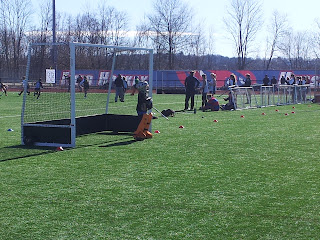 isn't she cute?  how could you say something mean to her?  really?

Big Sissy's team did great and went 4-0.  She even had two goals!  So proud of both of them.  It was a fun day other than the mean comment at the beginning.  I wish we didn't have to drive so far away to participate. 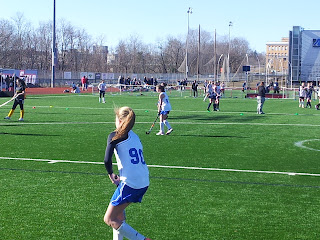 It was a beautiful day, sunny and 50's.  I was surprised to find that we were playing outside because all our other tournaments have been inside.  We had no outdoor gear so thankfully, it was not very cold. 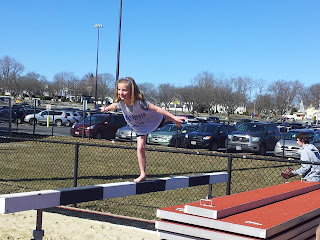 Princess messing around on some track equipment


After the games, we had time to swing back to my in-laws house and grab the dog and head back to Maine 3 hours away for Sissy's basketball games out in East Middle of Nowhere.  Not a joke.  It was totally in the middle of nowhere.

We finally arrived home at 10:30 p.m. and the Easter Bunny still had to come.  Holy hell.  The things we do for our kids, right?

The icing on the cake was a smashed screen on my computer when I opened it up today.  Fabulous. 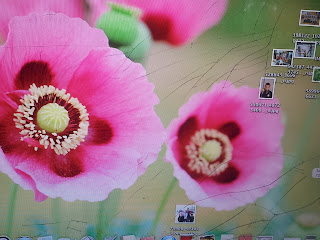 Any ideas on how to fix this?  I found a replacement screen on ebay which I ordered in hopes that my computer guy or I can replace it.

I can't have anything nice.

Have you dealt with any mean girls in sports yet?

I don't remember anyone trash talking me at any age in any sport I ever played.  Either I didn't hear or I wasn't good enough for them to speak to.  Or maybe kids are more mean now?


Have you ever smashed your screen on your incredibly expensive laptop?  Did you cry for days?

ummm... I had a coach from another team, a grown man, tell my son who was 12 at the time that he wasn't a good pitcher and that the kids on his team were having a bad day, thus making him look way better than he truly was... those exact words. A GROWN MAN! so perhaps the girl learned it from the adults in her life.

That sucks but it sounds like the adults handled it VERY well! I'm impressed by that because more than half the time the adults are the problem!

Mean people suck.
Sorry about your laptop, if it makes you feel better I put my iPod through the washing machine Saturday. I am drying it out still and crossing my fingers it will still work.

Kids are mean but often adults are even meaner. Sad but thats how it is. Personally I just smile and carry on.