So after we had gotten back from vacation, I came to the realization that it was indeed, time for a new car.  My Odyssey had served us well for 8 years and 210K miles but now that the automatic door wouldn't shut and sometimes opened while driving, it was time to trade it in.  Not to mention that I still had studded tires on it and would need to purchase 4 new summer tires in order to keep this car.

Studs for you non-Maine folks are little metal well, studs, put into your tires to give you more traction in the snow and ice.  Noisy as hell and not cheap.

Like any good American these days, I jumped on the internet to find myself a car.  Cause who the hell has time to go to a dealer and look at cars and actually SPEAK to a person?  Not me.

an oldie but a goodie

I called the sales department of the dealership when I found a car that interested me.  2008 Honda Odyssey with 54K miles.  Same car as mine already but way less ghetto for 20K and some.  Oh, and a DVD player. I thought the price was fair and didn't make a big deal about dickering at that time.  I mentioned my car and knew it was worth about $4k in fair condition.

I'm not exactly sure what fair condition means, but with a door that sometimes opens while driving, a broken tail light cover and a dent in the back, I was pretty sure we were close to it.  After an hour or so, the sales guy called me back and said with my trade the price was $17K blah blah.  So in my head I heard, we are giving you $4K on your trade.  I tend to not be very accurate with math in my head or pay close attention to silly details.  Remember this, it's important later.

So we agree and begin to proceed with the purchase.  We go through financing and I get a decent rate with a bank they use so the finance guy calls me to go through the fine details.  On the phone.  On my way to my daughter's dance.  Total time since original call: 5 hours.

He tries to sell me all kinds of warranty crap:  tires, windshield, extended car warranty, leather and carpet warranty--what a load of shit.  I decline all of it like the true cheap ass I am.  He then goes over the exact cost of things and it's then that I realize that I only got $3k for my car.  Of course, like a lemming, I say nothing and just let him do his thing.  My payment is a little higher than I thought due to all the tax, title, doc fee etc that gets added into the total cost and the fact that I'm getting less for my car than I thought.  I'm a wee bit uncomfortable but, buying this car still doesn't feel very real because I'm not actually there!  I mean, I can back out anytime because I haven't signed a damn thing.  I'll just talk to the sales guy in the morning.

Delivery is planned the next day.  They have a driver bring the car to you and all the paperwork so you don't even have to show your face at the dealership.  Not once.  I took pictures of my license and insurance cards and texted them to the salesman.  (said no one 20 years ago)  And then it's pretty much a done deal.

I stew a little bit about the thousand dollars, wondering if it's really worth it to make a big deal about it, trying to decide whether to call the sales guy and squawk about the price and try to get it down a bit.  And then my door opens while driving.  Hmmm, maybe 3K is just fine for this car.  If they actually SEE the car, they may decide that it's not even worth the 3K.  I really should have taken pictures of the old car just so you could appreciate how ghetto it really is. 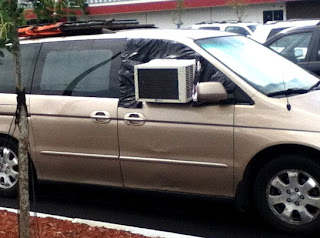 very similar to this one really--same color and same make...dents look similar.  my a/c worked though

So anyway, the delivery guy arrives at my house, with my newish car, we sign papers and he takes my ghetto van back to the dealer.  All done in about an hour or so.  Removing all the crap from the ghetto van took a little more time than planned.   One little glitch in the paperwork which we quickly fixed by threatening to send the car back and I had a new car!  woo! 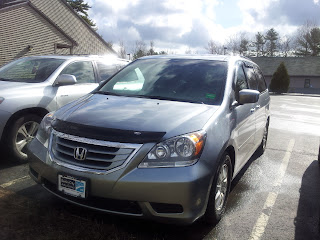 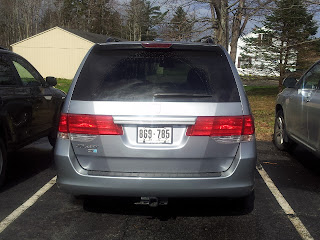 so pretty! so clean! so quiet!

I never realized how loud and rattle-y my old car was until I got to drive this new one.  Total time spent on buying a car: 3 hours out of 2 days.  Unheard of.

The first thing my son said was "mom, now you need a new Tough Chik sticker"!   I was sad to see it go.  Shannon, can you help me out?

Never ever thought I could buy a car without losing an entire day at the dealership.  Isn't technology fabulous?


Have you ever bought a car online or without even seeing it in person?


What is your dream car?

Posted by ltlindian at 8:24 AM

I think I would have had a heart attack buying a car without even driving the thing. It could have been missing brakes or something! lol

Nice! We've shopped for cars online before, but never bought them that way. I would like a Mazda CX-7 in white with leather interior, but I'm pretty happy with the Mazda5 I have now...sliding doors and car seats are the best!

Carrie I have a Mazda CX-7 that I love (silver, black leather interior)!! I upgraded from a Mazda 3. Now I want a Mazda CX-9
:)