Running with Fish and Shits

This past weekend in Boothbay Harbor was Fisherman's Festival.  It's a weekend of crazy fun put on by the locals for the locals.  My daughter had signed up for the cod fish relay race.  Basically, 4 kids from each grade 5-8 and 9-12 make a team and have to put on fisherman's gear--oil skins pants and jackets, boots and then run while carrying a fish down the road and back and then the next person has to go.  Fun times for sure!  Sissy and her friends were representing the 7th graders and were the only all girl team.  Girl Power! 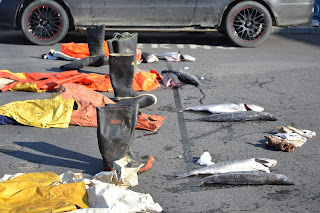 At the start--the gear and the fish! 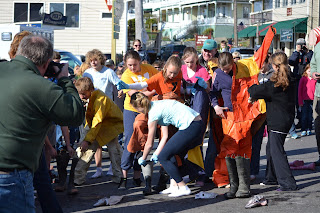 Getting Sissy dressed to run! 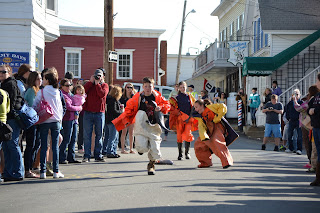 She dropped the fish!  What the? 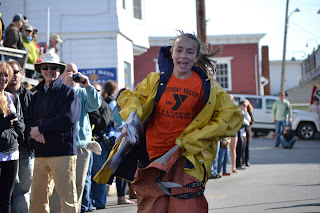 Coming in for the trade off--all smiles!  trying to keep her pants on

Sissy was the first leg of the race and once she got back the other girls did a great job and her team only lost to a group of 8th grade boys by 3 seconds!!  They probably would have won if she hadn't dropped the dang fish!  Ahh, next year.

She didn't smell too fishy at the end.  I guess we'll keep her.

Husband did the lobster eating contest. 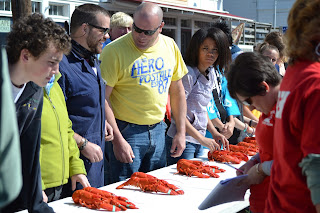 He totally expected to win but was beat out badly--as in like 40 seconds or so--to another guy.  It was how fast you could eat two lobsters.  Turns out the girl next to him tossed one of her tails in his pile so he ate 3 tails.  Oops.  Guess there are worse things than eating too much lobster...

Sunday was another beautiful day and called for a long (for me) run.  I haven't done anything over 4 miles in a long time so I thought I do my 6 mile loop on the roads around my house.  I headed out around 8:15 and immediately went back in the house to remove layers.  It was too hot!  Craziness!  Finally, it's warm (for Maine) here in Maine.  50* at 8 am is pretty dang warm.

This was my breakdown for mile 4 of my 6 mile run.  Not particularly fast, right?  Well, after around 3 miles I started to rumbling down below.  You know what I mean, right?  I hadn't eaten anything so I also had not down my morning business.  I was hoping to make it the hour before needing to go, but alas, that didn't happen.  Thankfully, there is a kinda public facility on the route that I was running that I knew I could drop in and use the facilities.  It's closed on the weekend and also during this time of year, but I knew where the key is kept and knew I could get in.

Thankfully, the door was a little open when I arrived and I ran in and found the toilet.  I thought to check to make sure there was toilet paper before sitting down and there was, so I was good to go.

Business complete, I went to flush and nothing.  Nothing happened.  The toilet wasn't working.  Ugh.  I had no idea what to do.  I didn't want to be the asshole that left a deuce in the toilet for people to find when they came to use the building but I couldn't make the dang thing flush!  Not to mention the stink.

With nothing else to do, I left to finish my run and get home.  Hubs is a plumber and he would either be able to fix it or tell me what to do.  I could also call the director and tell him so he would know.  Ummm, nope, husband was going to fix it.  There was no way I was calling anyone about this.

I got home and replayed my dramatic story to the husband.  His first question--no water, right?  Umm, yah.  Didn't really check that.  There was water in the bowl so I thought that was good enough.  He thought they had probably shut the water off for the winter and that was the problem.   He said to go back with a bucket filled with water and dump it in.  Once there is enough water in the bowl it will flush itself.

After a shower and will a 10 gal bucket in tow--toilet was flushed.  Thank god I'm not the ass that leaves a shit in the bowl.  Phew.

Have you ever had to make a deposit in an unexpected place while on a run?

this entire post just made me laugh..between running with dead fish and the toilet lol

This post has an amazing title. That is all. :)

very sneaky of the lady to toss the tail in your husbands pile!

Glad you got the toilet thing figured out, how awful and funny!