Christmas has just been a whirlwind this year.  I have been right out straight since last Monday and haven't had one moment to try to form a coherent thought on this blog.

I think it's rather inconsiderate to hold xmas on a Wednesday.  It really sucks for us working stiffs, especially those that own a business.  You could close early on Tues, (which we did) but then you still have Mon, Thur and Fri.  Or you could close on Thurs, but then there's still Friday to work.  Unless you want to close the whole week, which is not the best answer either.  Anyway you look at it, I hate xmas on a Wednesday.

On a happier note, we should be good for the next 6 years though.  Unless leap year screws it up somehow.


Christmas was like Christmas usually is.  Crazy flurry of presents unwrapping, paper flying, thank you's here and there and in 15 minutes, it was all done.  Kids were happy and thankful so I would call it a success. 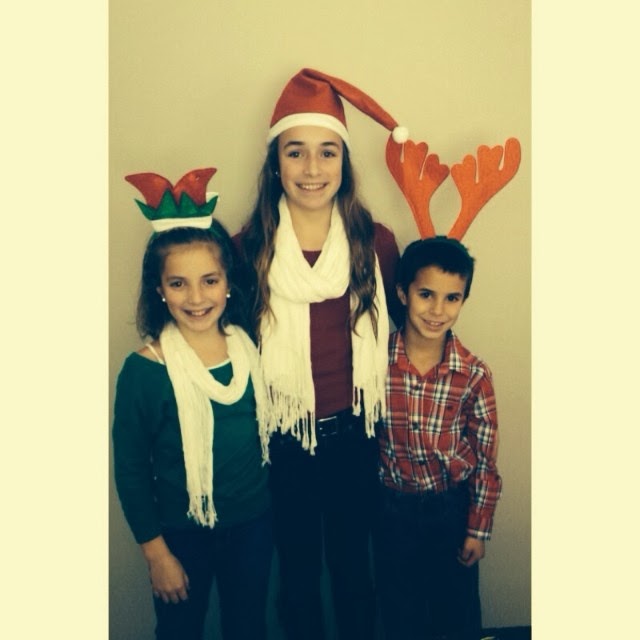 the best Christmas present ever.


I got out for a quiet, calm 6 miles in the early afternoon while everyone played with their new gifts.  (read: watch tv).  Even though I don't love the snow so much, it sure was pretty. 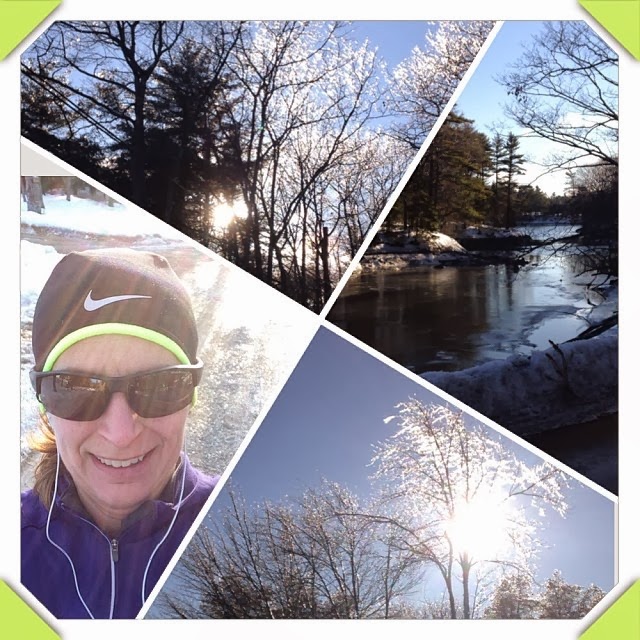 looks warmer than it was.  It was about 17* with some wind.  chilly!

The day after Christmas it was back to work for a germ-fest.  Shingles, conjunctivitis--I wanted to bathe in alcohol before heading home.  yuk.  Oh yes, and power outages.  Good times were had by all.

Saturday was the 4th annual Operation Jack 10K satellite run.  This is the second year I have run this.  It is a fundraiser for autism started by one of Danielle's friends whose son, Jack, has autism.  I don't have a personal connection to anyone with autism but I do love to support a good cause.  We didn't have a huge turnout, but it was still a beautiful morning for a run with new friends. 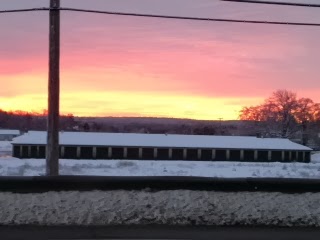 I had to pull over and take a picture of the morning sunrise.  This photo doesn't do it justice.

I love going to these small local runs.  I swear I get a new friend or two at every one.  It's so nice to be able to meet people who like running and exercise and don't think it's weird to get up at 6 in the dark to go meet strangers and run.  In 15* weather.  On a Saturday. 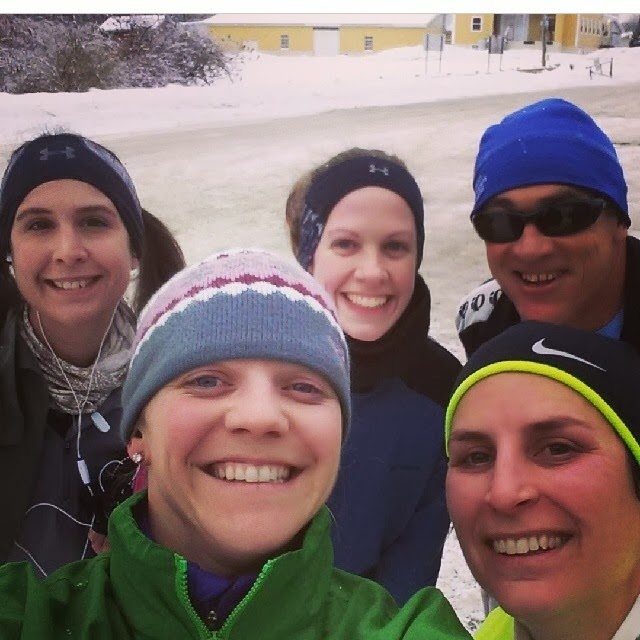 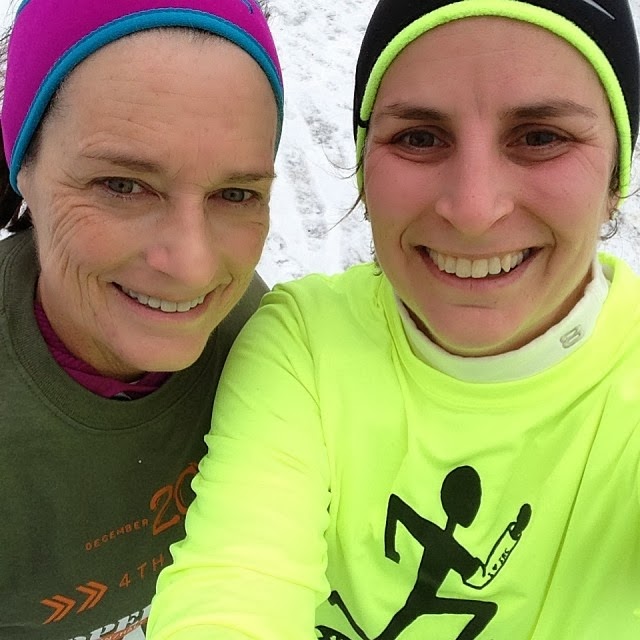 There seriously has got to be a better way to take selfies.  Must I look so old and toothy and big nosed in all of them??

Oh, and did you notice in the photo the most awesome Idiots Running Club shirt I'm sporting?  I love.  If not, here's a closer look. 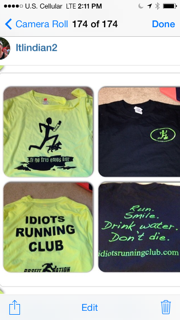 Lastly, I finally found a soup kitchen that we could volunteer at.  My step-sister, that I haven't seen in 20+ years works there and through the magic of facebook, we connected and made a plan to head up to serve.  It's one of two wet shelters (need not be sober to stay there) in Maine so I wasn't sure what to expect, but it was a really fun time.  Yes!  I said fun.  I wasn't expecting fun.  But fun is what we had.  The kids (and me!) loved serving the food and the people on the receiving end were so appreciative and thanked us so many times.  We are planning on doing this on a more regular basis. 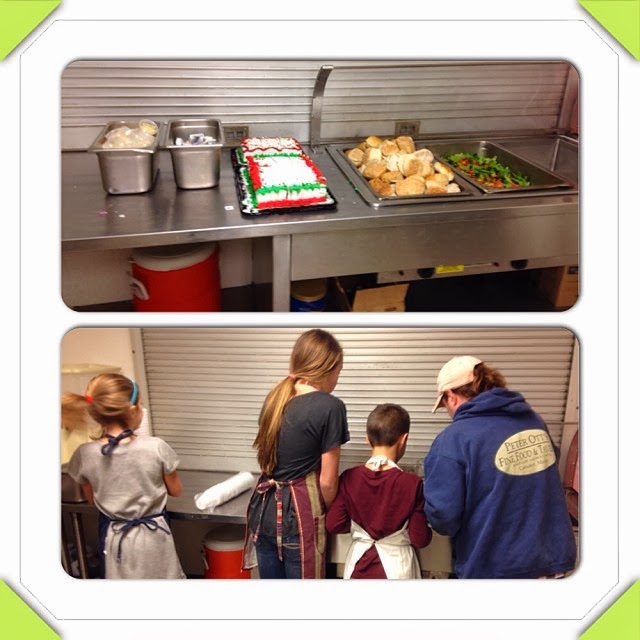 The Hope House in Bangor, ME.

We brought dessert, oranges and ice cream.  Guess what's needed?  Butter, salt, ketchup, sugar. Who knew?  Next time I'll bring so many condiments they won't know what to do with them all.  I asked about bedding since they house 79 people each night--nope, they don't need bedding now but they do need it in the spring/summer.  This is when many of them choose to sleep outside and take the bedding with them.  So I'll save that donation to bring in June.

What a rewarding time.  I kinda wish it had felt a little more like work so the kids would understand that they were working to help someone else, but maybe this was better.  Philanthropy can be fun!  Maybe that's a better lesson.

Have you ever volunteered at a soup kitchen/homeless shelter?

What is your favorite philanthropy or way to give back?

Posted by ltlindian at 1:31 PM

What a great holiday! I am so glad that you got to do many things that you enjoy.