This past weekend was a whole bunch of crazy as per usual in our household.  Princess was having her dance recital which means a really long dress rehearsal on Friday night and two shows on Saturday.  This year she had a pretty big part as one of the boys in the party scene.  We win in two ways--she has a big part and it's only in the first act.  Score!

Last year her group did Chinese which was only for 40 seconds and in the second act.  So you had to wait around all show for just a 40 second role.  womp womp


Princess is the boy on the far left.  This is a short look at her part.

This seriously took a lot longer to post on here than it should have.  I swear I am a computer idiot sometimes.  This was a portion of the dress rehearsal which is why not everyone is in costume.

Mother Nature has so graciously decided that it is going to be colder than the Arctic here this week--we are talking highs in the 10's.... as in 10 measley, pitiful degrees.  Which means that when you wake up it's more like 2 degrees.  I know it's hard for you California/Florida people to understand exactly what 2 degrees feels like when  you are all crying about your pathetic 50* low.  Wah.  My heart bleeds.

Anyway, highs of this nature dictate that I bring my run indoors to the track at the Y.  Thank you sweet Jesus that we have this track because I just cannot bear to use the treadmills with any regularity.

My mother was down visiting from the more northern tundra where they chose to live (God knows why) and she's been walking 12 miles/day since last spring.  She has since been banished to the treadmill and elliptical as well because of the frigid temperatures where she lives.  Anyhoo, we had a small window of an hour before this kid's basketball game and that ones dance thing so I brought her with me to the Y so we both could get some exercise in.

Let me just say how proud of am of my mom.  She has lost somewhere around 50 lbs with her 12 mile walking every. single. day. thing.  It's really pretty impressive.  I was so surprised to see her run even!  You should have seen the form!  She looked great.  I'm pretty sure I can get her to do a 5K with me in the future.  She could run it.  I know she could.

I got 6 miles in during that 55 minute period.  I did 5 straight running miles and then 1 mile of plyometrics.  Here's how it went, in case you want to shake things up. Eight laps is a mile on our track.

Lap 1--walk
Lap 2--high knees for 1/2 lap, walk the other half (don't judge, high knees is HARD!)
Lap 3--butt kicks--basically try to kick your own ass with your feet
Lap 4--side shuffle facing one way 1/2 lap, face the other way for the other half (again, HARD)
Lap 5--high kicks  I did this walking.  Walk 2 steps, kick.  Walk 2 steps, kick with the other leg.
Lap 6--run backwards
Lap 7--side shuffle a full lap but switch direction every two shuffles
Lap 8--walk/cool down

If you have any other things I could add to this, I would love to hear.  Whatever I can do to confuse my muscles and mix things up.


Sunday night we had a giant snowstorm so there was no going anywhere until after noon.  It took a couple of hours to get the yard such that we could even get off the deck or drive anywhere.  Thank goodness everything was cancelled so we didn't have to go anywhere.  I did think it would be a perfect day for a snow run, which is what I did.  I donned my trail running sneakers--I thought they would have more traction than regular--and they did.  I had gotten them free from a twitter chat so I'm thankful to be able to use them.  I do wish I had gotten ones with a little more cushion..... Next time.  Inov8 in case you're interested. 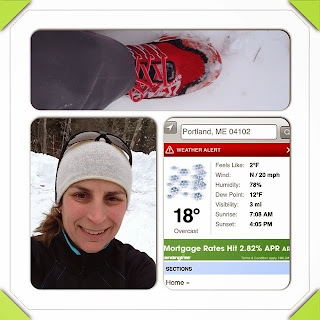 Once I got past the frozen wind in my face, the running was actually quite nice.  It was slow going due to all the snow, but my calves sure did get a workout.  Good stuff.


Do you run in the snow?


Any good plyometric exercises you would care to share with me?

Posted by ltlindian at 1:35 PM

I have a TON of indoor track workouts if you'd like any. They kick our butt every Friday!