About 6 weeks ago, I won an entry into this race on Facebook.  I wasn't sure if I would go or not since it was 2 hours away from home, but with a free entry I wanted to keep my options open.  Beverly, MA is pretty close to my in-laws house so it really wouldn't be a big deal to drive down.

It turns out that my husband and friend would be putting in a new door at our house that weekend and they really don't need my skill set to do that (thankfully).  In fact, it is much better if I'm not around since there is lots of banging, sawing, swearing and dust making going on.  Which is super annoying if you aren't the one doing the banging, sawing, swearing and dust making.

I decided that I would leave early Saturday evening to get to my in-laws around 8 p.m.  I was just about ready to leave when some weird looking lines on my back tire just happened to catch my eye. 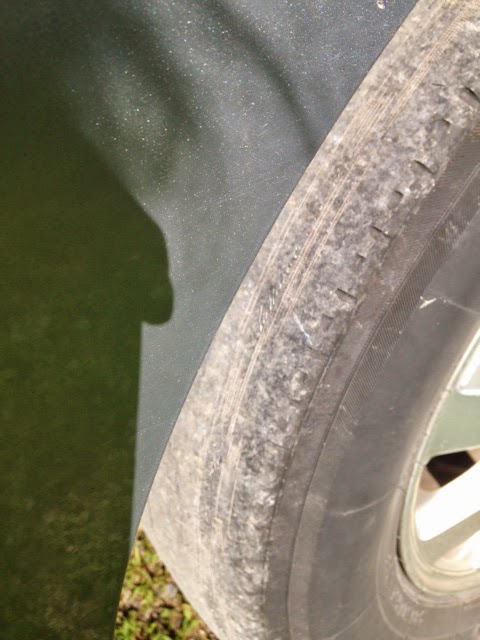 A closer look revealed that there were actual metal pieces sticking out of my tire.  I guess this is the "radial" part of radial tires?  At any rate, I was thinking that perhaps it was not the best idea to drive two hours (each way) on a tire that worn.  A quick FB poll confirmed that fact.  Side note:  I love that about FB--within 10 minutes I had about 12 opinions.  All said no driving.

Good thing we have 3 cars.  Trip was still on.

I'm not familiar with Beverly and had no idea of the route so that night I took a moment to check out the website to see where I would be running.  They had a map and an elevation chart. 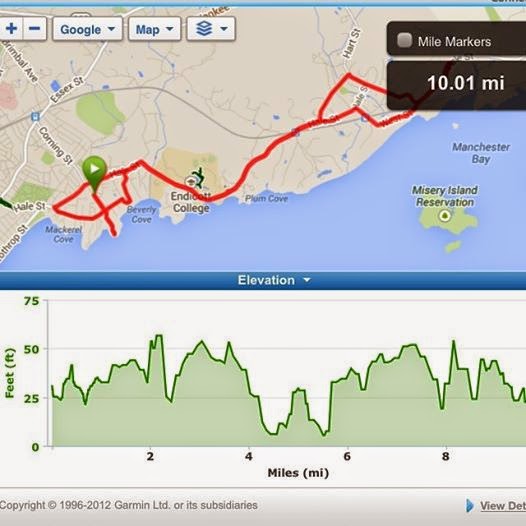 Now if you are like me, you just briefly look at the graph and think: "Holy shit.  This is going to be a death march".  If you are smart, like some other people... (Sarah E), then you might take a moment to look at the scale and see that maybe it's not that bad.  But that's not what I did, so I thought this was going to be a hilly, hot slog to the finish. 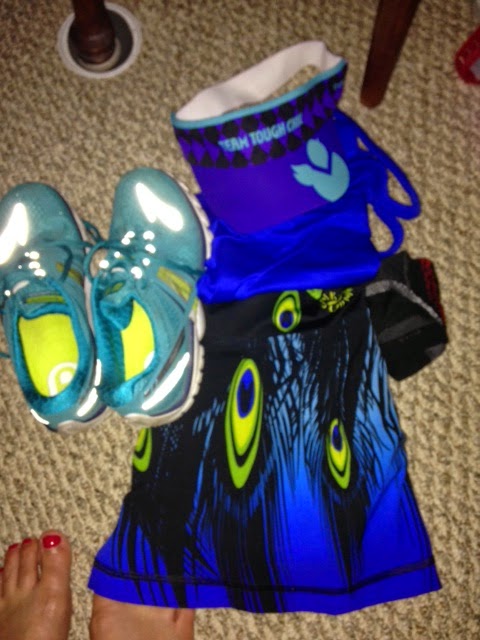 The race was starting at 7:30 a.m. so I arrived at 6:30 to pick up my shirt and bib.  No line, no pomp, no circumstance, just here's your shirt, here's your bib.  Quick and easy.  I wish I had known they were men's shirts because I would have chosen an XS instead of a S, but whatever.  It's a nice Brooks tech shirt and it's better than what you get at most races.  Especially one with a $35 entry fee.  (I think that's pretty cheap for a 10 miler.) 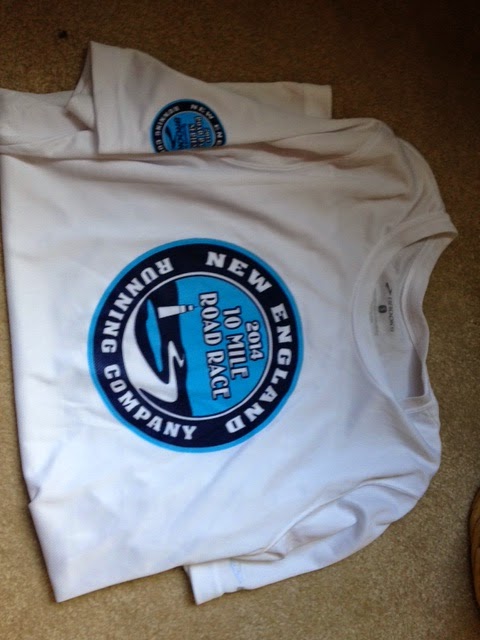 Parking was a little weird in that you had to park a short walk (5-7 minutes?) away from the start/finish area.  Not being from Beverly, that was a little confusing at first, but I managed to figure it out and since I was there early, I got a decent spot that wasn't half on someone's lawn.

The race started promptly at 7:30 because they needed to beat the commuter rail that comes through.  Smart call, because I would be pissed to stop running to wait for a train.  Anyway, the course wasn't nearly as bad as I had imagined from the elevation chart.  In fact, it was pretty flat by my standards.  Like usual, the first 5 miles were pretty comfortable for me and again, as usual, I went out too fast. 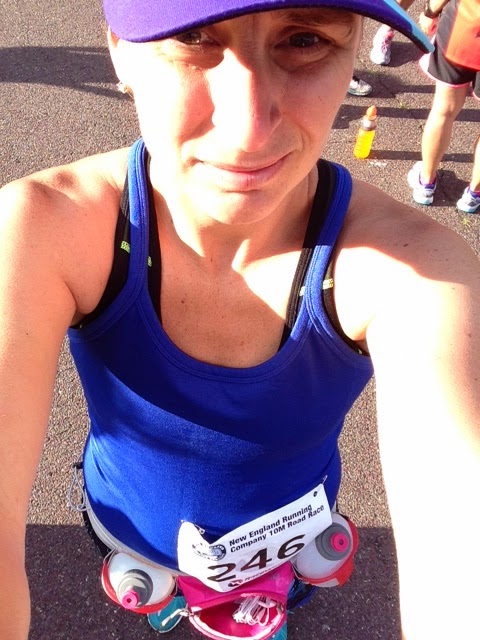 sneakily trying to take a selfie without 300 runners noticing

Around Mile 3-4 a very nice woman came up behind me and asked me about my skirt.  We chatted for awhile, meaning she chatted and I said umm hmm and yes and oh really? inbetween my trying to breathe and keep her pace.  I did add a few things, but she was clearly more of an endurance runner than I and a multiple Ironman finisher and currently training for the Chicago marathon.  I really thought she was lovely and wished I could have kept her pace because I enjoyed talking with her.

side note: you are welcome InkNBurn for the new customer.

Mile 6-7 is usually where I start to crash and burn on these longer runs and that held true for this race.  I'm just not that great at keeping pace after 6 miles.  As I look back at the elevation chart, it looks like that was a slow incline so maybe that was part of it, but I just could tell I was slowing down here.

There was a hill right before (during, just after? not sure) Mile 8 that just about sucked the will to live right out of me.  I ended up walking up it because I just couldn't make myself slog up it.  Turns out, I'm a pretty fast walker cause my splits were all under 10:00.  I was pretty happy with that.

After the Mile 8 shuffle, I felt like I managed to pick up my pace a little.  Well, at least I felt like I was moving a bit faster.  I guess I wasn't according to the time, but I mentally felt like I was moving better.  I didn't really care for the last part of the route because you could see where everyone was finishing/finished, but you had to turn left and run down into this cul-de-sac, turn around and then head to the finish.  ugh.  But I guess I managed to find some energy because the last mile was pretty fast! 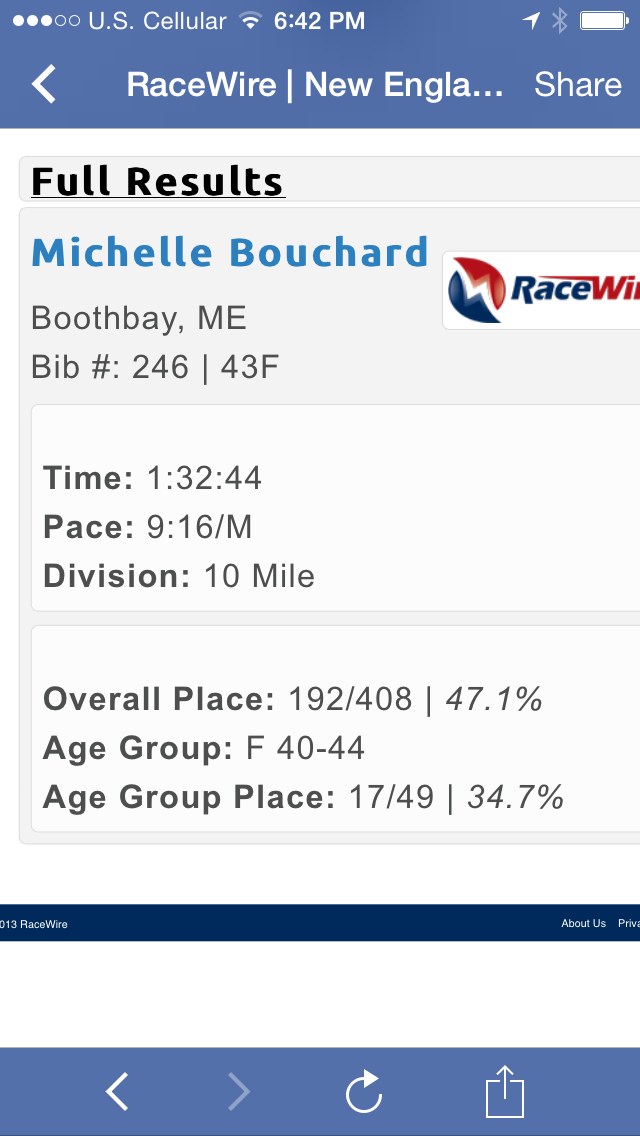 Not too bad for this old girl.

I really enjoyed the race and wish I lived closer to participate in more of the New England Running Company's events.  They had volunteers at every turn making sure you were going the right way and also cheering you on with their voices or cow bells or whatever.  I felt like the organization of the event was excellent.  There were not a lot of bells and whistles (other than the cow bells....haha), but the price of the race was perfect for that.  They had the usual food at the end:  bananas, bagels, juice, water and small bags of smartfood and veggie straws.  The timing chip was in the bib and the results were posted almost instantly.  I noticed that they had tall beer glasses for the age group prizes with something in them, but I didn't stay for the awards so I don't know what that was.  Looked like a gift certificate for something.  There was also a photographer taking pictures at the finish and out of the 6 he took of me, this one is the best. 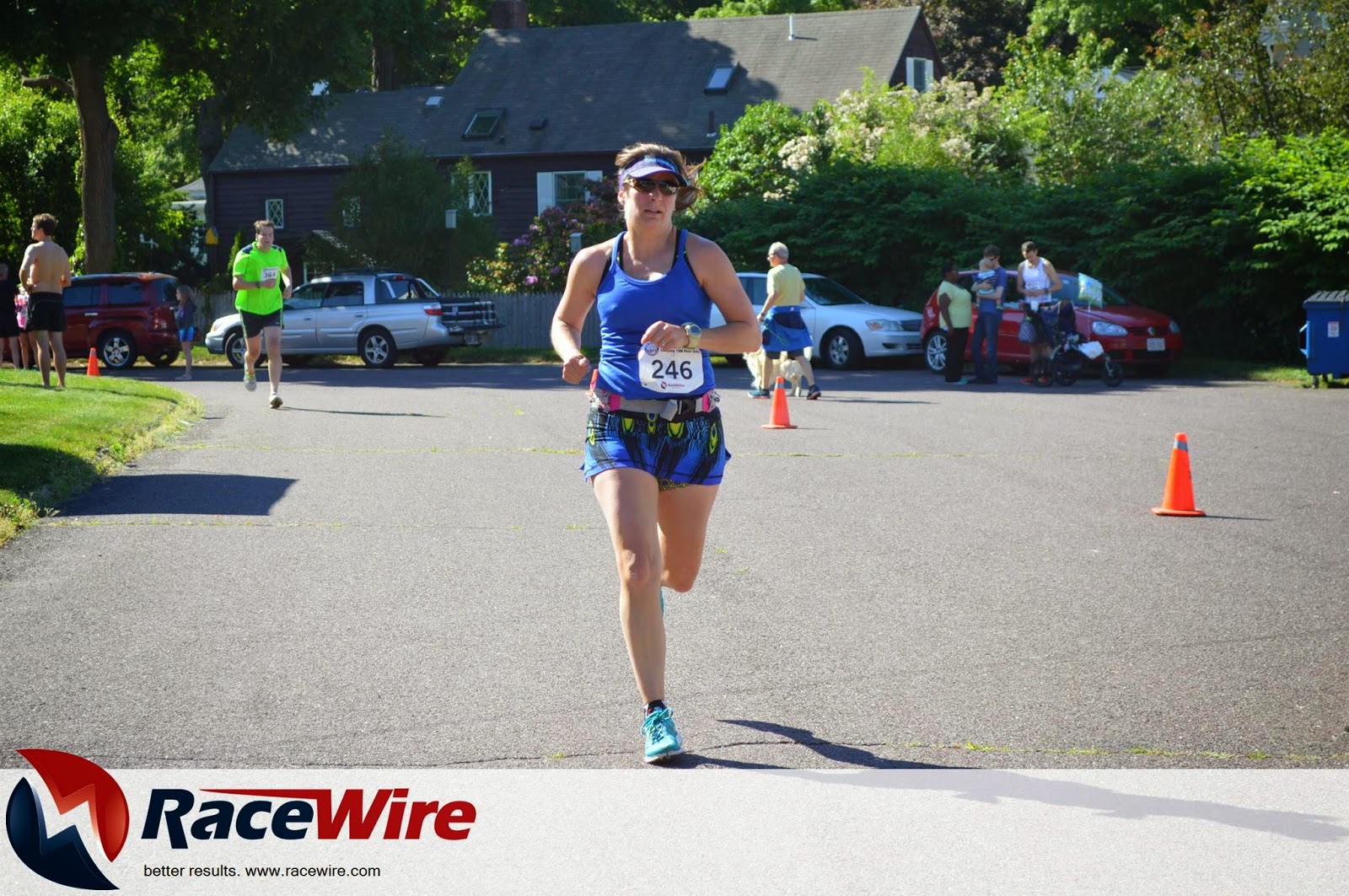 The more I look at it, the more I like this picture.  I kinda even look like a runner.  AND I'm chicking that guy behind me.

I wish I lived in an area that had races like this every weekend that were nearby, accessible and inexpensive.  I would run one every weekend.  This was done and over for me by 9:10 and I was back at my in-laws and showered by 10:00.  Still had the whole day ahead of me.

Something to look for when it's time to retire, right?

First, also love the skirt! Been digging the INKnBURN stuff...might have to splurge soon.

Second, I ran a marathon that included a train crossing. Yes, the train crossed the route at about mile 17!! I fortunately was not interrupted, but many were. Crazy.