This was once jam-packed weekend of dance!  Holy moly!  It all started Friday night with dress rehersal for The Tap Nutcracker that Princess' Dance Studio was putting on.  Dress rehersal was supposed to start at 3:30.  Well, our school doesn't get out until 2:40 and we live at least 1 hour away from the auditorium where the recital was being held.  Obviously, we were going to be late.  But not really, because they are always running behind.  So we arrive at 4 and they are just starting to pass out the costumes.  Our group didn't actually get on stage until 6:00 p.m.  Ugh.  And of course, we had two pieces to rehearse.....  Finally we were finished at 7:45.  Long frickin' night.

Oh, I forgot to mention that on the way to the dress rehersal, my husband calls me to tell me that he totalled his car in an accident on his way home.  Thankfully, he and everyone else involved was not hurt, but his car is pretty much toast. 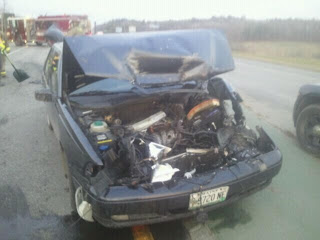 Yes, he got out of that without an injury.  Hard to believe huh?  Volvo's are one tough car.  Thankfully, we have another vehicle for him to drive while we deal with the insurance stuff on this one.

We were up and at 'em for basketball at 8:00 a.m. on Saturday.  I managed to squeak in 3.2 miles on the track while Manimal had his basketball.  I ran 2 miles and then did 1 mile of alternating laps of sprint then jog.  I never sprint and I probably should do it more because I was sore yesterday and still sore today!  One fun thing--there were two guys doing some sort of physical fitness test for police or coast guard on the track with me.  I had already done one mile and then they joined me.  I was ahead of one the whole time (hee hee).  The other started out fast but by the end of his first mile and my second mile, I had lapped him and was working on lapping him a second time.  (heehee)  Chicked at the track!

We had two shows of The Tap Nutcracker on Saturday.  The show was really great!  Princess was a mouse and a bon-bon.  Here is a pic of her dance group as mice.  Princess is on the right end in the back. 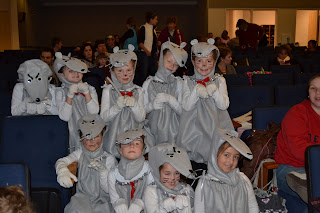 Pretty darn cute huh?  They did such a great job!  In the second act, they were bon-bons that come out from under Mother Ginger's dress.  "Mother Ginger" was actually a dad on stilts in a big striped dress!  That was pretty funny/cute as well.  Here's a bon-bon pic of them getting ready: 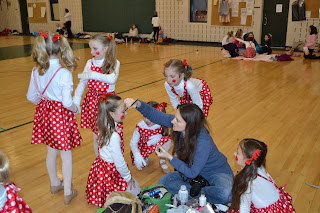 So far this is my favorite show.  I love that the older girls dance with the younger girls.  Obviously, they do pieces by themselves, but some scenes have 2 or 3 different levels of dance all tapping together.  And you know what a treat it is for younger students of anything to work with the older students.  I can't wait to get the DVD!

The last act of our weekend was taking our Girl Scout troop to Boston to see the Rockettes Christmas Show at the Wang Theater.  That was a great show as well.  It was a long day--3 hour drive each way! but we survived it and had a great time.  Thank you Girl Scouts for the discounted tickets.  It made up for the $30 parking fee.  Don't I love Boston!  :)  $30 parking, $5 coffee, buying a token to 'unlock' the bathroom...  I so miss Boston in some ways, and in some ways I don't miss it at all.

No Christmas shopping done at all this weekend.  Eek.  Here's to hoping that I get some gifts purchased.


Any Nutcracker/Rockettes shows in your future?

Posted by ltlindian at 8:15 AM

Such cute pics! not the car one though. Ouch! Glad nobody was hurt.
Insane here too. band concert was last week, holiday show this week, mega project is due, ice show rehearsals out the wazoo plus we're leaving for Key West on Sunday.
Shopping? Need 2 more things.

Sorry about the car wreck. I am glad that everyone was okay!

The pictures are great!

Geez...glad everyone was okay! I chicked several guys at the Jingle Bell 5K last weekend...too many to count! LOL! Got my Chica Bands on Saturday...I didn't expect them so fast! And I love them!!!!

Wow, terrible picture - so glad no one was hurt.

Your weekend sounds all good, but like another post I just read, seemingly packed to the gils!

I've been lucky in that my husband's filled in w/ some of our shopping while I had my little surgery. I think I'll keep him :)