Way back in April at 7 a.m., I somehow managed to get a spot in the coveted Beach to Beacon 10k road race.  This is the biggest road race in Maine drawing an elite crowd with a purse of $10,000 to the winner!  (which wasn't me, btw...)  Over 6,000 runners were on track to race so you can imagine what fun bib pic-up would be. 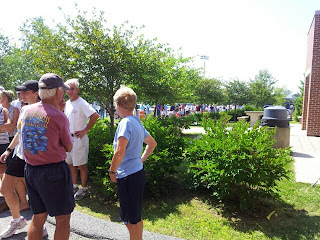 Thank goodness we were first in line!

We got in finally and since I knew my number, I went right to the table to get my bib.  Then off to the expo part to get my shirt and goodies.   Our local grocery store was a sponsor of the race so they had a table at the expo giving away fruit, cliff bars, shot bloks and $2 coupons to the store.  In line in front of me a woman kept grabbing more and more of the coupons all the while talking away like she wasn't actually hoarding the coupons.  She wasn't even racing!  It was her husband that was the racer....  She was told twice to put some of the coupons back so that others could have some, but nope.  She held right onto all of them--probably about $50 worth.

Someone straighten my ass out if I'm ever that cheap that I'm reduced to hoarding coupons at a race expo.

The expo was ok--I grabbed a few things and headed out.  One thing that did bug me was that they didn't give you a bag to put your stuff in.  The grocery store sponsor was handing out plastic grocery bags (you know the ones I hate?  that land fills are full of??  Yah, those ones) to carry your loot in.  B2B gets a D for being green and saving the Earth. 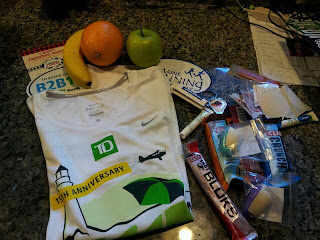 I did get some nice fruit though...

We had about a 1/4 ish walk to the start from where the bus dropped us off and I took that time to start the text frenzy on my phone to try to find my friends.  Can you believe that in a crowd of 6000 the first person I saw who I knew was Jen of milesmusclesmommyhood??  Crazy huh?  Although, I will say she was pretty easy to notice in her super excellent Rev3 tri kit!  <just a little jealous> 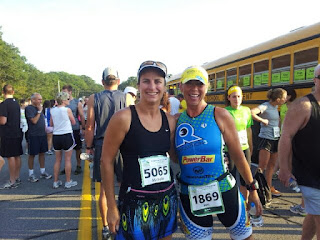 As you can see, I opted for the most awesome peacock skirt from InkNBurn!  I got no less than 5 comments from random runners on that skirt.  It was pretty sweet and I felt spectacular in it.

I also managed to find my friend Bobbi and her husband and another friend from high school. 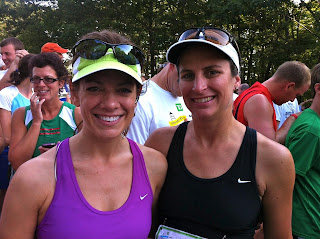 Bobbi and I waiting and waiting to start. 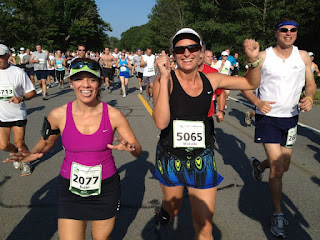 I love this photo so much!  We are mid-run and our friend Brent is to my left.  Our faces are priceless and my skirt rocks!

This was one pretty hard, hot and humid race.  I was trying to beat my previous 10K time of 58 something.  I was pretty sure I could do that.

My friends and I ran together for about the first 3 miles.  After that, I wasn't able to keep up with Brent and his friend and I think Bobbi and her husband dropped behind me.  I ran the last 3 by myself and it was not easy.  I guess all those runs I haven't done really made a difference in me losing pace.  I really need to work on going easy at first and hard for the end--not the opposite.

During the last mile and especially the last 1/2 mile, people were dropping left and right.  I passed at least 3 people that were getting attention from medics--I think they had passed out from the heat.  It was a little scary to see that and I hoped they would be ok.  One guy was .2 miles from the finish.  I kinda wanted to grab his arm and drag him with me to the finish.  I mean really?  Wouldn't you want someone to do that for you?  I would be so pissed if I ran the whole race, just to drop at the last .2 miles and not finish.  But he was already being attended to, so I just kept running.

I was one of the last runners that made it under an hour by the official timer.  I knew my time would be better than that because it was a few minutes after the gun went off before we even got to the start line.  My Garmin read 58:02, which I was not really happy with.  It did beat my previous PR, but not as much as I had hoped.

The finish was crazy and people were everywhere.  You had to walk up this longish hill to get your medal and then even further to get water.  I really just wanted to sit and die, but no!  You had to stumble your way up a hill, in the humidity, no shade, before you could get water and die.  This, I did not like.

Once you were out of the finish area, there was plenty of food and water and goodies to be had.  I got some snacks and rested for a moment and then made my way to the buses.

All in all a great race and lots of fun.  I disliked the humidity and how far the water was from the finish line.  I loved the spectators who lined the roads all the way, I loved finding my friends and running with them, I loved knowing elite runners were there (even though I never saw them....), and I loved that this race was in Maine.

Official chip time 56:52!  Totally happy with that!  Just about 2 minutes off my previous 10K time so I would declare this race a success! 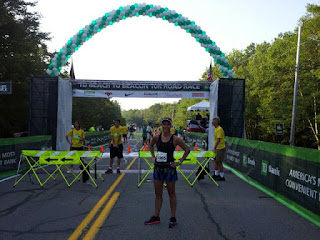 A photo at the start to finish my report!

You did a great job and looked incredible!!! Your skirt is the best ever. I've never been a fan of the hill and how far you have to walk after crossing the finish line - it is crazy. But at least there's plenty of food to be had when you get there!

Was soooo freakin HOT! It was THE worst time I've ever posted on B2B, yet by far the most FUN :) Loved having you there this year! And I agree on the hill. I'm pretty sure Greg carried me to the top...

You did great. I love the B2B...it's a run race and the spectators are so much fun. I agree about that damn hill and the water though! I hope to run it next year. Btw, YOU MUST TELL ME WHERE YOU GET YOUR SKIRTS.

THAT SKIRT IS FABULOUS. No really. I love it, and I blame you for my new obsession with InkNBurn. Congrats on that speedy 10k time!! Woot!

Solid PR - congratulations on achieving your goal by racing hard !!!