1.  First and foremost, I will spill the most exciting news ever!  I was chosen for the Mezamashii  Project hosted by Mizuno!  Woo!  Due to the abundant kindness of my much cooler running friend Jen, from Running With the Girls, I received an invitation to try a free pair of their running sneakers.  You heard that right, FREE!  I had signed up a month or so ago but never heard a word until the other day when Jen sent me an invitation.  I'm pretty sure I didn't get chosen on any merit of my own, but apparently Jen has some connections somewhere!  I kinda felt like the dorky kid who has a cool friend and gets to sit at the popular kid's lunch table.  Thanks, Jen!

So I went to the website and took the 'which shoe is right for you survey' and ended up with a few choices.  I ended up choosing the Mizuno Wave Enigma 2.  It had one color, so blue it was. 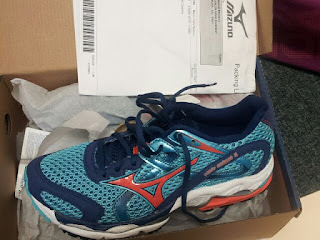 They arrived within 2 days of ordering them!  Talk about fast delivery!  I was really excited to try these sneakers because, as you might know, I have been dealing with heel pain from plantar fasciitis and was wanting to try a bit more substantial sneaker.  These are still somewhat minimal but there is more to them than my Saucony Kinvaras.

So far they have been brilliant!  I maybe wish they were a 1/2 size larger but my toes aren't jammed and it hasn't bothered on either of my 4 mile runs.  I've used them twice for 4 milers at lunch time and my feet have been very comfortable in them.  I can't say they are any better for my heel problems than the Sauconys but they certainly haven't aggravated it either.

I'm so happy to have a different type of shoe to add to the running rotation and hopefully keep my feet happy.  Oh!  And they match my Runningskirts capris just perfectly! 2.   I had originally posted here about a runner friend getting shot but after posting I learned that that wasn't the correct story so I put the post back into draft until I could get the truth.  Small town and news (albeit incorrect) travels quickly.  There was a someone accidentally shot, but it wasn't my runner friend.  We still don't know all the details and I hope everyone involved is ok.  However, it does bring up the issue of running during hunting season in this rural area and taking care to protect ourselves.  What can we runners do?

Let's be safe out there!


3.  Ok, so help me out here.  What's the deal with all the mustaches?  Is there a mustache craze that I am missing?  Did some Disney Channel kid star put on a mustache and now it's all the rage?  Clue me in, cause I'm feeling a little left out.  Again, like the dorky kid wanting to sit at the cool lunch table but I don't have my mustache so I can't.... 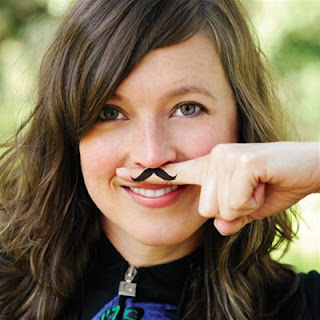 both photos taken from mustachestuff.com 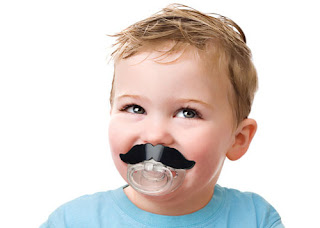 This one here is a little creepy.

So what's the deal with the mustaches?  Anyone?  Enlighten me.

Posted by ltlindian at 1:13 PM

I am very happy you like your shoes. If you want, you can call and exchange them for another size. You'll have to pay for the return shipping.

I hope like hell your friend is okay! Running during hunting season scares the crap out of me. I hear gunshots all of the time on my road. It's usually this time when I am solely on the rail trail or I do as much treadmill as possible just for that reason. But I do have my hunter orange gloves and hat!

& I seriously have no idea about the mustaches. I'm a loser.