I'm not sure that my kids have enough activities.  Maybe I should sign them up for more.....  Holy crap, between dance recitals, basketball and sleepover camp I was running around all weekend!

Friday I had off because my eldest was at a Leadership Development Camp held at a really rich boys summer camp in the area.   Camp Kieve.  Not Camp key-ev, but pronounced key-ayve with a long a.  Well, then.  Pardon me.

Anyhoo, going to Camp Kieve is a pretty big deal around here because 1. it is an expensive as all get out summer camp that most locals cannot even dream of attending (10 day camp is $2750!) and 2. it is a sleepover camp.  During the off season, they hold the Leadership Development Camp for the area schools to send their 6th, 7th and/or 8th graders for the week.  Some schools have it in their budget to send their kids.  The kids learn how to work together to solve problems and get to try some pretty awesome things like ropes courses, rock wall climbing, and partner climbs on the high ropes.

Friday was the last day of 5 days of overnight camp for Big Sissy.  She had never really slept overnight anywhere before so this was a huge deal for her.  I had left her in tears at the school on Monday and there were to be no phones allowed at the camp so there would be no communication until pick up day.  So needless to say, I was very excited to get there and see her.  I knew she was ok because she had sent me a couple of secret text messages on her contraband phone.  But it was great to see her and see that she had overcome her fears of being away and she had a great time!  Thank you Kieve for the great experience!

After getting one tired 12 year old and her 13 bags of stuff home, I had to turn around and head north for Princess' dance dress rehearsal which was an hour away.  Gah.  Why is everything we do an hour away???  Why?  Thankfully, that was short and sweet and we were back home by 7.  Completely unheard of at this studio to be done that quickly.  And since I was home by 7, I was able to get on my bike trainer and crank out an hour while watching the most stupid Adam Sandler movie Jack and Jill.  Seriously, so dumb.  AND crank out 4 loads of laundry, clean the kitchen and the living room!  While everyone was sleeping!  ha!

What is it about a clean house that is so satisfying?

Saturday I got my 5 mile run in the morning and then needed to head north again for the recital at 1 and 6:30.  The family came to the show at 1 and then headed south for Big Sissy's basketball games, while Princess and I stayed north for the second show. 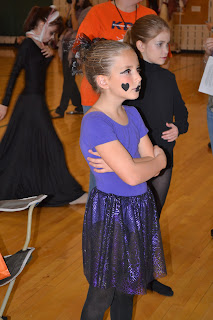 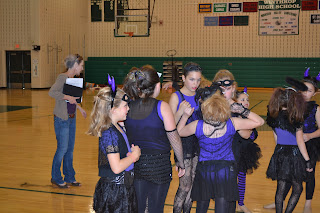 Beautiful monsters!  Princess refuses to pose for me so I have to shoot photos in stealth mode like a Ninja.  which clearly, I am bad at.

I love this recital.  It's so fun!  I mean, really, what other dance studio does a Halloween show?  The dances are all spooky, monster, Halloween-themed and the costumes are made up a week before.  Often they use stuff from previous years and it's built around their level's leotard color.  Princess is a purple level.  Duh.

Now it's hurry up and get ready for the tap Nutcracker!  Only 6 weeks away....

Sunday was grocery shopping and swim day.  I'm so happy the YMCA is open again on Sundays.  It is so much easier to get my swim in on Sunday than trying to rush after work on Friday.  Plus, I can bring the kids and they get some exercise and time to play with their friends.  Not to mention everyone gets to take a hot shower for as long as they want and we are all set for school the next day!  Winning! I did my usual 2000 yds and then headed home to eat.

And now Sandy is on her way to wreak havoc on the East Coast.  So far Maine is just on tap to receive wind and rain but a bunch of stuff has been cancelled already so we'll see how that goes.  We have a generator at home that runs the whole house so no-power for us is not a big deal.  Work is another thing.  It's a little hard to do eye exams without power....

I hope everyone stays safe!

On a sad note, the HMS Bounty has sank off the coast of North Carolina.  The HMS Bounty is a 3 masted ship that was in the Pirates of the Caribbean movie and has spent a lot of time in Boothbay Harbor over the past few years getting restored at a local shipyard.  I drove by that shipyard so many times watching as they made progess on her.  Of the 16 member crew, 2 are still missing.  Coast Guard is working to find the other two.  I am so sad for everyone involved and I hope that despite Sandy, the CG will be able to find the remaining crew.  Here is a link to the story.

Here is the crew: 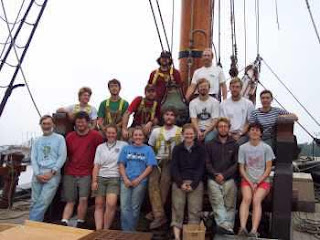 Please let everyone be found alive.

wow you have been up to some busyness!

I'd say you are busy! I have always pronounced it key-ev. And the reason you live an hour away from everything is because you live at the end of a peninsula with only one road in and out. :-P It seems everything is 30 minutes away for me!