This past weekend was the Rocky Coast 5K/10K road race in Boothbay Harbor.  I have done this race quite a few times and it was my first 5K ever around three years ago!  I wasn't sure if we would be able to run it this year because Sissy has basketball on the weekends with her AAU team and last year we had to leave early to get to it.  Thankfully, they still allow on site registration so Friday night we decided that we were going to run it once we knew basketball was going to be late afternoon.  Sissy wanted to do the 5K, Manimal was going to do the 1 mile kids run and I would do the 10K.

Manimal had his race first at 9:30 a.m. so we watched him race.  They changed the kids run from under 12 to 10 and under so he really wanted to try to win it.  I didn't think he would because there were quite a few fast 10 year olds running but I knew he would win his age group.

It's a little less than a mile race, I think around .9.  They close the street and the kids run down to the grocery store and back.  We see the first of the kids coming and it's the older boys, but then I hear, Michelle, is that Manimal??

And it was!  He was in fourth place overall, only getting beat by 4th graders.  Manimal is in second grade. 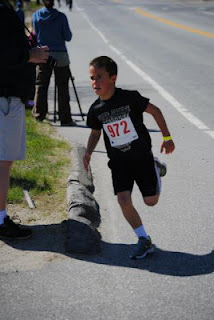 The 5K and 10K had the same start so Sissy and I started together.  The race didn't start until 10:30, which is a little late for a race.  I was a bit worried about it being hot but it worked out fine thanks to the coastal breeze.

I had no expectations for this race.  Zero.  I didn't really have breakfast other than some raisin toast and a few sips of Mt. Dew.  The weather was perfect, 50's and sunny, so that was in my favor.  I hadn't done any exercise in two days due to crazy family life so maybe rested legs were in my favor.
I forgot my headphones so it was to be a naked run, which is often better for me.  I get a pace and don't rely on the music to keep it for me.

I started out with Sissy but took off a bit from her when we hit the first hill.  I was running next to a girl who has beat me before and then I beat her.  I knew we were around the same pace so I asked her if she wanted to run with me.  I told her my training pace had been around 9:00 so that was what I was shooting for.

I didn't know if I could keep it for the whole 6 but figured I would try.  I didn't see the marker for 3 and 4 and couldn't do the damn math in my head anyway so I don't know what those splits were.  I did know no one was passing us and we were kinda in the front for females.

At the turn around we saw at least 5 females ahead of us.  One was absolutely flying!  She was seriously so freakin fast!  She ended up being 2nd overall with 37:56 time!  Impressive for sure.

Karen and I kept together for the entire race.  Neither one of us slowed down it seemed and I didn't want to finish without her at this point.  On the last mile I decided in my head that I wasn't going to try to beat her.  I really didn't care.  We had run the whole race together and I didn't want to try to dump her at the end.  I don't know what she was thinking but she didn't try to dump me either.

We crossed the finish at the same time.  They tore her bib first so she got in before me.  Whatever. 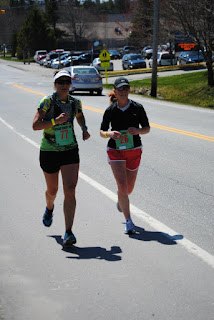 Karen and I coming to the finish. 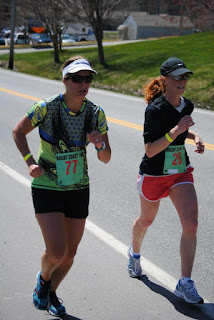 Closer so you can see the awesomeness of my peacock shirt from InkNBurn! 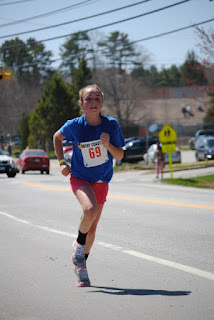 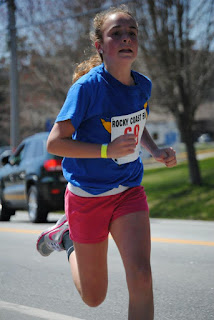 All photos courtesy of Peter Cole

Her time was good for first in her age group!  I ended up with 2nd in my age group, but only to Karen and we crossed at the same time.

That made for a pretty great start to the weekend.


Have you ever raced last minute and got a PR?
Posted by ltlindian at 8:52 AM

Congrats on the PR!! So Manimal ran like 6 minute mile pace??? WOWZA!!! Congrats to Sissy as well. Speed is in your family!

That is so awesome!! Congrats!

What a fantastic day of racing! Congratulations to all of you. I hope you're still basking in that.

WOW I love your blog!!! Congrats!
My name is Gracie Updyke and I am the CEO of Gracie’s Gear, the BEST pocket running bra and tank out there!!! I wanted to share our kickstarter campaign with you and I really hope you enjoy the video. If you feel compelled, I appreciate you sharing it with anybody. Thanks for blogging. I LOVE this.

Hey girl, my name is Gracie Updyke and I am the CEO of Gracie’s Gear, the BEST pocket running bra and tank out there!!! I wanted to share our kickstarter campaign with you and I really hope you enjoy the video. If you feel compelled, I appreciate you sharing it with anybody. Thanks for blogging. I LOVE this.