My oldest daughter is playing softball for the middle school team this year.  Our area is not known for it's softball... so the games often look like clips out of the movie Bad News Bears.  But really what does one expect when there is almost nothing for little league?

In fact, the first game of this middle school season, was the first real game that any of the 7th grade girls had played in.  Like where the kids pitch and catch the whole game.  Like where you call ALL the balls and what ever strikes there may be.  Like if you walk the entire team and they score 15 runs, you still have to get the 3 outs in order to finish the inning.

So, as you can imagine, my expectations for this season were not very high.  In my head, I had a goal of having one win.  With one game left to go, the girls have a record of 3-6!  So really, that's pretty good!

This weekend was a double header and the first game was really close.  It came down to the final inning and the other team tied the game.  We has last ups because we were the home team so all we needed to do was score one run.  Sissy got a hit and got on base.  Then she stole second.  And then third.  The next girl hit a grounder to the second baseman and who got her out, but by then Sissy had run home and they won!  11-10 was the score.  It was really exciting because it was the first evenly matched game they had and they did what they needed to do to win. 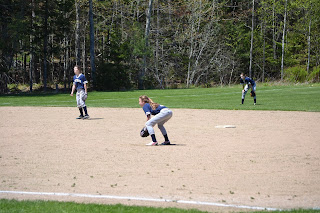 Sissy at second base 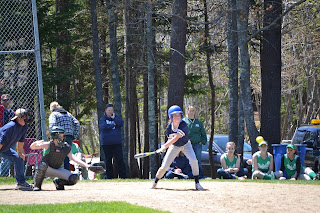 
So now on to the lessons in softball.  During the course of these games, there came a time when the infield popfly rule was in effect.  Which I did not understand.  At all.  I had never even heard of this rule.  My husband was very irritated not really very patient in trying to explain it to me but basically what he said was if the ball pops up in the infield, it is an automatic out even if the infielder drops it.  What?  She can drop it and it's still an out??  Apparently, yes.  He said it's to prevent the fielder from purposely letting it fall so they can turn a double play.  Ok.  Somehow, I just could not wrap my brain around an automatic out even if she drops it.

Fast forward to a play when the infielder drops the ball on a pop fly.  Me and another mom are calling out for the infield popfly rule.  But nooooo.  There was no one on base so it doesn't apply.  Cripes.  Thanks for the clarification.

It happens again and there are girls on second and third.  Once again, we are confused and want the automatic out.  Nope, there has to be a force play.  Ok another stipulation.

And one last exception to the rule, it can't be the third out.  Jeeezz..  It took 3 games and 15 innings, but I think we finally get the rule.  If someone had just explained it a little better to begin with....


The lesson learned in softball this weekend:

Shut up because you don't know the rules.