This is what is on the agenda for the summer:

2.  Lobster Roll 5K in Boothbay Harbor on July 26.  It's the 4th year for this race and I haven't missed one yet, so I'm not going to start now.  Fun, local race that raises money for the track they want to build.  Come join, please. 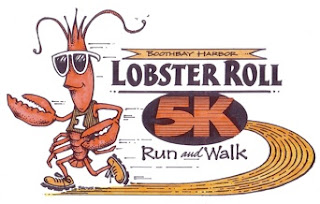 3.  Beach to Beacon 10K in Cape Elizabeth, Maine August 3.  Again with Bobbi.  I sense a trend here.... No logo because they must have it copyrighted or something, I wasn't able to click and copy..
4.  Rev3 70.3 Half Rev  Old Orchard Beach, Maine August 25.  With the idea that if training properly for this race does not happen, I will drop down to the Olympic length.  No Bobbi this time.  Although I was thinking of trying to convince her and her husband to find a swimmer and do the relay.  <mmmhmmm wah haha>  I mean really, she'll be ready to do either the bike or run by then, right?

5.  Maine Half Marathon in Portland, Maine October 6.  Again with my friend, Bobbi.  It will be her first half marathon.  My goal is to break 2 hours, so that is her goal as well.  She just doesn't know it yet.  She might think her goal is just to finish, but she is wrong.

That's it folks.  Pretty sure that is enough.  I'm on the fence whether to do the Bath Sprint Tri June 2 again this year.  It's the race I 'won' last year.  (I use the term 'won' loosely because even though I did win, the event had been rescheduled due to poor weather and many of the athletes were at another race on the rescheduled day.  But it is still a win.)
What is on your race agenda this summer?
Are you tackling a new distance or event this year?
﻿
Posted by ltlindian at 12:55 PM

sorry, youre not done.
6. MDI marathon.

ill see you at beach 2 beacon and rev3 (volunteering) and maine half. hell, maybe ill do that lobster 5k, sounds fun! can i bring a stroller?

I *LOVED* the Maine half marathon!!

Wow, great schedule of races!! Other than doing a "walk" marathon in Portland (OR) with Mom this Fall, I have no races whatsoever on my calendar.

But then again, I did just finish my marathon, so you KNOW I'm going to sign up for something (wink)...

That's one heck of a race schedule! Woohoo!