Time to review my activities for March.

Run--41.47 miles.  A bit better than February but not the 50/month I'm shooting for.  The weather wasn't exactly cooperative this month with temperatures averaging in the low 30's when we are supposed to be in the mid 40's.  Not a good excuse but I'm just so sick of it being 10* in the morning.  Who wants to run in that in March??  Answer: NO ONE.

Yoga--155 minutes.  The Y was offering free yoga classes to gauge interest in the class so I went to one.  The instructor spent a lot of time talking and explaining.  Somehow, I thought yoga was quiet and calming....  I think she was trying to teach like everyone was brand new to yoga, but I wish she had moved it along a little with less explanation and more doing.  The other attempt at yoga was home alone doing the P90X version.  Which was all about moving it along and left me more sore 2 days later than any other exercise I have done in the past year including a half marathon and an olympic tri.  Not sure what that says about my level of stretchiness....  As my brother-in-law said, it's telling you More Yoga!

Races--No races to speak of this month but I have signed up for a bunch of races for later in the year.  I got into the Beach to Beacon 10K for the third year in a row.  This race is easily the highest profile race in Maine and thus sells out super quickly.  Like 6000 spots in 4:52.  Thankfully, my fingers and my browser didn't fail me and I got in before it filled. 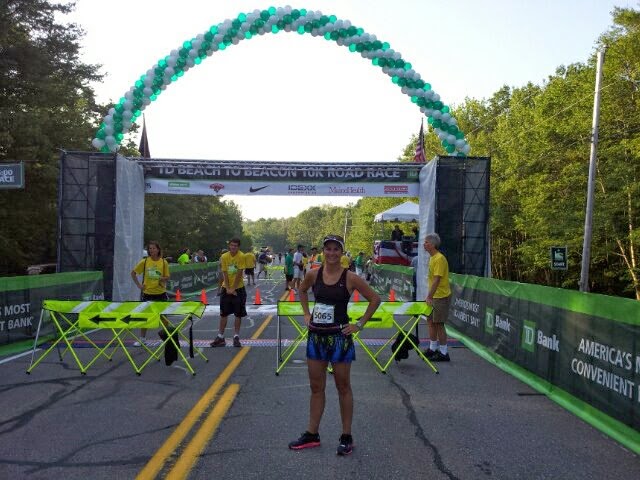 
The other race I signed up for, well actually a series of races, was the Bradbury Mt. Trail Series.  Danielle and I have been talking about this series for a bit now and we are both excited to finish it and get the Badass Hoodie.  There are 3 trail races on Bradbury Mt.--6 miles in July, 9 miles in August and 12 miles in September--and if you complete all of them, you are an official Badass and get the Badass hoodie.  We are both in it for the hoodie.  Sarah is joining us for the 9 miler and another friend of mine, Kayla, is also going to attempt all three.  I've never done a trail race before so this will be a first.

I have also signed up for the Color Me Rad run in Brunswick.  This isn't an actual race but still will be a lot of fun with the kids and their friends.  It's kinda cheap (comparatively cheap because if you wait until July to sign up it will be closer to $60!) at $29 and with the discount code YMCA, you get 10% off and 15% of the registration fee goes to area YMCA's.  The price goes up on 4/4 so sign up now and use the code to get the best price.


What I'm Loving--Life continues to be challenging right now and the weather didn't help things during March so I guess I'm not loving anything in particular.

What I'm Hating--not planning a vacation for this spring.  Super duper #FAIL.

How was your March?