Well, what a quiet blog week I have had.  Nothing very exciting to report.  Last week was a little lazy after the race.  Lazy blogger and somewhat lazy with fitness.  I did go to tennis and spin on Monday, Tues was spin, Wed spin and strength, Thurs spin, tennis and run at night, Friday run, Sat nothing and yesterday run.  Ok, so it wasn't that bad.  No swim on Friday because the lap time at lunch is being used for elementary school swim lessons through April.  I'll get back on track with that in May.

This week and next are going to be the real lazy ones as we are leaving for vacation on Wed.  10 days!  Vegas and Grand Canyon!  Woot!  But I suppose with all the hiking and walking around we are going to do, I may get some exercise anyway.

I found a bike to purchase this weekend.  I found two bikes on Craigslist that I thought were good ones.  Both were Trek 2.1, one was 2010 for $990 and the other was 2008 for $700.   Both ladies were firm on their price.  I looked at the 2010 because she was closer to where I lived, and it is very nice.  They both have the Shimano 105 gears and were equilivent except for price and year.  I just was having a hard time with the $1K price so I opted to get the older one for $700.   She also found the shoes so she is letting me take those with the pedals to match!  yay!  It's about a 2 hour drive from my house so we agreed to meet after we both get back from our vacations at the end of April.  Here is a pic of the bike: 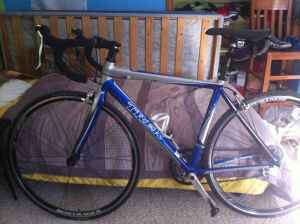 If I continue with this sport, then I will treat myself to a brand new bike in a few years.  For now, the used one is just fine.

We had such a good weekend here finally, the weather was just beautiful and it was really nice not having anything planned but packing and shopping (and finding a bike!).  My son earned his first stripe in jiu-jitsu on Saturday!  It was a bit of a suprise as we were thinking it was going to be today, so of course, I didn't have my camera with me.  :/  Thankfully, I at least had my phone and another mother had her camera so she got some great photos that she'll share with me.  He was so proud!  It was just the cutest thing.  Here's the photo I took with the phone, it's a little grainy... 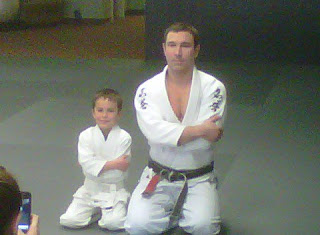 Is that not the cutest thing ever???

We'll see how that all works out.  I'm bringing about every piece of electronic equipment I have so I'll be totally wired as long as there is internet at the hotel.  I hope to update the blog at least once or twice and upload some pics.

Have a great week!
Posted by ltlindian at 6:29 AM

Congrats to your son!

Have a great vacation!

congrats on the new bike :D nothing wrong with used!
congrats to the little guy on his stripe :D awesome