What a weekend I had!  My first triathlon with my friend from high school just after a major snowstorm on Friday.  So that's how it began.  6-8" of snow on Friday.  No school for the kids and hardly any patients for me.  Saturday saw me helping my sister-in-law unpack and get back into her apartment.  (long story there, would make an excellent blog...)

Saturday evening came and I had to go pick up my race packet.  As I arrived at the University of New England campus, many thoughts were going through my head.  "I don't belong here.  What am I doing?  I don't do triathlons.  I'm going to make a fool of myself.  I'm not fit enough for this, I'm not skinny enough for this, I'm not fast enough."  (why do we do that to ourselves?  cue the Pink song--F*&%in Pefect.)   My husband and I took a moment to look around the transition area and pool area and get familiar with everything.  As I was looking over the race routes, another person checking in asked about the pool and the lane dividers and if they were going to stay in the pool for the race.  The volunteer said that yes, the lines were going to be in the pool so they could keep everyone in the correct lane and also some folks may need to hold on to them to rest.  What??!!  Hold on to the lane lines to rest??  Rest?? for 150 yds?  I began to feel a little more confident. :)

Sunday came and I was awake bright and early.  I had B bring me up to drop me off at 7.  (Race start was at 9:03.)  I wanted to get there and have plenty of time to set up and get everything just right.  B helped mybring my bike and gear in.  Somehow, he got to go into the transition area (maybe because no one was there yet....?) and help me set up.  That was nice to have him there for that.  Then he had to leave to head back to my mom's to get the kids and my parents so they could be back in time for the race.

At this point, I saw Jen from milesmusclesmom blog and introduced myself.  She was great in making me feel comfortable and less nervous.  She and another woman I just met, Michele, helped me to go over things and set up my area and talk though what was going to happen.  I tried to eat a few bites of banana and sips of Mt. Dew.  Nothing tasted good.

BD arrived and we chatted while her husband took photos and she set up her area.  I stole some of these photos from him--he was everywhere!  Capturing every moment.  :) 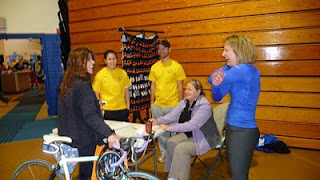 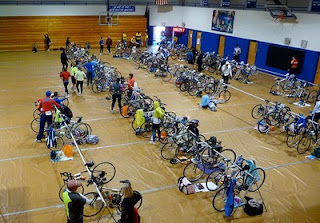 Here we are after we've been marked.  Of course, BD got the nice small markings on her hands!  I got the girl that used the super duper thick permanent marker.  I'm never getting those numbers off! 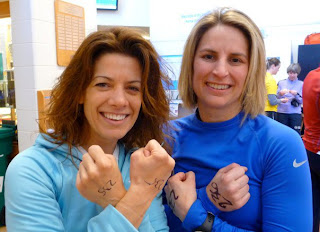 We took a minute to check out the race course and make sure we knew where the heck we were going. 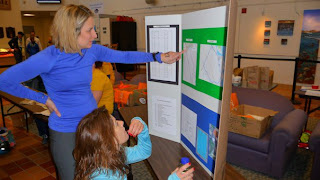 And before we knew it, it was time to line up for pre-race instructions. 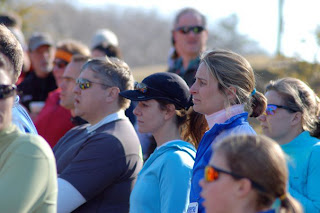 Men went first and then women went 3 minutes later.  And we're off! 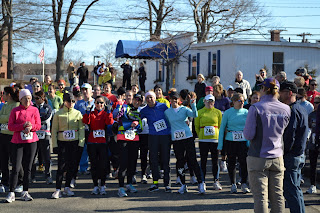 This picture is Jen, myself and B hamming it up a bit before the start!

The run was different as I am not used to running without an ipod or some distraction to keep me occupied mentally.  B and Jen took off ahead of me and I was just trying to keep pace with them.  I knew Jen had a faster time than I and that B and I were similar so if I could keep up with either or both of them, I would be ok.  Once again, I had the driest cotton mouth while running.  This never happens while doing training runs, only during race runs.  I think I didn't drink enough the night before but I also think that my nerves play a role too.  I managed to 'chick' a few guys on the run, although I don't have any photographic evidence of that.....  Here's me hoping not to pass out before I get to my water bottle on my bike. 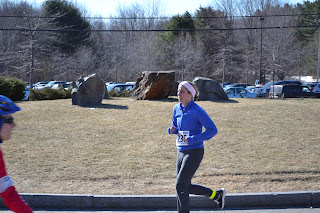 Any critiques on the running form?  I think I look ok.  Off to the transition area to grab my bike. 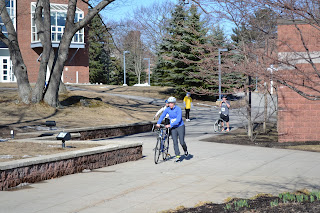 Look carefully, there is a guy getting 'chicked' in the back there.  Twice, I believe, as there is another girl just behind me. :)  As I run the the bike mount area, I am worried about getting my feet into these stupid pedals.  It's the only thing I had problems with.  And of course, as luck would have it, I can't get my feet into the stupid pedals.  Right there in front of everyone.  My husband took some great photos of my struggle.  :/ 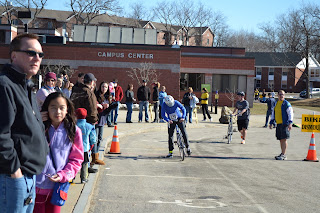 Same guy just about to get 'unchicked' cause I can't get my foot in the pedal cage!  (don't worry, I re-chick him down the road a bit.)
Still messing with the pedal.  ugh! 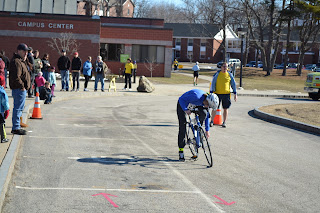 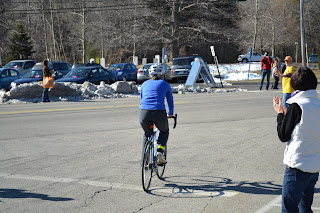 Bike was fine.  I tried to maintain at 20 mph but there were spots that were sooo windy that I had to change gears, it was like going up a hill!  It would go down to 13 mph then.  My legs were burning so much but I could hear my husband and what he said before the race--It's all flat?  Give it hell then!  So that's what I did, I gave it hell!

Back after the bike and headed to the pool.  B had beat me so on the run and maintained her lead on the bike, I couldn't believe she was in the transition area when I got there for the swim.  I dumped everything, tore off my clothes and zoomed to the pool.  Somehow, I got in before her and swam my 6 lengths.  Swim was a little weird as we had to touch the wall and then duck under the lane line to switch to the next lane.   Finally done.

Here is B and I with our winners mugs at the end. 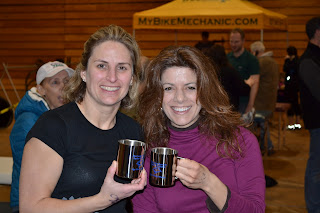 And lastly I have to share the poster my sweet, sweet kids made to cheer me on.  They are so cute and were there the whole time cheering me on.  Even more awesome was how much my oldest was getting frustrated with me for wasting so much time with my pedal!  DAD!  She's wasted like a minute and half!!  (It was more like 30 seconds.  just sayin)  My husband and my parents were there and it was just great to have a day where my family supported me in something that I did.  It was indeed a good day. 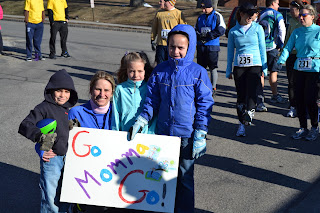 One of my best days ever! Thanks to YOU!! So glad we did this together! :D

It was SO nice to meet you and BD!!
Congrats to both of you for a stellar performance and I am glad to see that two more ladies have been sucked into the wonderful world of triathlon!
I hope to see you again!! :D

Congratulations on a great race!