So Friday was the day that we were scheduled to go on our deep sea fishing trip.  We had previously postponed it from Wednesday--which ended up being a good thing because it poured hard from 6-9 a.m. and the seas were pretty high.  Friday was much nicer--no rain and calmer seas.  Which didn't really matter.... but I digress.

We had to be at the boat at 6:30 a.m. and when we got there we met our Captain Mike and the mate Groovy (real name Craig).  First thing we did was go out and catch some bait.  This was pretty much the only part of the fishing that I actually took part in.  Too bad for me.

The kids were awesome here as we were used to using the sebiki lines that they used.  We went to a couple of different places to get bait and then we were off.  As we pulled out of the harbor, Groovy dumped the fish guts from yesterday's catch overboard. 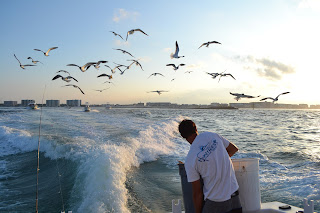 The first part of the trip I was doing ok.  I got a little sick initially but then got over it by sitting out on one of the big fish holders on the stern and breathing the fresh air.  I was able to watch Sissy and Manimal catch their first fish--king mackerel.   Manimal also pulled up a pretty large barracuda which was so cool to watch. 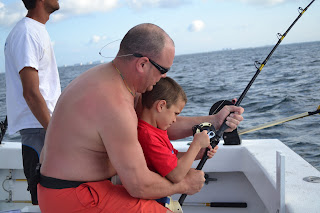 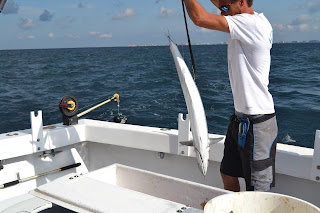 Success!
That was about the time I started my downfall into seasickness misery.  I needed to go to the bathroom to pee badly but I knew that it would only make me feel worse.  If you have ever been on a boat, the worst place to be when you are feeling sick is down in the cabin.  The rolling and rocking is sooo much worse there.  But my needing to pee over took my common sense telling me not to go there and I went anyway.

All hell broke loose at that point.  Literally.  I got sick, like vomit sick, and back end sick and the more I sat there the worse it got.  But I couldn't get up because I needed to finish and clean up, if you know what I mean.  I guess we were done fishing in that spot because the boat stopped it's pitching and rolling and I was able to get myself out of there.

What's even worse about this is that our friends that we visited in Daphne, AL had given me some motion sickness patches to use so we wouldn't get sick, but I totally forgot to put one on the night before.  Stupid, stupid, stupid.

I took a short nap while we drove to our next fishing spot.  I felt better, but really, by this time, the damage was done.  I didn't physically get sick again, but every time I sat up I just felt gross.  It felt better to lay down with my eyes closed so that's what I did.

Hubs had a king mackerel that he was fighting that all of a sudden the line went out, and then slack.  Groovy said it was probably eaten by a shark--and he was right!  Hubs pulled up half a fish! 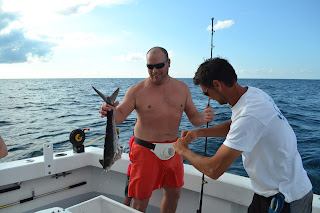 Half a fish is better than no fish!


More king mackerel, grouper and red snapper (which we had to throw back), amberjack and a bonita were caught.  Hubby and Sissy fought one more fish that had been eaten by a shark and then they fought the shark!  It was to the side of the boat and they were about to pull it up when it spit out the hook.   Sissy tried to get a picture of the shadow of the shark underwater but it didn't come out. 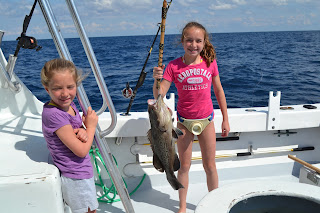 Grouper she had to throw back--it wasn't grouper season. 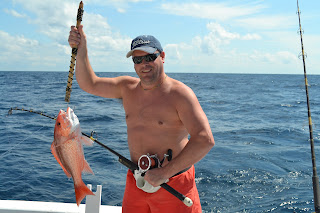 Red Snapper I believe.  Again, not in season so had to go back. 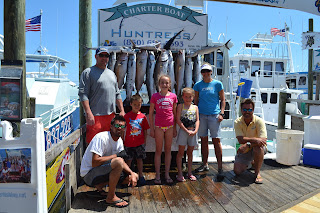 The catch for the day!  Yay us!

All in all it was a great day (for everyone but me) and I didn't mind it that much--being sick that is--because my family was having such a great time.  I wish I felt better so that I could have pulled a fish in myself.  Next time I'm going to make sure I use the patch so hopefully, I can take part in the fishing.

It is a bummer that you got so sick but at least everyone had a great time! I do love your TC outfit though!

Hmmmmm and no patch! Well, I would have been sick with or without a patch. I have so wanted to go out on a deep sea fishing trip here but Bruce brings me back down to reality so I am so glad I could do that vicariously through your blog!!!! Pictures were awesome!!!!