What a spectacular almost week of weather we have had!  It has been 5 straight days of sun and warm!  That's highly unusual for the bi-polar Mother Nature that rules over Maine.  Fortunately, for me, that means I have been able to get out and run 3 times this past week!  This is a big improvement.  I ran in my new sneakers for all three runs and have had my plantar faciitis make an appearance again in my right foot.  Weird.  My new sneakers are the Kinvaras like my old ones--what is different?  I bought this pair on ebay for $50.  Well, on closer inspection, they are the original Kinvara and my old ones are the Kinvara 2.  I wonder if there is a difference or if the plantar faciitis would have just shown up again anyway.  I might try running in my old ones and see what happens.

Saturday was a great day!  I had planned on running 6 sometime that day but then the hubs suggested we meet our friend and go fishing with him and the kids.  I should have known something was fishy (haha, pun totally intended) when he suggested I bring my running clothes.....  Well, I assumed that we were meeting Todd at the usual fishing place about an hour from home.  You know what assume will get you...   Instead he had us picking up Todd and driving 2.5 hours north!!  To the land of Caratunk or for any of you other blog readers, Mandy aka Caratunk Girl's hometown!  Had I known, I totally would have planned on meeting her for a run or bike.

Instead I did the old-mom-sit-in-the-chair-and-watch-the-kids-fish-while-she-reads thing.  Which was just fine really.  No keep-able fish but someone did catch a cute sucker, who everyone wanted to kiss.. 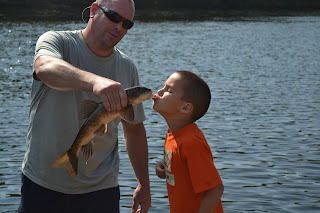 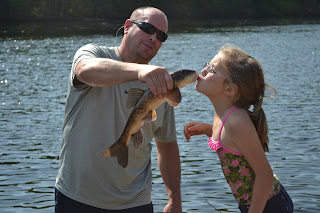 The girls stacked some rocks like what we found in Zion when we were there. 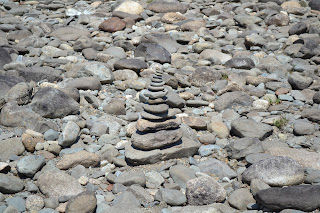 I felt so zen-like I almost starting doing yoga.

Sunday was all about shopping and frog catching.  And I did get my 6 mile run in!  It felt great!  If we hadn't had so much to do that morning, I would have done another 6.  I love the sun so much!!! 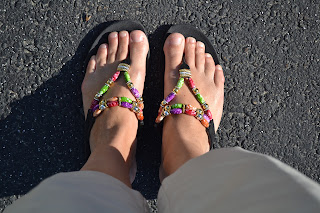 Don't be jealous of my $2 purchase.

And new pollywogs from the pond: 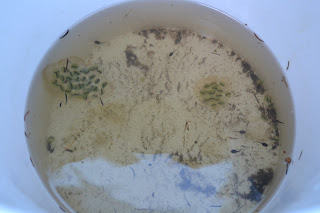 Yes, I am that mom that hatches pollywogs in her home.  Not sure if that makes me cool or weird. 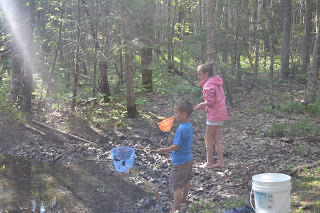 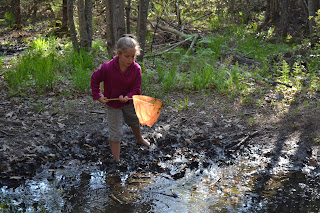 What?  Doesn't everyone let their kids stomp through leech-infested mud barefoot?


Have you had any good finds at Goodwill?


Do you allow frogs/bugs/worms in your house?

Posted by ltlindian at 8:35 AM

Awesome on the 6 miles in sun. Sounds like heaven.

I have yet to find shoes I like at goodwill but I love my t-shirt finds!!!

Hi! I also am from up Caratunk way.. little town called Bingham! You picked a great spot for a fun trip! Last night I wandered around GoodWill and picked up some items to sew myself some runing skirts.. Will be interesting to see what I come up with!