What a weekend this was!  Friday I had to bring my Princess cherub to the dentist to get one of her two cavities filled.  One tooth is almost ready to fall out so even though it is rotting away, the dentist said we didn't need to fill it.  The other is going to be around for another two years so that one needed to be done. 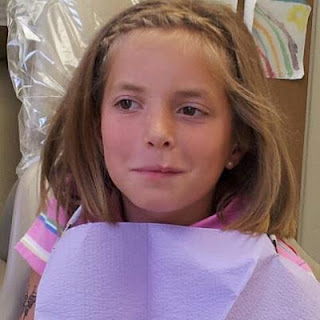 sideways face from the novacaine
We laughed at her all afternoon!

Why this girl doesn't want to brush her teeth is beyond me.  But it is WWIII to get her to floss and brush.  And I'm not kidding when I say that.  I've held her down, bribed, punished, and pleaded to get this 9 year old to take care of her teeth.  I'm hopeful that the cavity filling will make her want to clean her teeth more.  Time will tell.

Yesterday was the day of the Bath YMCA Sprint Tri.  Not the best reschedule day, since it was Father's Day, but the bike course was under 2 feet of water the day it was supposed to be held so I guess it was a good thing they rescheduled.
It was a perfect day for racing--sunny and cool with a light breeze.  Perfection!  I was little worried that it was going to be cold after the swim to the bike, so I packed some warm shirts to wear just in case.

I had no expectations for this race, other than to improve on last year.  I thought my swim had improved, I knew my bike had improved and the run should be similar.  Little did I realize how much missing my swim workout for 2.5 weeks would matter.....

My wave started at 9 a.m.  I was with a couple of my friends from home and I ended up sharing a lane with a friend who I knew was pretty fast.  I was chatting away with him as the last guy from the previous wave exited the pool when all of a sudden everyone was swimming!  Somehow, between my yaking and my ear plugs, I never heard the whistle.  Excellent.

I spent the first 10 lengths trying like hell to calm myself down from the late start and also to not drown from the crazy waves that my lane mate was making.  Good practice for ocean swimming, I suppose...  Of course, I was the last one out of the pool in my wave, 10:38,  ugh.  So much for an improvement on the swim part. 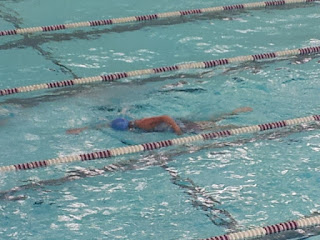 me, trying not to drown.  Notice there is no one around me?
Indian name= Swims Like Manatee 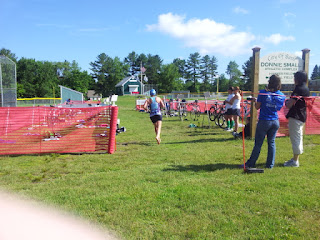 Heading to T1, notice there is no one else in the transition area.  Oy.

Fortunately, I did much better on the bike.  I was at least 1-2 minutes behind everyone so I knew I had to kick butt catching up.  And I did.  I passed at least 6 people on the bike.
Bike time 39:48 for 10 miles including transitions.  They didn't separate out the T1 and T2 times so I don't know how fast I was for those.

Run was 26:00.  My legs felt so sluggish at first right off the bike.  I need to start doing some brick training to improve this.  I have never done a brick...  I still was able to pass a few people on the run as well. 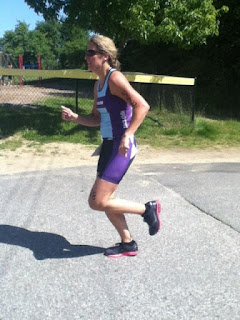 My daughter took this photo with her ipod!  Pretty good form, eh? 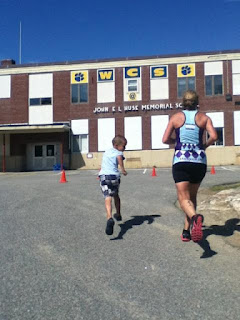 my most favorite picture from the day--manimal and I headed to the finish!

Finish time 1:16:51.  First overall woman!  Woot!  When I heard I was in first I thought they meant age group, not overall.  That was a big surprise to me.  This race had about 40 people drop out because of the date change so I'm sure that played a role in my taking first place.  (My time this year would have put me in 7th place last year so some fast women had other stuff to do today.)  Fine with me!  I ended up with a $50 gift card to a local restaurant for the win.  Thank you because I enjoy eating. 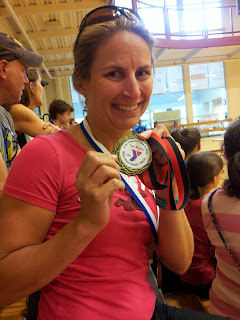 So that was likely my first and only overall win.  I know I need to do some more work in the pool to get my swim time to where it should be.  Especially if I'm going to try to swim in the ocean.  Thank you Cameron, for giving me a little taste of that in the pool.  A rude awakening it was.   I should mention here that Cameron, also from Boothbay Harbor and my wave-making lane partner, won for the men!  So it was a Boothbay Harbor sweep!  He was Speedy McSpeed with a finish time of 59:34.  Yah, whatever, you show off.   Seriously, though, he was super fast and did a great job!

Posted by ltlindian at 9:29 AM

AWESOME! Congrats on a great and a huge win!

Congrats on winning! That is awesome!

Congrats! That's fantastic! Good photos by your daughter too!

Hey a win is a win. Congrats! Love the pics and yay for Boothbay!

Yup a win is a win! Congrats!

Congrats on 1st place, that's incredible....you should be SO proud of yourself!!