1.  Last Friday we took our Girl Scout troop to a local ropes/zip line course called Monkey C Monkey Do.  We had done it another time almost two years ago but they had added higher and harder elements since our last visit.   I was not scared this time so it was pretty fun.  The girls (and Manimal--honorary Girl Scout) were all so brave and tried almost everything.  I was so proud of how everyone worked together to complete levels and cheered each other on.  Teamwork is so awesome! 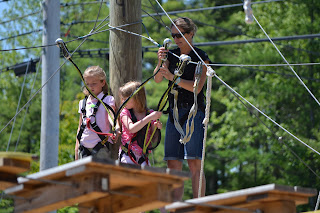 This is probably 30 feet in the air. 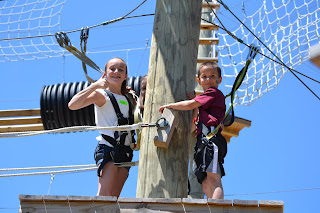 Sissy and Manimal on the second level. 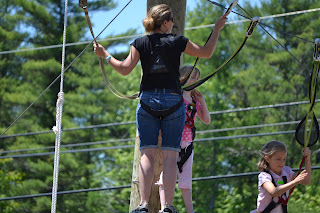 Excellent ass shot.  This is a good look for me, no? 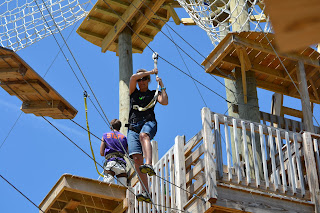 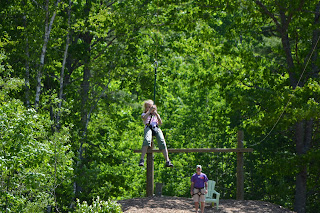 If you live locally and have a chance to visit them, it is well worth it!  We had a blast!!

2.  I am so disappointed when kids (at any level) drop out of sports but especially when they are juniors or seniors.  This seems to happen at the high schools around here fairly frequently.  Kids that have played that sport or sports for ever, just quit when they get to be seniors.  At one high school in my area, there were very few, if any, seniors on the basketball team.   Same with soccer.   And of course, they had a horrible season.  They had plenty of skilled freshmen and sophomores, but it's hard to compete against other schools that have skilled seniors and juniors that have played longer.

It makes me so sad that those kids are giving up that last chance to be part of a sports team.  You never get to do that stuff again.

Why do you suppose this happens now?  I don't remember ever having a team that was just freshmen and sophomores.  Why don't kids feel attached or some obligation to play for their fellow team members?

3.  I feel like I'm starting to get bored of this routine of exercise that I have gotten into.  Routine is usually good, but it's starting to feel like same-old-same-old.  Unfortunately, I only have so much time available to schedule workouts and thus it becomes the same thing over and over.  Spinning is easy to do at lunch because the Y is right there.  I can easily run either at lunch or after work while the kids eat dinner.  Swimming must be done Fridays because that's when the kids are in school and there is lap swim.  I can't plan on a swim during the week after work because often the kids have things that I want to attend or they need dinner.  I know, lazy ass kids can't make their own dinner?  I spoil them.

I used to have a friend who came to spin with me at lunch and it was less boring that way, but her schedule has changed and she can't make it like she used to.  I can't convince the Y to hold an actual class at that time so that leaves me spinning alone.

I'm not sure how to mix it up to make it less ho-hum for me.  I did enjoy my 15 mile bike ride last Friday (before ropes and zip line).  I took the morning off and took my bike down to Ocean Point.  It was perfect--no cars, no death, no rain.  I could do that on Fridays but then I would miss my swim...  What to do?  What to do?


Have you ever done a ropes course or zip line?  Did you love it?

How do you keep yourself from getting bored of the same old stuff?

I've thought about taking Tucker to Monkey C Monkey Do - but he won't even climb a rock wall! Some day! Looks like you had a blast!

We did some ziplining in Mexico and it was a blast! Once I put my fear of heights on hold, I enjoyed it. They even had a water slide element as part of it.

Oh, and the ass shot....looks great as far as a zipline wedgy goes! You should've seen some of the young chicks who had skimpy bikinis or thongs on to zipline. An unfortunate choice for them.

I would love to do ziplining! Maybe I'll be able to try this through my kids at some point.

I'm getting bored of my gym routine, too, but fortunately I think it's about to change. At last!