David vs. Goliath and Proud Moments

This weekend, yesterday in particular, was one of the best moments I have ever had as a parent.  There is nothing like seeing your child go from the underdog to the winner and working hard and earning it.

I was up at the ass crack of dawn yesterday to head to a race.  I was supposed to race a 1/2 Marathon, but at the last minute I decided to switch to the 5K so I wouldn't miss any of Manimal's jiu-jitsu tournament.  And I am so glad I did.


I arrived at the dojo all sweaty and stinky--I was going to shower at the Y after the race, but it was closed on Sunday--so instead I zipped over to Rite Aid and got some wipes and did a whore's bath in the parking lot.  <so much class>

This was the first time Manimal was going to be competing for real against kids he doesn't train with.  It was a 'real' fight with medals and a podium for 1st, 2nd and 3rd.  Big stuff, you know.

It took awhile to get everyone divided into groups based on ability, age and weight.  Manimal's group was the biggest with 9-10 kids.  He was not only the youngest in his group, but also the smallest at 6 years old and 47 lbs.  The other kids were 7-8 years old and larger.


He was the third match and he won that one easily.  Even though there were no submission holds allowed, the kid tapped out after about 40 seconds.  I'm not sure why, but whatever.  The next match was against a kid a little bigger than him, but he was a yellow belt with 3 stripes and Manimal is a white belt with 3 stripes.  (Basically, it means the kid had about a year more experience than him.)


I thought he was done at that point, being in the loser's bracket, and maybe would play another match for third place.  He did have another match and beat that kid--another yellow belt with 3 stripes.  So I thought he had third and was pretty darn happy with that.  But no!  They called him up again for the final match against a kid who was twice as big, and hadn't lost yet.  This kid was 8 years old and 100 lbs against Manimal, 6 years old and 47 lbs.


My sister-in-law turned around to me a that point and said "They can't make him fight that kid, can they?!!?"  I said if he wants to win, he has to!  I knew Manimal would be fine, but I wasn't sure he would win.  No one had even taken the kid down yet.

If you watch the video above, Manimal is in the white gi and the giant is in the blue gi.  The referee is actually Manimal's professor or teacher.  He is not able to coach him even though the other kid's coach is right there on the floor telling him exactly what to do.  I guess it didn't matter much.


So freakin' proud of that kid.  I was shaking from excitement and cheering for him--it was unbelievable.


Here he is on the winner's podium.  You can see just how much bigger this kid was than Manimal. 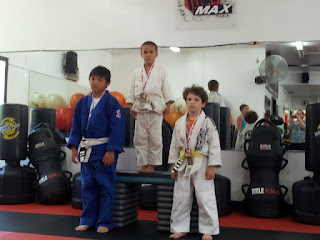 They also had another round of fighting without the gi.  It was less serious and no holds at all were allowed.  He won that one too.

As a side note, I finished my 5K in 24:03, two seconds slower than my PR.  Crap.  Four seconds away from where I wanted to be.  But I really didn't care.  Oh, and I got to meet up with some awesome Tough Chiks before the race! 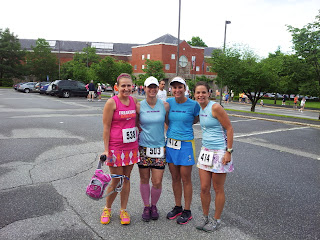 Jill (not a tough chik, but still damn tough), Carrie, Me and Jen
We are like a walking advertisement for Tough Chik and Running Skirts!


What an excellent day yesterday was!  So proud of my little man.

What a great day for you and your family!!! I cannot believe how quick your little guy is and how he took down the giant!!! :) Great job on your 5k! & it was awesome meeting you!!! Can I "borrow" the pic for my blog?

Congratulations to your son! Your 5k time was awesome. I would LOVE to have a time like that. It was so nice to meet you. And, I must confess, I went home and ordered two of those tanks from Running Skirts (one in yellow).