I just got the nod for One Lovely Blog by my fellow Mainer and running friend, Jen, at Running with the Girls.  One of these days I will actually be one of those girls that she is running with, but it has not worked out just yet....    I hope to see her at the Rail Trail 1/2 Marathon in later this month, where I will start out with the girls, but probably not actaully run with the girls as they are much younger and faster than I. 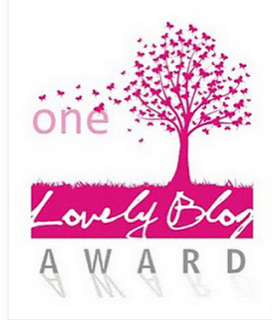 The One Lovely Blog is a way to recognize your favorite blogs in a 'pay it forward' sorta way.

Here are the rules:

1. Post the award logo and and picture on your blog and link back to the person who nominated you.


2. Tell seven things about yourself.


3. Nominate up to 15 additional bloggers who you think deserve the award.


4. Post a comment on the blog of each nominee to tell them him/her they have been nominated.

Here are my seven things:

1.  I am getting my hair cut and colored today.  Finally!!  I have greys and roots everywhere.  I am planning on getting a somewhat different hairstyle.  The put-your-hair-up-in-a-clip-everyday-style is getting old.  And making me look old.  I still want to have it kinda long but I need to be able to style it as well.  I never wear it down anymore.

2.  I pick my cuticles and hangnails.  For some reason, it is not as much in the past few years.  I do think that running/exercising helps curtail it as I tend to do it more when I'm stressed or bored.  Gross habit I know, but I can't stop.  So if you see bandaids on my fingers, it is to stop me from picking already sore cuticles.

3.  Even though they are so bad for you, I love McDonald's french fries.  Unfortunately, there is a McD just down the road from work and it's the only fast food around so in a pinch, guess what I'm eating?

4.  My one, very best sporting moment in high school was not credited to me.  It was in a soccer playoff and we had a corner kick.  I can't tell you how many times we practiced taking corner kicks, where the person kicking tries to get it high enough to reach the striker in the middle.  I (the striker) would come running from the top of the penalty box and try to one-touch it, in the air, into the goal.  Well, this was the one time that it actually worked.  It was like something out of the World Cup and it made the evening news.  The only bad part was that it was credited to my teammate, even though you could clearly see my number on my back as I was making that Pele-like goal.  Of course, back in the dark ages, there wasn't any You Tube so I can't play it for you.

6.  My oldest beat me in a hill sprint the other day.  She is 12 and last time we sprinted I beat her.  This time she decided that she wanted to run with me but she didn't think she could do 6 miles so we just did 3.  As we got the the turn around she decided to wait at the bottom of the hill for me and rest.  I decided to do some hill repeats to make my workout a little harder.  I sprinted the hill up and down then rested.  Then I did it again and rested.  The third time she wanted to race me.  I couldn't catch her.  To my credit, I had just done the hill twice already while she was resting the whole time, but still she beat me.  It won't be too long and she'll have to do hill repeats while I'm taking a rest.

7.  I just won another Running Skirt on ebay.  So that makes 2 this past week and 4 total.  I might be addicted.....  I do need to pay closer attention to the description though, as the last one I bought arrived and it didn't have the shorties underneath.  It was just the skirt.  Bummer.


Do you have any bad habits?


What was your best sport moment in high school?


My nominees for One Lovely Blog are:

I have got two lululemon skirts off ebay lately and loved them both, some of them even used still go for way more than I am willing to pay though.

Bad habits..reading when I should be cleaning. picking at my face

Which running skirt will you sport at the KRRT 1/2? Will you be wearing your Tough Chik shirt too??? :)

Bad habits: biting my nails and avoiding emptying the dishwasher. I don't mind filling it up, but I hate putting the stuff away. :)