I have to say I feel a little bit like this is so stupid to even bother writing about when so many tragic events have occurred.  However, I don't need to rehash everything that has happened.  We all know what happened, we all are grieving in our own way and we all do not want to give that pathetic piece of trash anymore air time than what he is getting already.  I want to remember the innocent souls that were lost and focus on them.  Twenty beautiful babies and 6 brave adults.

Worst week yet, but also my most hectic week.  We had kid's stuff every evening during the week, dance dress rehearsal Friday night, basketball and two dance rectials on Saturday (add in a puking kid in the wee hours of Saturday am just to make things fun) and indoor field hockey tournaments for two girls on Sunday (early morning, of course!).  I forced myself to get on my bike trainer last night so I wouldn't have three goose eggs for this week.

This indoor field hockey club is pretty darn fun for the girls (and me!).  I had a great time watching them both play.  Sissy plays for a U14 team and Princess is playing for the U12 team.  Sissy had a goal in one of her games and her team won the tournament.  Princess' team had two ties and two losses but still they did a great job.  She played goalie for the last 3 games and those were the two tie games.  She was blocking shots left and right and as we sat there, the parents around us were commenting on how little she was but what a great job she was doing.  Each time she blocked a shot, the crowd would cheer!  It was really great for her because she is the one who doesn't do sports.  So to have people cheering for her, well, I was just proud and glad for her to hear that.  The last game, not as good-- she had 6 goals go by her, but I guess you can't do well all the time, right? 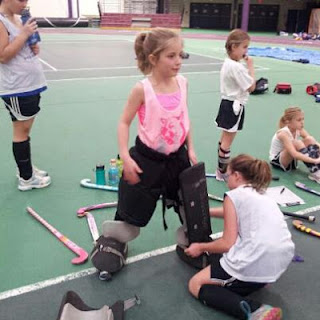 Here she is getting the goalie gear on.  It's a little big.... lol

So this week is a quiet week as far as activities go.  Dance is done until the new year, so is field hockey and there are only two basketball games this week and then that's done until next week.  We have a big surprise coming up but I won't say anymore because of certain folks that might be reading... I'll fill you in next week. :)


I hope this week finds you all well, thankful for your blessings and ready to celebrate the holidays!