Yesterday I headed to the pool for my swim.  I haven't been on Friday's in a while because work hadn't allowed it or the kids had activities.  But yesterday, it all worked out perfectly!  Lap swim was open until 1 and I arrived at 11:30 which left plenty of time to swim my 2000 yds.   As I was getting into a lane the pool director was getting ready to swim and asked if I wanted to join the masters swim.  Masters swim?  Me?

I had been wanting to go to a masters swim session for some time but never knew when it was.  I wasn't even sure if our pool had them or if I was good enough to attend.  I never swam competitively and don't flip turn so I didn't want to be the only one who wasn't flipping like Flipper (the dolphin--dating myself)  but this seemed pretty low key.  Another woman arrived and set up the board for the workout.  It was 3000 yds.  Perfect. 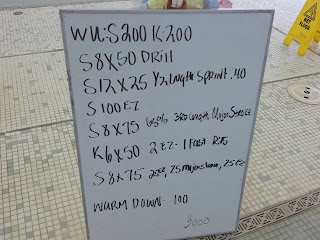 I really didn't have any idea what this meant so thankfully, they were kind enough to decipher it for me.    I started out with the warm up--swim 200, I can manage that.  Then I started on the kick 200.  I thought I was keeping up pretty well and then the two were stopped and standing as I hit the wall for my last 50.  I couldn't figure out how they had finished their kick session so much faster than I cause I was kicking like freakin' crazy and was somehow still behind.  I half thought maybe I was counting wrong.

I caught up on the 8 x 50 drill and stayed with them on the next few.  More deciphering was needed for the 8 x 75 drill.  Swim 3 lengths at 65% with the third length being your major stroke.  Major stroke?  I only swim one stroke.  So freestyle it is.  The counting had me all screwed up on the 75's because I had to count 3 lengths then remember which set I was on.  Really a little too complicated for my brain.  I just ended up swimming 24 lengths and called it good.

The next set was another kick set with more counting in 3's.  This is really confusing to me.  Once again the other lanes actually lapped me on the kicking!  Lapped me!  I was feeling really bad about how slow I was kicking and said something to the lifeguard (we were chatting a little while doing the kick set) and I happened to look over at right time and saw freakin' flippers!  wtf!  They were wearing flippers!  No wonder I was so f'n slow.  Stupid rookie killing herself to keep up with people wearing flippers.  Gah.

Another 24 lengths (cause that counting in 3's thing is too complicated) and the warm down and I was done.  Phew.  3000 yds.  Two of the swimmers were the Y's swim coaches and were really nice.  I hope to be able to join them more often.  It was nice to have an actual plan to follow since I know nothing about swimming and planning practices.  One of them asked me if I used to swim competitively as I had a nice stroke.  Ha.  Glad to hear I don't look like a fool.

Master's swim was a success and I really liked it!  I made sure to leave my email so I could know when the next session was and join them again.


Have you ever done a masters swim session?


With or without flippers?
Posted by ltlindian at 5:36 AM

No swimming gene in me :( But I'm glad I wasn't the only one who thought that writing on the board was a different language!