Wow!  What a busy Monday!  I have so much to talk about--weekend news, race recap, July milage totals--I'll have to split it up between posts so I have something to talk about later this week. :)  Today I'll do the race recap as that's easy and I don't have to add up anything.

Weekend started Thursday night as I had Friday off.  We headed north to Millinocket to visit my cousins and aunt from Maryland.  We don't get to see them much, as you might imagine, so that was great to be able to visit with them.  A lot of my cousins were there and all of their kids so it was a fun day.  The kids fished and swam and we talked and ate.  I had thought about doing an OWS that day, but it was a little cooler than I wanted and I opted to not get wet.

Saturday morning was the 2nd annual Lobster Roll 5K race in Boothbay Harbor (my hometown!).  The race is put on by the boosters club who are trying to raise money for an outside track for the community.  My race buddy BL was coming up for the race that day so I waited at the house for her.  She arrived and we zoomed down to register, as we were running late that morning.  We got there about 10 minutes before the start.  We managed to get the form filled out and pay and then jogged to the start line.  Phew!

I had no thoughts as to what I wanted to do this race as far as a goal time.  I thought I could beat my PR as I feel pretty comfortable on this course, but I wasn't going to be disappointed if I didn't.  It was cooler and cloudy, perfect for running.  I left my ipod and garmin at home--I think I run faster without them.

Turns out I was right about running faster without any technology.  I beat my 5K time again--but just a few seconds!  But hey, still counts as a PR, right?  24:21!  Although, you can see clearly, that I am crossing the finish line at 24:20. 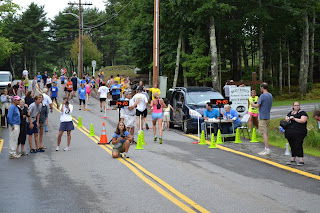 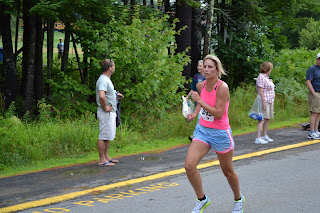 Racing to the finish! 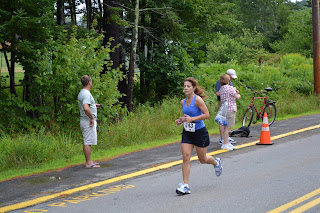 BL heading to the finish!
﻿
﻿Kids race was afterward and Big Sis came in second and Manimal was definately first for his age, but probably 9 or 10th overall.  They didn't really do an official time for the kids so I don't know exactly.  Princess didn't run (of course).  Here's a couple shots of them. 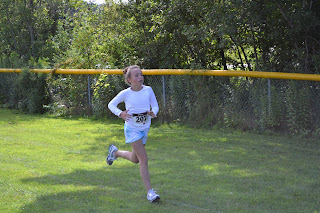 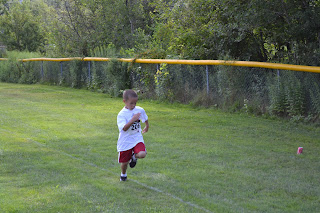 I think in my mind that I run about an 8 minute mile so I don't try to push myself to go faster when training but if I'm racing and I don't know what my time is, I just try to keep up with the people in front of me.  BL told me her first mile was 7:25 and I was ahead of her, so I must have been somewhere in the 7:10 range!  That brings me to the question of the day:  Do you run faster/better with or without technology?
Posted by ltlindian at 10:20 AM

The only time I've ever run a race without music or GPS was the reverse tri.....my fastest time ever (by far!) at that distance... 7:20 for 3 miles. I really should leave it home next time...

What?? No shots with my eyes open?! hahaha ;) Was great to see you this weekend. Proud of S for doing that race even tho' she didn't really want to....and I loved watching D come into the finish....all I could think of was "Dash" on the Incredibles! :)

Congrats on achieving your goal! Yay for Boothbay harbor--wish I would've raced when I was there.

Congrats on your PR! I'll have to try that race next year. I only run with my Timex, but I record my splits. But as far as pacing goes, if my brain is working to figure it out I do, but otherwise I go by feel.