This weekend was so jam-packed with stuff, I may have to divide it into two or three posts to cover it all!  Friday I got out of work around noon and went home.  We all had to say good-bye to our babysitter for this summer. :(  It was her last day and we were all very sad.  She had to leave to get back to Alabama for college.  boo hoo.  The kids were twice as upset because now that meant they had to go to summer camp for the last two weeks of their summer.  They have really enjoyed the sleeping in, eating at home, driving to the beach, watching tv thing that has been their summer with our driving babysitter.  Perhaps it will work out best for everyone as we will get back in the routine of getting up early, packing lunches and going to bed early.

We went to the pool that afternoon and basically had it to ourselves!  I swam my 2000 yds and they played in the kids pool.  That was great!

Saturday was the designated day of the thing I hate most--school shopping.  ugh.  I detest school shopping.  I decided to break it up into parts so as not to ruin the entire day with that misery.  We were just getting school supplies and cleats for Sissy (older daughter).  She is starting field hockey on Wed. and, of course, her freakin' feet grew AGAIN!  (This kid better be at least 5' 10" with all the changes in shoe size we have had over the past year!)  Clothes (which they don't need) and anything else, would be saved for another day of torture.

Suprisingly, other than the stupid summer traffic back up in Wiscasset, (which was backed up 10 miles...), 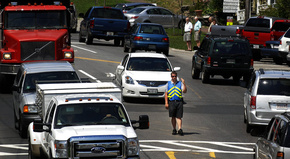 the morning was relatively painless.  We argued over binders and pencils and such, but in the end, we got what they needed and they were bullied into agreed to use binders from last year.  Funny how when you suggest that they use their own money to buy new binders, the older ones suddenly seem ok..... hmmm.....

Both Saturday and Sunday were days of a fishing tournment--but I will save that for tomorrow.  Sunday was a 10K race that I had considered doing but didn't want to mess up the fishing for the tournament.  My husband actually suggested that I run it and the kids would do the kids race, so I said, why not?  It would be my first 10K but I knew that I could do it.  I have been running that distance for awhile now.

I got up at dark thirty because I couldn't sleep and got ready to leave.  I had to give myself around an hour to get there because the race was on the other peninsula which would be about a 10 minute boat ride, but a 45 minute car ride.  I left while everyone else was asleep--they were going to meet up with me later as the kids run wasn't until 9:30.  It was a perfect morning for running, the sun was hidden by the clouds and the temps were cool 68 ish.  It was a little humid and foggy but at least the sun wasn't shining yet!

I thought I might know a lot of people running the race as my optometry office is just down the road from Bristol, but there were only a couple of people I recognized.  It is also a big area for 'people from away' who come here for the summer so I guess the race was mostly those people.  Anyhoo--the horn sounded and we were off.  There were some hills, but I'm used to those, so they weren't bad and the weather was perfect so it didn't bother me.  Around mile 2 I got a cramp, which sucked.  I didn't take any more water at the stations because I didn't want it to get worse and it finally went away around mile 4.  Phew.  I kept a 8:00 pace for the first two miles and then dropped down to around a 9 min pace for the rest.  I played cat and mouse with one lady for the first 4 miles.  We were running next to each other, then she would pull ahead, then I would catch up and lead for a bit.  We did this until around 4.5 miles then I went ahead on a hill and never saw her again.  That made me feel good.  I wish I knew if she was a local--she would make a good long run partner for me!

First 10K=PR!!  53:07  I was pretty pleased with my time.  Unfortunately, even though it was a small race, there were a lot of fast people running so no age group award for me.  That's ok.  I was pleased that I did it and that my time was decent. 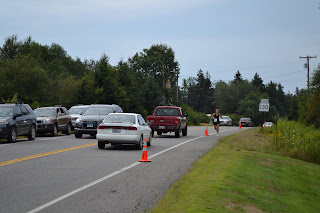 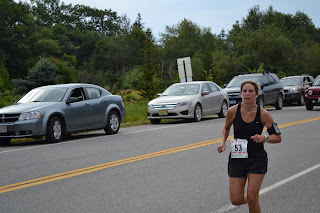 Kids had a great run as well.  It was an actual full timed mile.  (Some of the kids races we have done have been less than a mile, or not timed.) 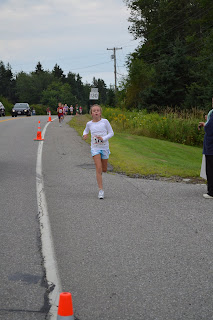 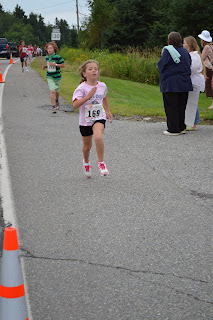 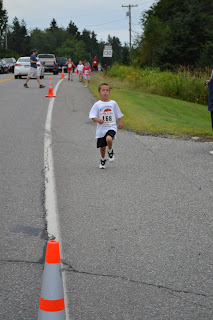 All in all a very nice local race.  I think I'll be back to do it again next year.  Especially since it is a memorial race for a former patient of mine.

So nice to see all the kids running...and that "old lady" too:))) You are awesome- all of you; maybe even Bernie who suggested you do this first 10K! I think that babysitter is pretty awesome too! Hee Hee.

Congrats to everyone running over the weekend! Sounds like everyone had great races!

Congrats on your first 10K!

Oh, the lovely traffic! I went to Boothbay twice last week and will turn right and go through Newcastle and Alna just so I don't have to sit in traffic to get home!

That being said, we should meet sometime to run if you want...from race times I think we are right around the same pace.

Nice job on your first 10k! It is always fun getting a PR! Congrats to the kids to on great runs!