The other part of our awesome weekend was the fishing tournament.  It is a striper and bluefish tournament for the adults and mackeral and harbor pollock for the kids.  Every year that we have done it, we have won at least 2-3 prizes.  This year was no exception.  The kids couldn't catch a harbor pollock to save our lives but we did pretty well with the mackeral.  Princess took first, Manimal got 2nd and Sissy took 5th.  Prizes were $50 for first, $25 for second and $10 for fifth.  Not bad! 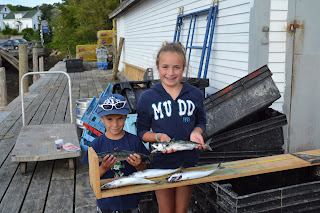 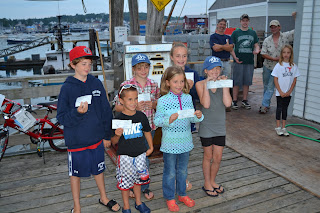 All the kids with their prize money!

﻿
I also had a few random things I wanted to share that I had heard over the past few weeks and they made me laugh out loud.  Funny things that kids and family members have said.

1.  Sissy and her friend on the way home from basketball camp complaining about their team and how none of them know how to play.  Random chattering about not knowing how to post up, or box out.  Then Sissy's friend said, "I'm running back on defense and I yell for help, and everyone thinks I'm hurt!"  I almost spit my soda out.  THAT was funny.

2.  Family on vacation and I lost my good tweezers.  I cannot get my ***man hair out of my chin with the crappy tweezers.  Hubs says "you better find some and get that out, we don't need you going around looking like a catfish".  Ok kinda funny comment, but what was really funny was Sissy about 10 seconds later, finally getting the joke and dying laughing.  Silence.  Silence.  Oh,  HAHAHAHA, I get it!  That's a good one, Dad!  HAHAHAHA.  Kids are just funny.

3.  Last one.  Still on vacation at the camp and Sissy is trying to get this kite to fly.  (no wind, that was the problem)  Anyhoo--hubs is up on the bank barking hints down to her to help her.  He finally goes down to try to get the kite in the air.  5 minutes later all you hear is him--"F*% kin kite.  Piece of shit tail, mother *&^**er.  Sonofab*&ch."  I yell from on the bank, "What did you say, hubs?  We can't hear you up here!"  (snickering to myself)  Sissy yells up to me "Dad was just saying how much he loves the kite tail!"

That kid just cracks me up sometimes!  Happy Tuesday!

***man hair=the beard-like hair(s) that grow out of my chin that make me crazy when I can feel them, but not see them
Posted by ltlindian at 12:19 PM