running in the dark

Well, I did it.  I ran in the dark.  First time ever.  I had to.  Well, actually, I didn't have to.  I wanted to.  I wanted to go for a run yesterday because it was so awesomely warm and sunny but we had so many things to do yesterday.  Sam's Club, groceries, Panera Bread, birthday girl shopping, take the boat of the water etc.  By the time all that was done, it was 4:30 and in our neck of the woods (since the stupid time change) it is now getting dark at that hour.  Crap.

I was determined to go anyway.  The temperatures were so perfect, high 40's, and it was clear and getting close to a full moon.  What a perfect night for a run.  I got my stuff on:  running clothes, reflective ankle straps, reflective vest, flashlight, and headed out.  I looked like a crazed crossing guard. 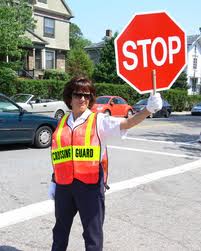 I was a little nervous because we live on a private dirt road about 1/4 mile long, then you come out to another smallish town road that goes along the water.  I wasn't scared about something getting me, but just a little nervous about the dark.  There aren't street lights so the only light would be from my flashlight and the moon.

Once I got out there, it was AWESOME!!  I mean, really awesome!  The temp was perfect, the moon was beautiful and it was quiet and dark.  I think I ran faster too maybe because I was nervous, I don't know.  But it was a peaceful run.  I saw two cars and one other person walking.  She was nuts, however.  Fully dressed in black---um... duh! and not one hint of anything reflective on her.  Good thing we live in east nowhere and nobody is out after dark.  Because she would've gotten hit for sure.


Do you run in the dark?


Any advice for my newly found love of night running?

Be on the lookout this week for 2 reviews and 1 giveaway!  Good stuff is a-coming!  Happy Monday!!﻿
Posted by ltlindian at 1:03 PM

So glad I just read this and so glad you finally did a run that took you a bit out of the "comfort zone". I love running through my development late at night- well, actually have not tried anything later that 10pm but it is totally different and then I do find myself getting iritated with how many people are out driving around. It's like I want the whole place and the whole road all to myself. Selfish I know but I feel that way hiking too. Lol:) Sounds fun to me! Keep it up! I also remember having to get 14 miles in one morning before taking a tennis instructor's class in Damariscotta and running at the bike path in Brunswick at about 4am in the near dark and wondering how absurd I was?!?

I went out the other morning at 5:45a (before the time change)....crazy dark! Have to say, I was surprised to see how many people were out running or walking dogs. It was this whole other social hour in town I didn't know existed. Had to stop and talk to a couple old neighbors which slowed the run down but.... it was all good. :)

At the same time, I did learn that I am not equipped well enough for running in the dark or in the cold. It's hard to hold a flashlight when you are trying to hide your fingers inside your sweatshirt for warmth. I would LOVE to hear others' favorite things for cold and dark running gear.....

You totally made me feel better about running in the dark. If I want to run M-F, I have to run in the dark. I've done it a few times, but out and backs close to my house w/ my cell phone, totally sprinting.

I just got back from a night run with the girls. It was awesome!!! And the moon was bright and temp perfect! If I could run with them every night I would, but it's not possible. I'm just going to have to get out there and run!

SO I run in the dark a lot once daylight starts to leave. Most of my dark runs are in the morning. The key is to be visible! I have a reflective vest (a Nathan one) and sometimes a headlamp...depends on where I go. Anyway, so cool you started running in the dark and love it!! Just be safe!

I don't run in the dark, i am too chicken, but I have no street lights and sometimes mountain lions are in the area, I think that is valid chicken reasons.

Great job to you though!

I'm forced to run in the dark, but have started just running on the track and rail trail instead of the road. A close run-in with a skunk and early morning commuters have kept me off the roads as of late. I was excited, though, that this morning the sky was already turning pink since the time change!

Great job on conquering your fears. I haven't run in the dark for sometime. I just don't run much outside anymore. My coach keeps telling me to run outside but I like my treadmill. I guess I am weird.

I definitely run in the dark at this time of year, though not my favorite thing to do.

One piece of advice that works great is, instead of holding a flashlight, pick up a headlamp. You're hands-free and the lamp usually has a couple of levels of brightness. Worth the cost!

Have fun and good job making yourself visible!

I run in the dark all the time (early morning) and I agree--you feel faster, maybe because part of you is scared. I'm looking into getting some of these guys: http://www.knucklelights.com/

It seems silly but headlamps make me feel like I'm in a tunnel.