About a month ago I signed up for a virtual race called the Freeze Your Thorns Off 5K  hosted by The Boring Runner.  Adam lives in Arizona and in January it could actually be around 50 deg!  The horrors!  So of course, all the wimpy thin-blooded people living in AZ would actually freeze with 50 deg weather.  Unlike us hearty Mainers who would wear shorts and head to the beach in 50 deg.  Hell, we even swim in 50 deg water!  It was 25 deg this morning on my car thermometer and I drove past a kid (boy, of course) waiting for the bus in sneakers and shorts.  It was snowing.  He is just dumb, but you get my point.

Anyway, Adam gave us the weekend to get the race done.  I waited until Sunday to get my run in as Saturday was crazy busy with kids basketball.  Sunday the kids and hubs all went ice fishing so I got the whole day to myself!  I am so lucky!  I got to do the always fun and exciting grocery shopping in the morning!  The best part was, I was all alone so I spent the regular $140 rather than the $220+ that I spend when the family comes along.

It was a beautiful day in Maine yesterday.  Sunny and 35 ish.  Just perfect for running outdoors.  The ice and snow had just about all melted away from previous storms so the road were clear and waiting for me.  I did my long loop around my house which is pretty hilly and 6 miles.  I over dressed a little because it was windy which sometimes made it cold but most of the time I was a little warm.  I'd rather be warm than cold while running so that was fine.  6 miles 56:56.

Here's a pic of me with the race bib on my ipad.  The picture sucks because I took it with my ghetto phone because no one was home (see ice fishing above ^^) to take the photo.  So after about 15 shitty shots, I managed to get this equally shitty halfway decent one. 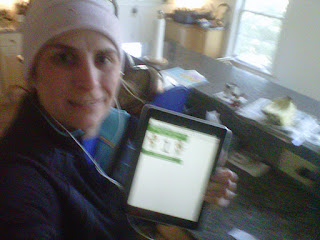 It was more of a sweat your thorns off run for me--I had a insulated shirt, then the under armour jacket you see, hat, gloves (which were stuffed in my pants for most of the run), capri spandex under long running pants and compression socks.  But it was awesome to be outside in the fresh air.  There is nothing like running outside in crisp weather.

Did I mention that I was by myself?  All alone?  No one yelling Momma a million and one times in a row.  It was bliss.  I wish every winter in Maine could be like this one.  Or like yesterday specifically.

Thank you, Adam, for hosting.  Now please pick my name for some cool prize. 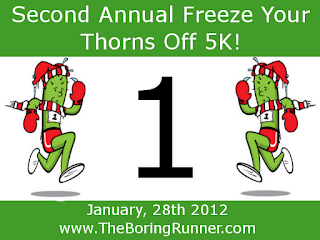 Posted by ltlindian at 7:36 AM

Great day for a run! My run on Saturday was a nice 28 degrees to start but did warm up. I got warm real fast but just shed the gloves and that worked out well.

When the weather turns 50 in Colorado Springs. I jump up and down because that means I can get the bike outdoors!!! Plus, I do wear shorts on occasion for those rides.

haha... we have a kid (a boy!) on our street that has worn basketball shorts every single day to the bus stop... even in the single digits a couple weeks ago! It's become quite an event in our house to look for him every morning. We HAVE been pretty fortunate with the weather this winter, haven't we?! I think we even had a few degrees on you yesterday....up to 40* here...yeehaw! Unfortunately, I didn't get outside for my run. I hit the treadmill at 8 pm instead. That Nor'easter Tri is coming up too soon...