The past week has been a crazy good week of swimming for me.  Winter has finally arrived in Maine and now the roads are icy and snowy and it's just plain cold.  Which means that it's a lot more fun and comfortable to take the kids swimming in the pool rather than to try to run outdoors.  Last Wednesday I got an extra swim day in because I had the closing on my house at 11 a.m.  I had to leave work early for that and it didn't make sense to drive all the way back to work to stay for just an hour (Wed. I leave early to bring Princess to dance).  So after the closing I got 2000 yds in.  Which meant that I could skip the crazy, icy, dangerous, cold run that I normally do while Princess has her class.  Pretty smart idea because that road I run on is a pretty busy route and the breakdown lanes were all icy.

On Friday I had a pretty empty schedule that had me done at 10 a.m.  So I took advantage and ran 4 miles on the track and then swam 1500 yds!  I still had time to go home and do some cleaning before needing to head out to Girl Scouts.

That 4 miles I wanted to get done for Toni's at Running, Loving, Living Virtual Birthday Run.  I ran the 4 miles in about 34 minutes.  You still have time to get in on this race.  She's giving away some pretty cool prizes so head over and check it out.  1/27 is the last day to run.

Even with the ipod, running on the track is unbelievably boring.  I was able to watch some tennis going on in the field house below, but still pretty frickin' boring.  It's also hard not to lose count of the laps.  You need 8 1/4 for 1 mile.  Some of the walkers have those counter things that they click each time they go around.  I so wish my Garmin would work in there--but it doesn't.  The Nike+ thing in my shoe used to work great, but now I don't wear Nike shoes anymore so there isn't anywhere to put the sensor.  Maybe I could tie it into my laces somehow...... I'll have to work on that.

Saturday was a much needed rest day.  I was still sore from P90x on Tuesday and continuous days of exercise after that.  Not to mention the kids had a million and one things to do on Saturday, it was nice to not have to squeeze in running or spinning too.

Sunday I came in early to see a patient that had called me on Saturday.  Directly after that we had to head 70 minutes north to look at a used Volvo to replace the one hubs crashed in Dec.  He's pretty sick of using the truck and spending $80/week in gas when he used to spend $60 every two weeks.  So we drive all the way up there, I drive past the place and notice that the car is in the driveway and he has it running. By the time we turn around and get into the yard, the car has stalled and won't start again.  Good grief.  Hopefully, he can get it fixed so we can go back up to buy it.

I'll leave you with a photo of part of my lunch today. 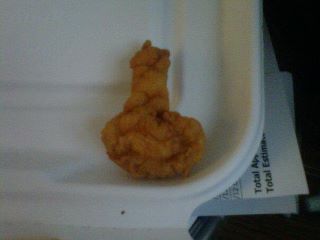 
How do you keep track of your laps on boring track runs?


Any unusual shaped pieces of fried chicken in your lunch lately?
﻿
Posted by ltlindian at 11:54 AM

That is a very unusual piece of chicken!!

Congrats on the swimming! I hope to actually go to my pool tomorrow!

Love the chicken finger - hilarious :) I hear ya on the cold weather running. Yesterday, I couldn't get warm all day after my long run. Brrrr!